Eurasian Sparrowhawk (Accipiter nisus) is one of the most common birds of prey nowadays but by the late 1950's theirs numbers crashed across the UK and they almost disappeared from eastern England.

If you want to photograph Euraian Sparrowhawk in the UK, probably there is no better place than Alan McFadyen's hide in Dumfries and Galloway.

Without a doubt the first day was the best though the  beginning of the day was not promising at all. Four hours of waiting without a sign of a Sparrowhawk was a bit nerve racking but finally an opportunist Sparrowhawk couldn't resist a temptation to visit a feeding station which attracts an extraordinary number of small birds. 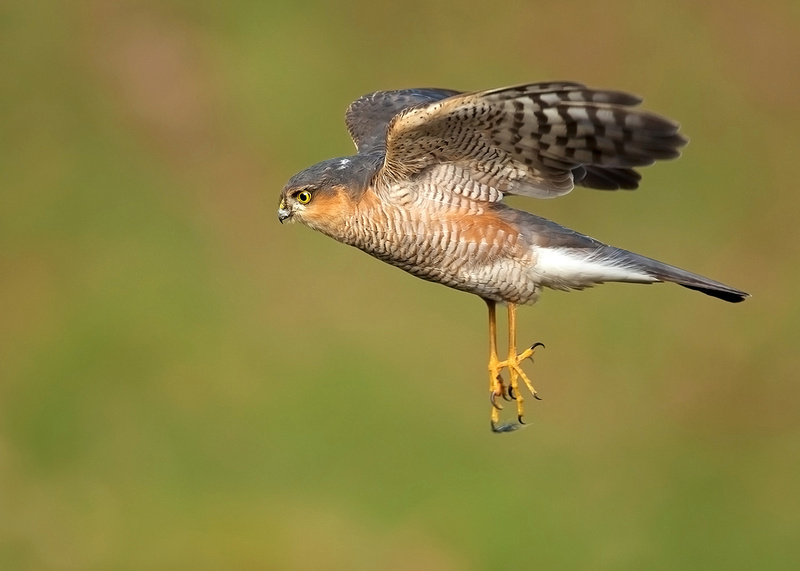 The male Sparrowhawk landed on of the post and scanned the area looking for birds. He looked incredibly focused. 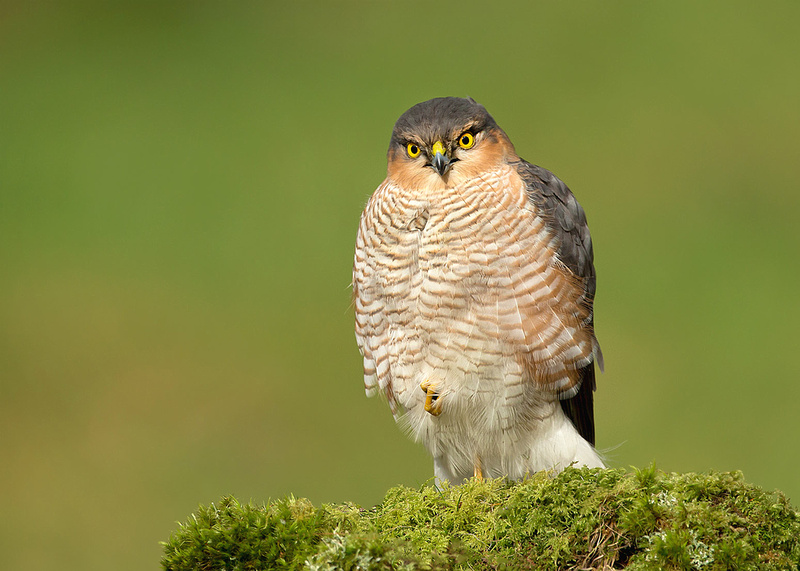 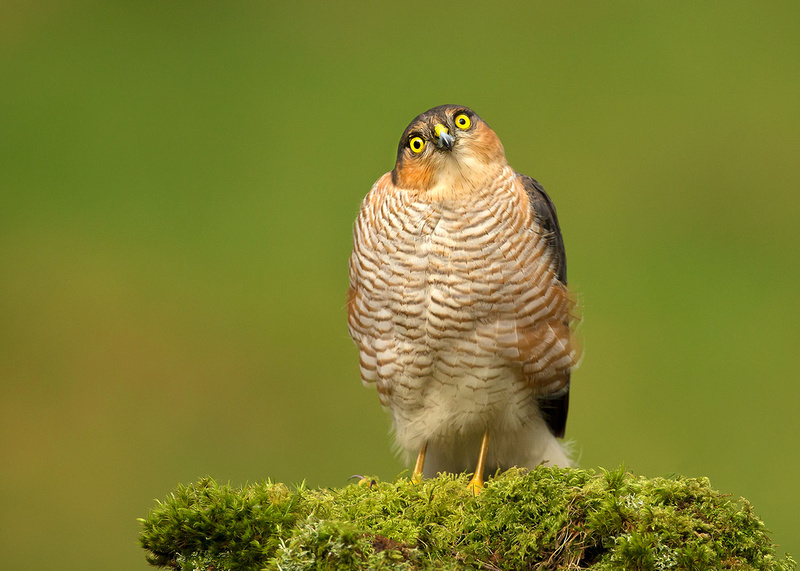 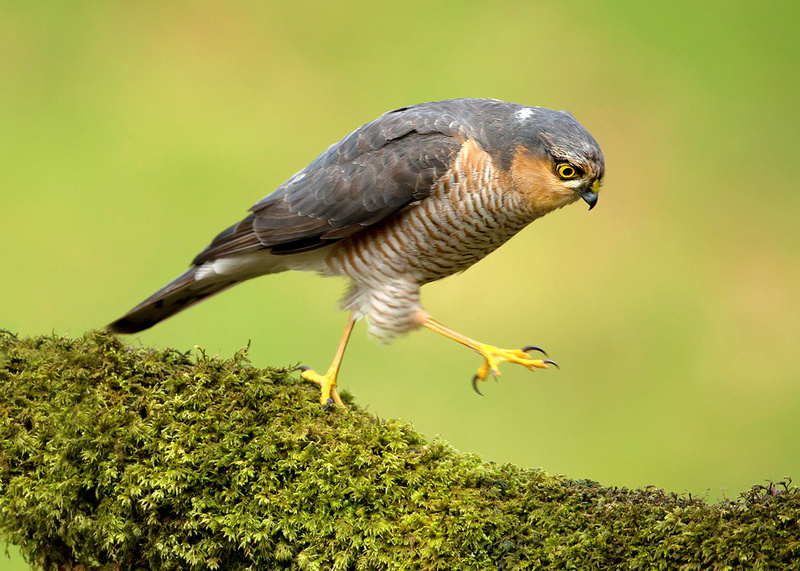 Sparrowhawk is a top predator though only 10% of hunting attacks are successful. This particular Sparrowhawk was quite a good hunter. He was successful on the fourth attempt with a great tit as his prey. 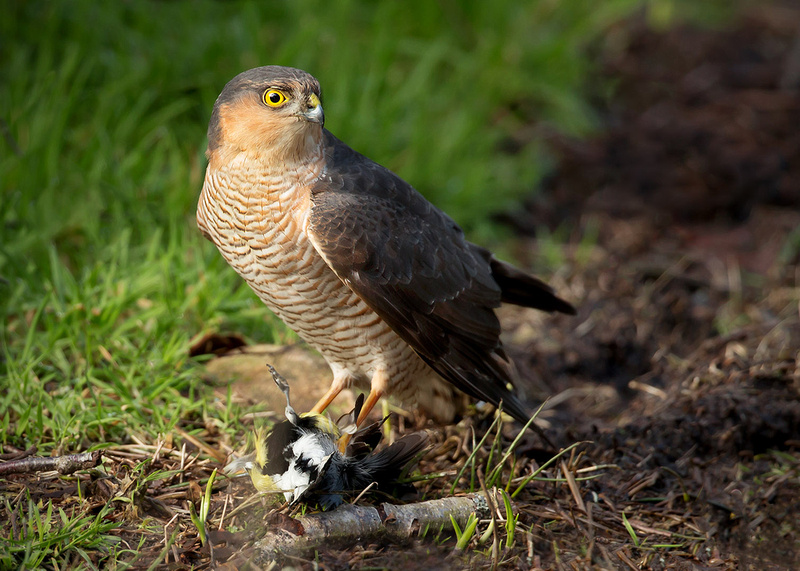 After catching a great tit the Sparrowhawk decided to spend some time preening while taking afternoon sunbath at the same time. 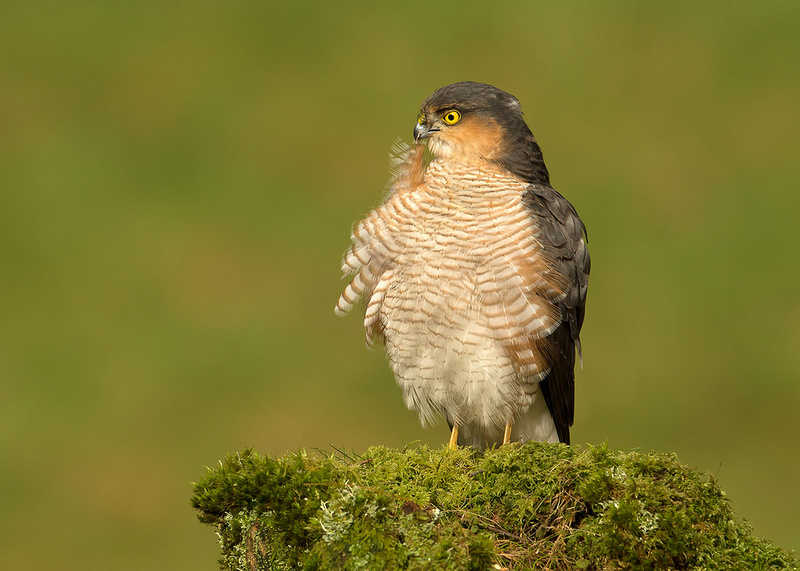 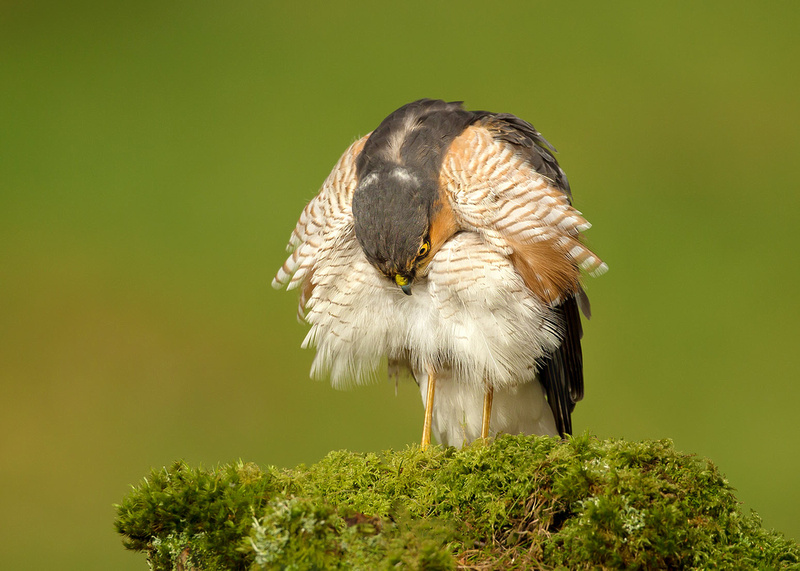 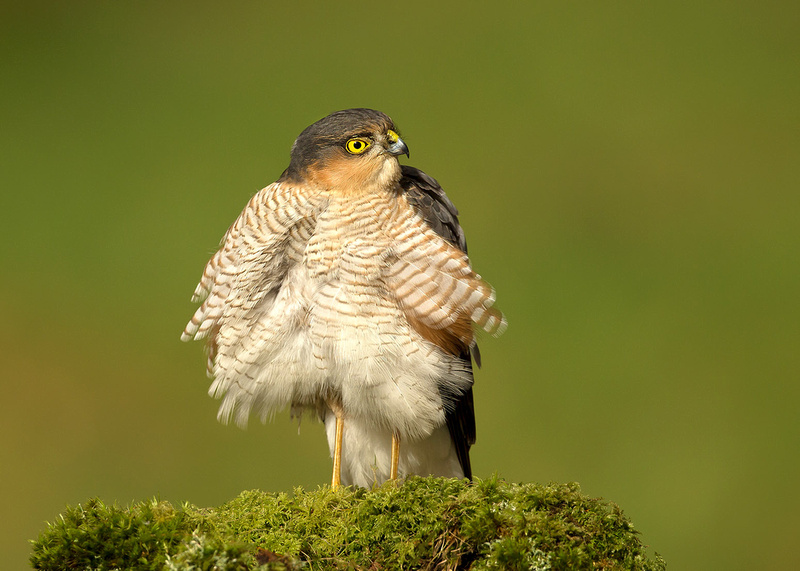 Before he flew back to the woods, he posed for us again. 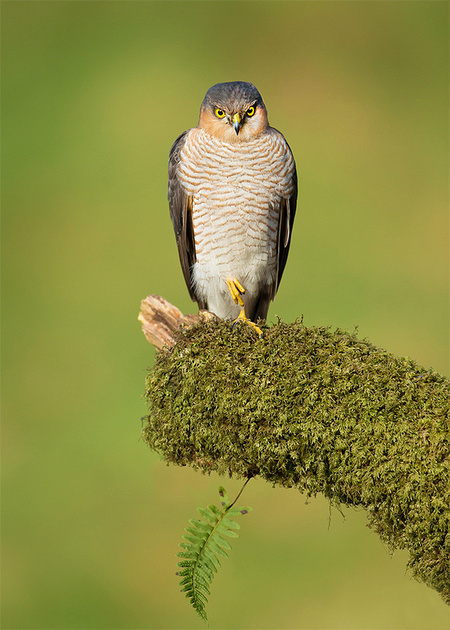 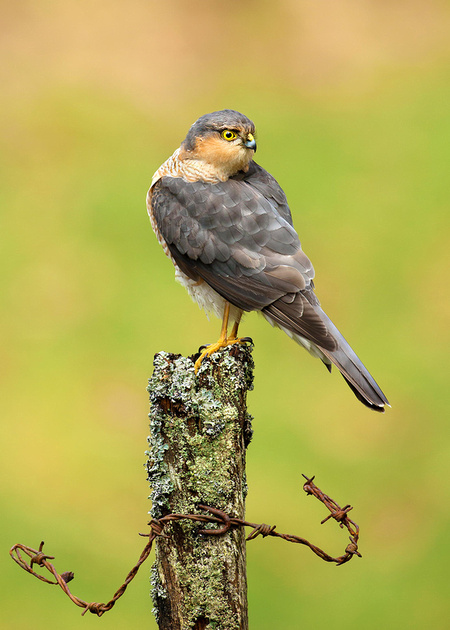 The juvenile visited the site an hour later. 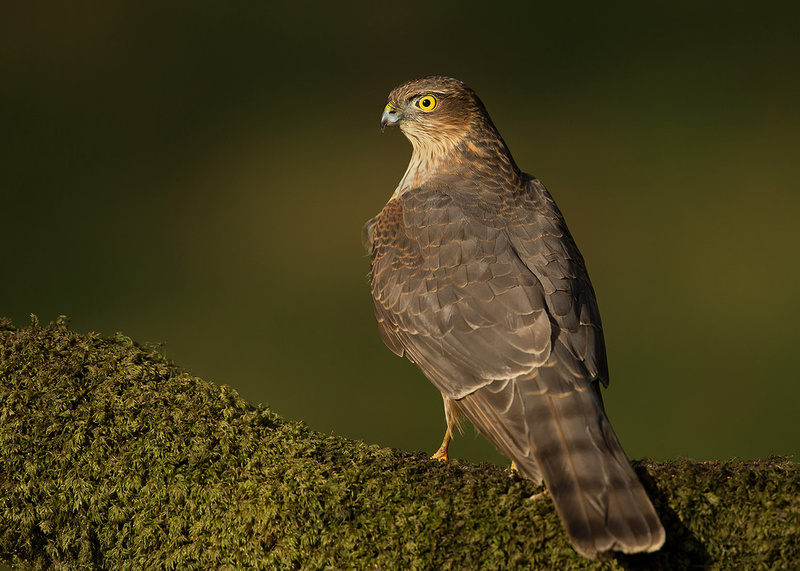 He didn't stay long but was quite active... 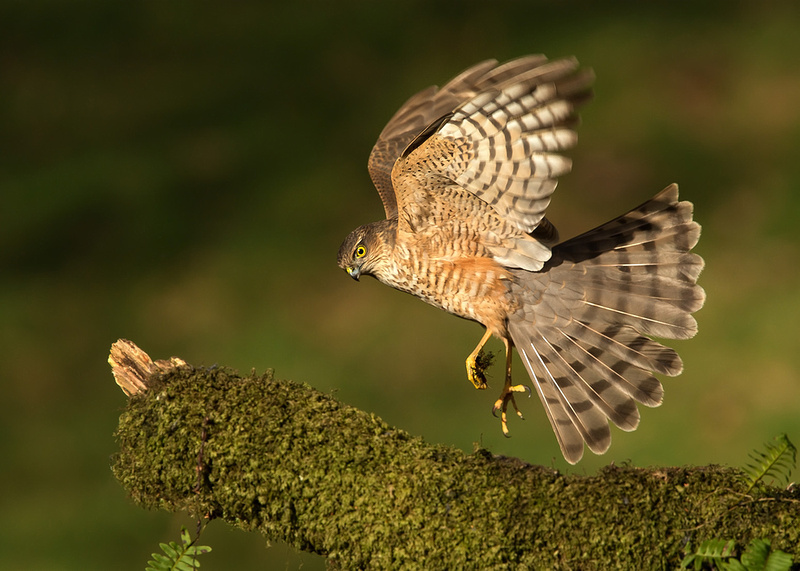 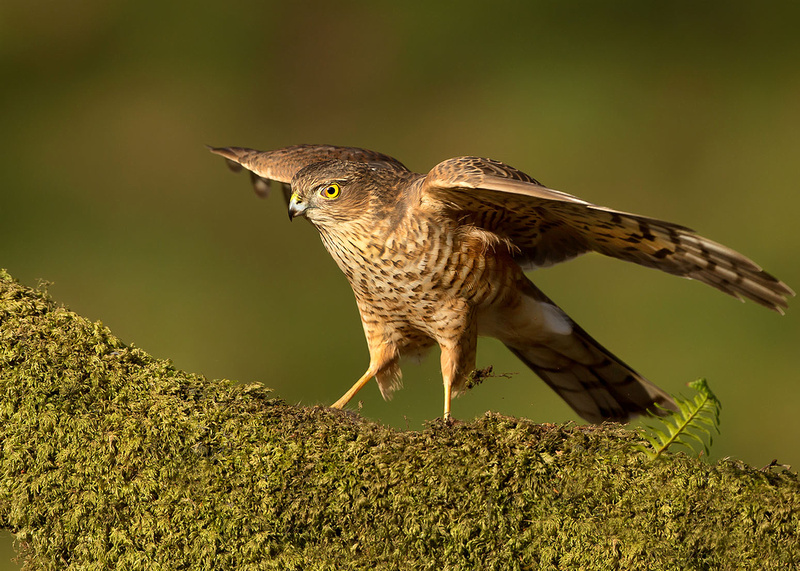 The probability of a juvenile Red kite surviving the first year is only 34%. The average lifespan for a sparrowhawk is 2.7 years, and very few live longer than seven years.

The second day was a mixture of sunny and cloudy weather with a frosty start. For couple of hours we photographed red squirrels and birds. 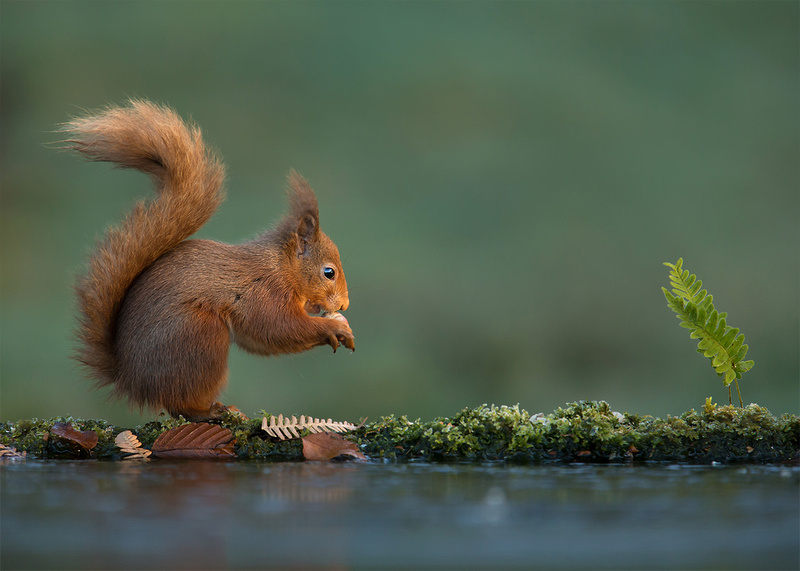 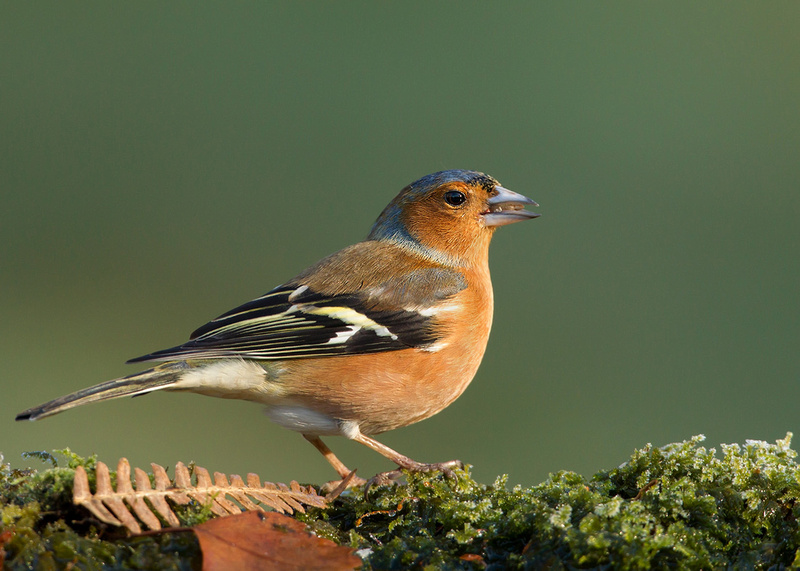 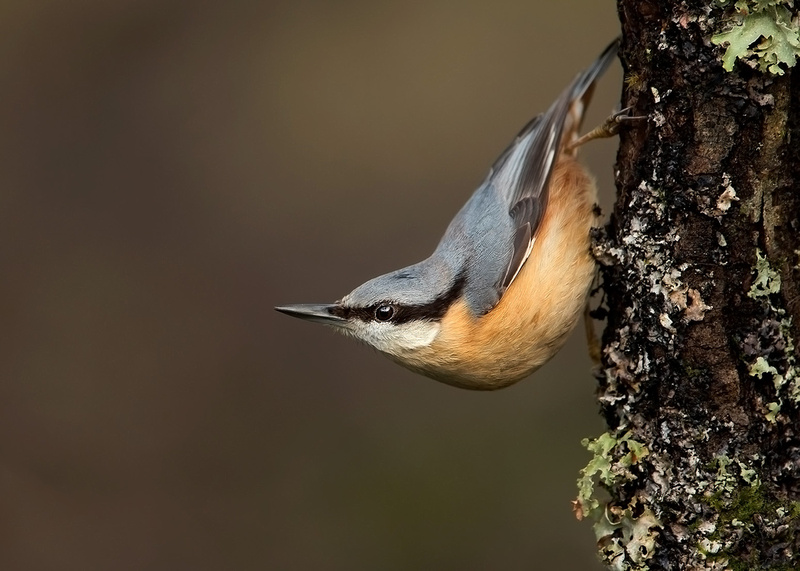 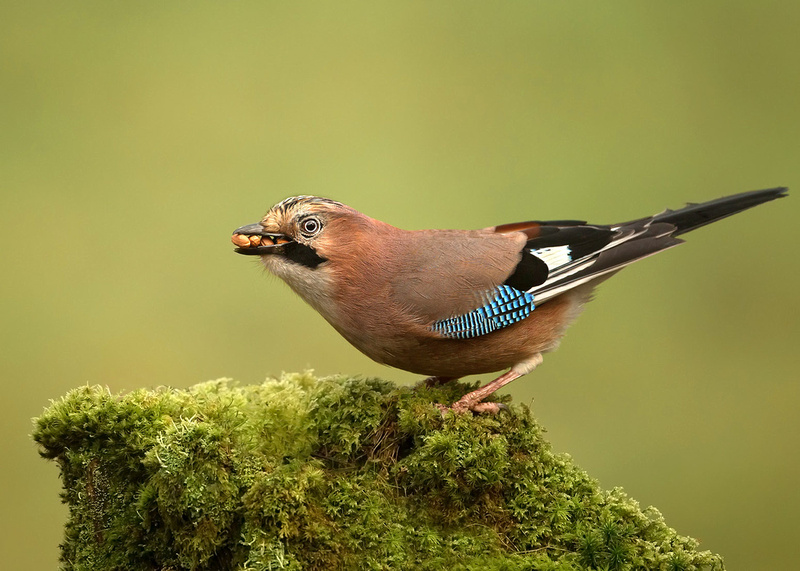 The male Sparrowhawk visited the feeding station couple times but never stayed for too long. Probably he was embarrassed by his short "pants". 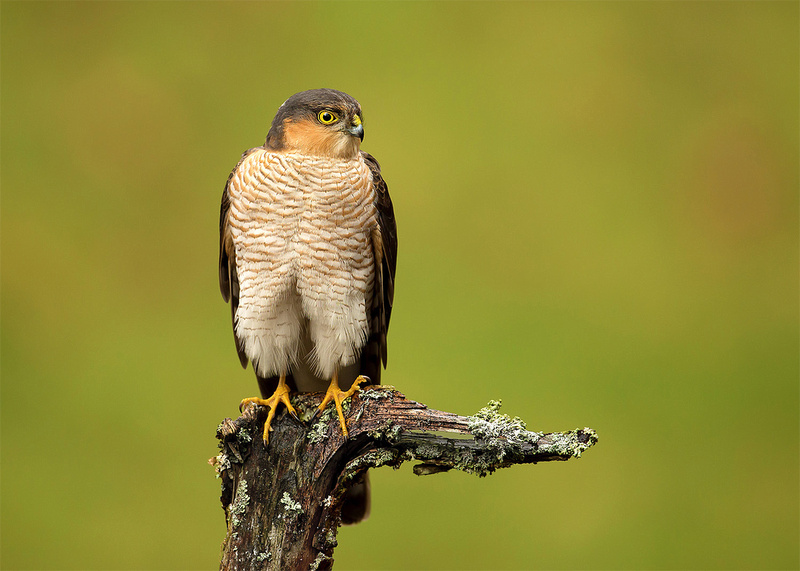 Four hours of waiting without a sign of a Sparrowhawk was a bit nerve racking but finally an opportunist Sparrowhawk couldn't resist a temptation to visit a feeding station which attracts an extraordinary number of small birds.

And he looked a bit grumpy too... 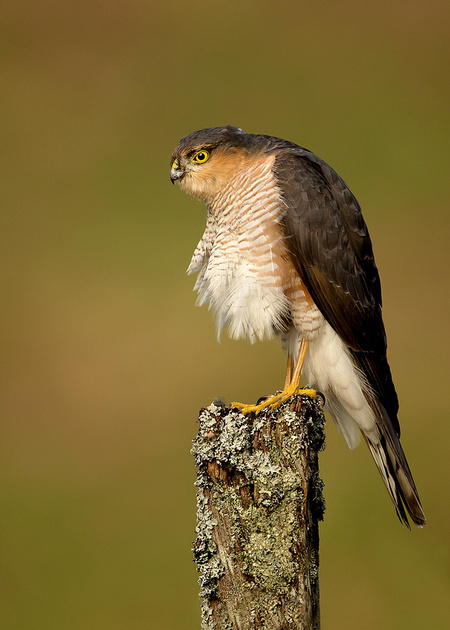 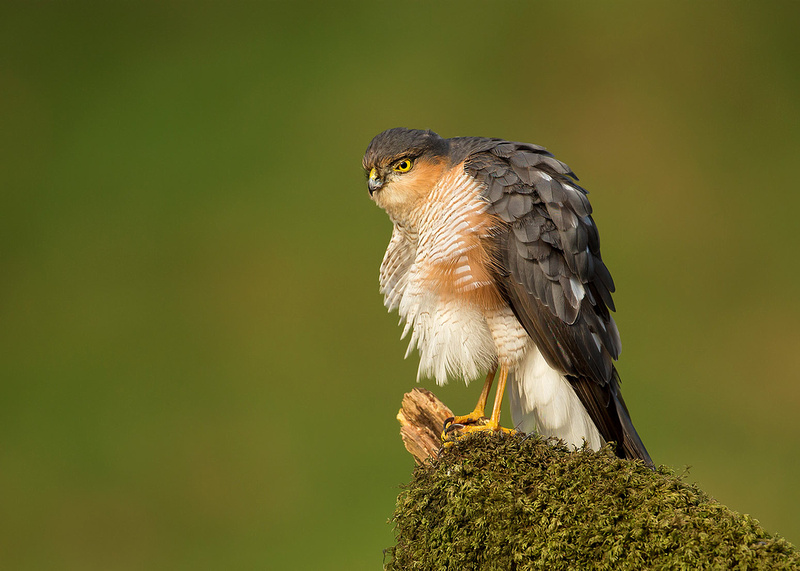 Nevertheless that day he was lucky again. We saw him catching a chaffinch which he took to a plucking post further away. Before leaving the site he landed really close to the hide so we managed to make a portrait picture. 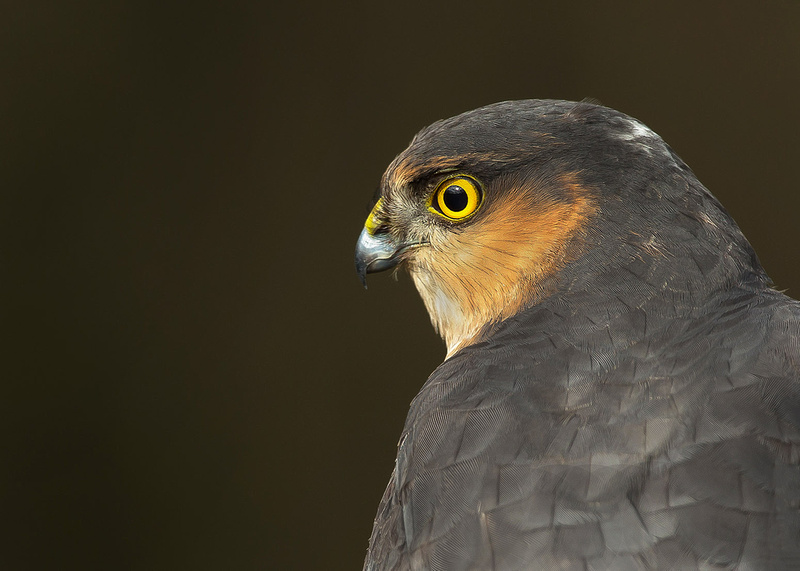 Most of the afternoon we've  spent in the reflection pool hide. Squirrels used to come from time to time, but chaffinches were the most frequent pool visitors. 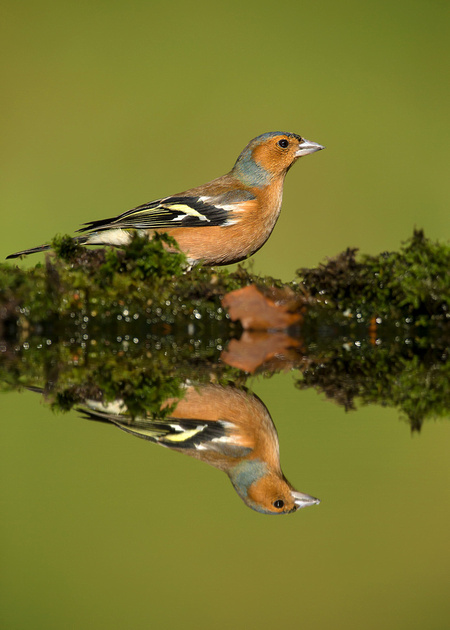 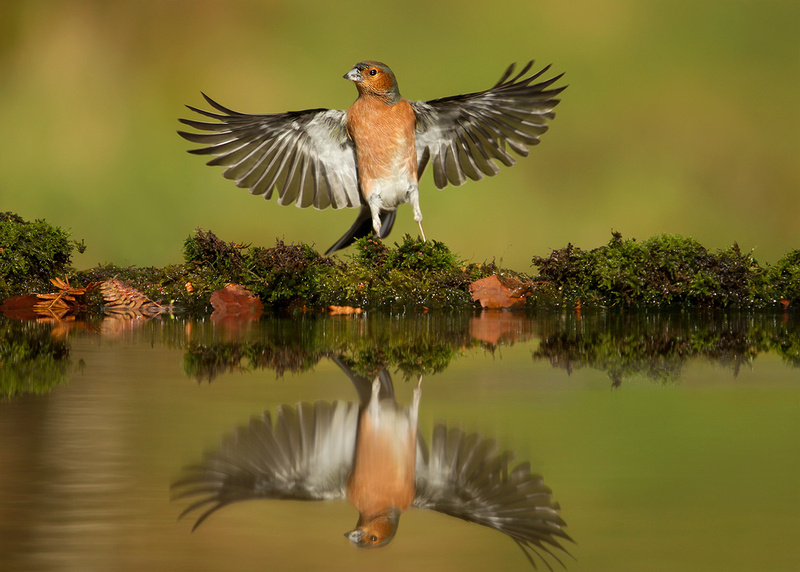 Reflection pool hide attracted variety of birds but chaffinches were the most frequent visitors in Dumfries and Galloway, Scotland. 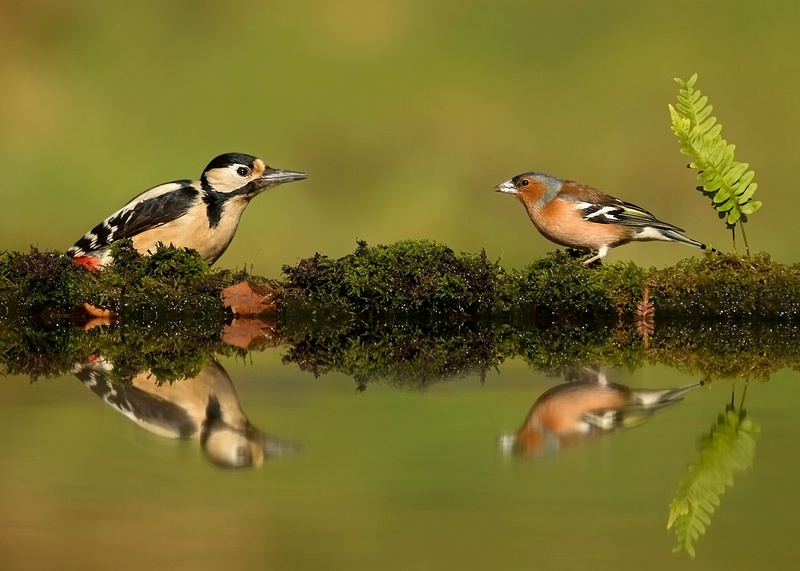 On the third day we were met by wet and miserable weather. 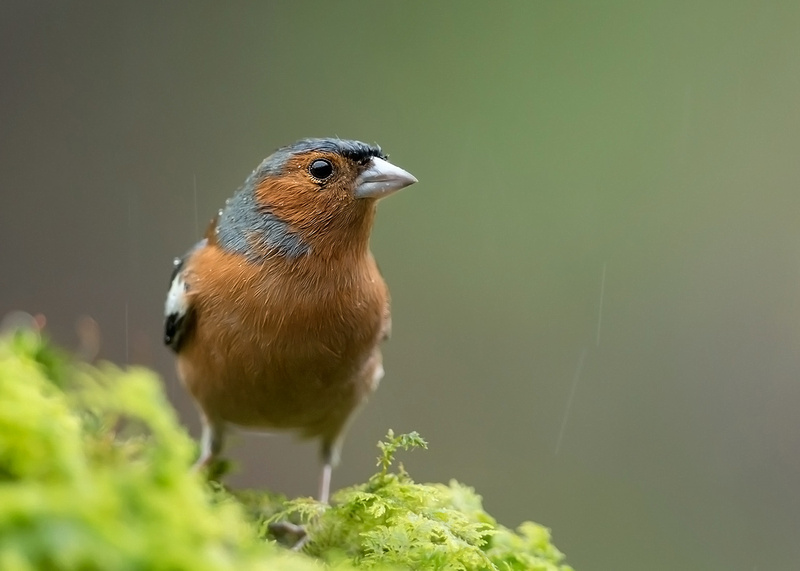 The highlight of the day was a really special encounter with a Great Spotted Woodpecker which was hiding under a hard woody fungus in the falling rain. 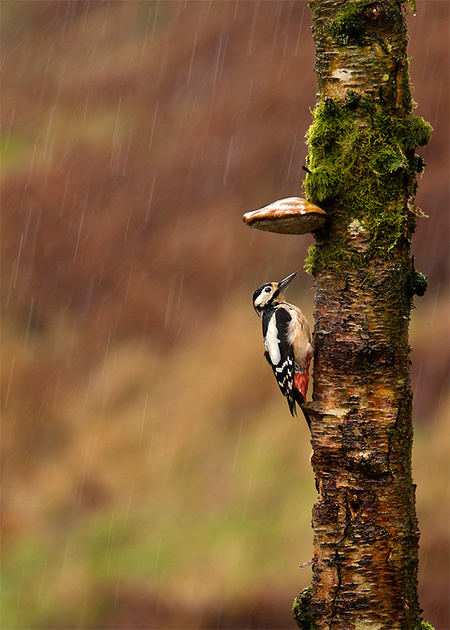 The Sparrowhawk clearly didn't enjoy the rainy conditions. Once he swooped down to hide under branches. 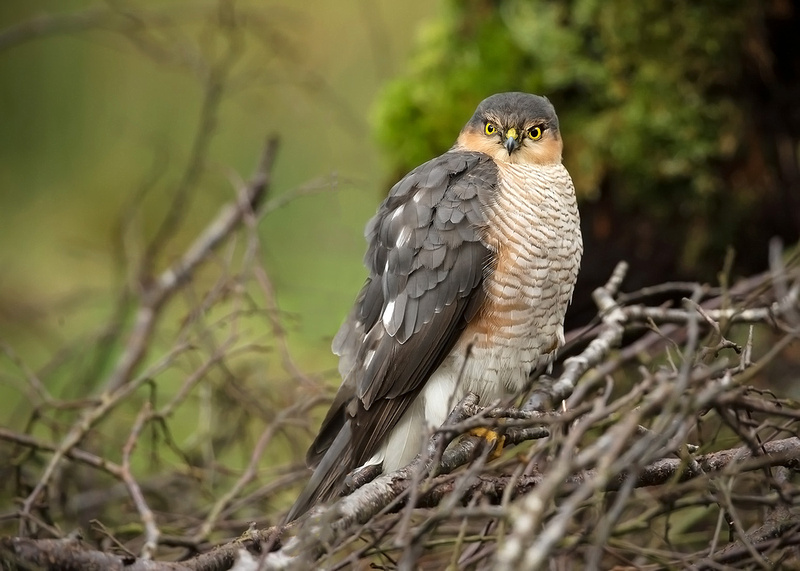 He chased birds couple of times but didn't linger long and soon made his way off.

The next day we started our long journey back to London. The time passed quickly browsing through the photos which brought back good memories. It was a great trip to a wonderful place.