Ethiopia is one of the best kept secrets in the world seeing extraordinary range of wildlife. This corner of Africa offers home to a number of endemic species that cannot be found anywhere else on Earth. Our two – week trip was mainly dedicated to see and photograph this astonishing wildlife including two endemic mammals: endangered Ethiopian wolf and magnificent Gelada Monkey.

Getting to and around Ethiopia 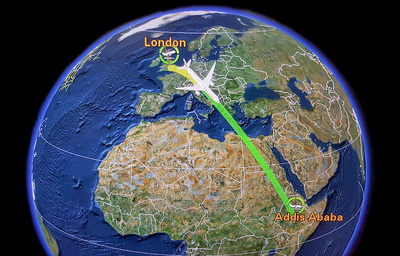 The first week of our trip was planned to photograph Africa's most endangered carnivore - Ethiopian Wolf. The Bale Mountains in the southeast Ethiopia, 400 km from capital Addis host the largest population of this rare and truly unique animal.
Easy and efficient way to get around Ethiopia is by plane. 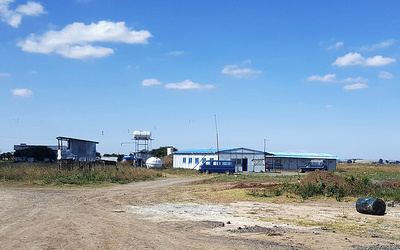 Besides, if your international flight to Addis is with Ethiopian airlines, you qualify for a 50 % discount on all domestic flights.
Domestic flight from Addis to Goba  Robe airport (commonly known as Bale Robe airport) took us an hour. Goba  Robe airport is very basic but a new building is under construction now. Entrance to airport area is restricted, so people who do not fly are not permitted to enter the airport premises. Anyone waiting to meet you will be waiting near entrance to the airport.
If you want to go by car, the driving distance from Addis to Goba is around 400 km which takes 5 - 6 hours. Road infrastructure, though greatly improved in recent years, is still rudimentary. Self-drive car rental is very rare. In most cases vehicle is rented with a driver. An average cost per day is  $130.

Visa is required to enter Ethiopia. We applied for e-visa online from home which was easy and hustle free. The cost is $52.  A list of countries eligible for the Ethiopia e-visa can be found on https://www.ethiopiaevisa.com

We had vaccination for Hepatitis A, Typhoid, Diphtheria, Tetanus and Polio. The risk of Malaria is high in areas below 2000 metres in Ethiopia. As we stayed in the highlands of Ethiopia, we did not require tablets from malaria.

We did take insurance before traveling to Ethiopia but it’s entirely up to everyone’s decision.

There are two seasons: the dry season, October - May, and the wet season, June - September. The best time for green landscapes is from mid - October to January.

Bale Mountains for Ethiopian Wolf and other endemic wildlife

The largest population of Ethiopian wolf can be found in the Bale Mountains in southern Ethiopia.  After arriving to Goba  Robe airport we were picked up by our driver who took us to a nearby town of Goba where we stayed in Wabe Shebelle hotel. It’s a basic hotel but best in the area.

Before heading to Bale mountains where altitudes rise up to 4000 m above sea level, for the next two days we wanted to acclimatize and explore lower areas around the Bale mountains national park headquarters in Dinsho and Gaysay grasslands. Both locations are full of wildlife and they host several rare animals. One of them is endemic and endangered Mountain Nyala. 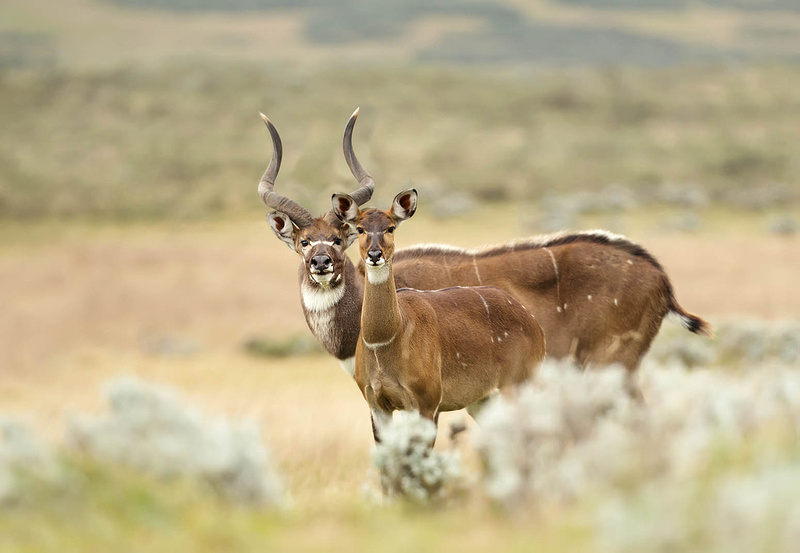 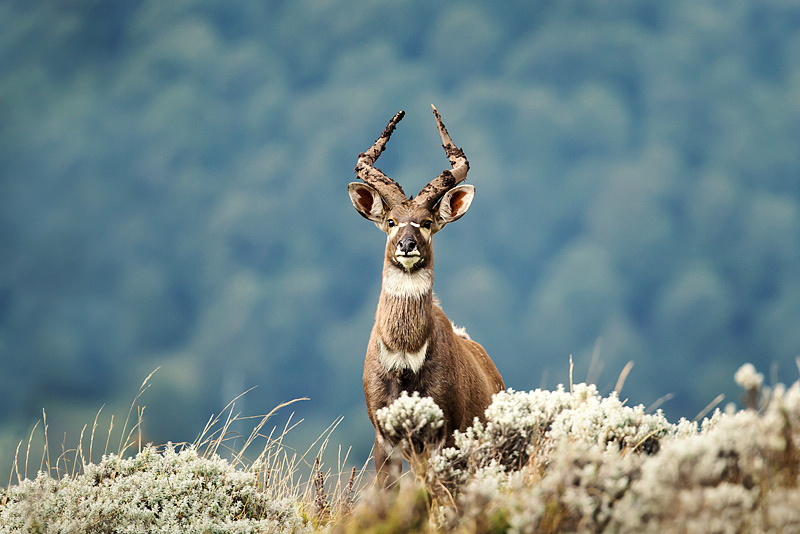 We even managed to spot a Serval Cat. 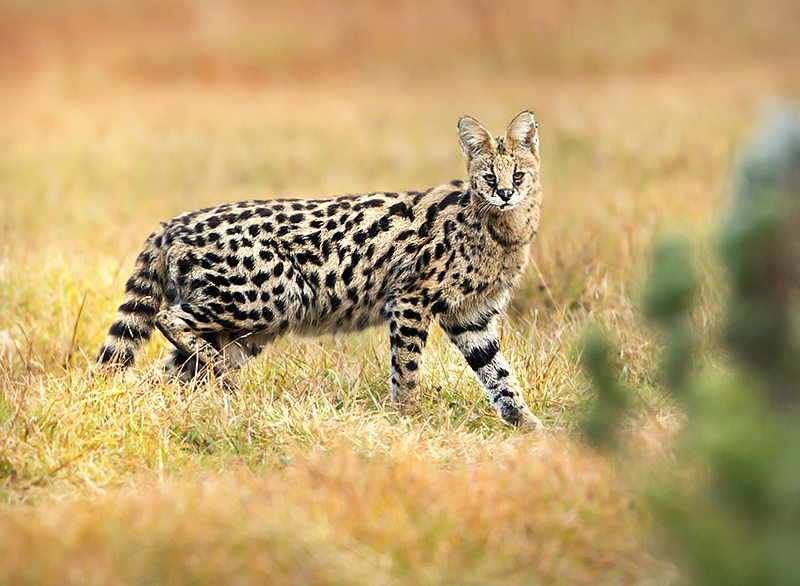 During photography breaks we enjoyed drinking lovely Ethiopian coffee, playing games with local guide and riding tuk tuk to a local restaurant for injera with shiro. 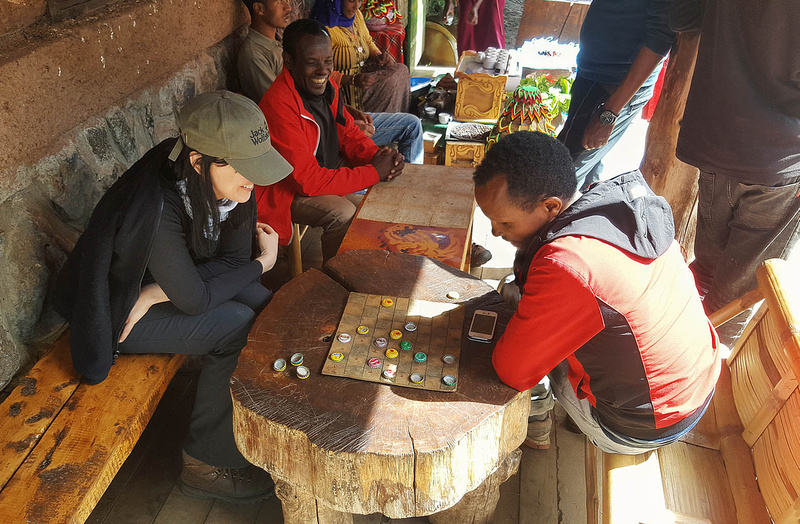 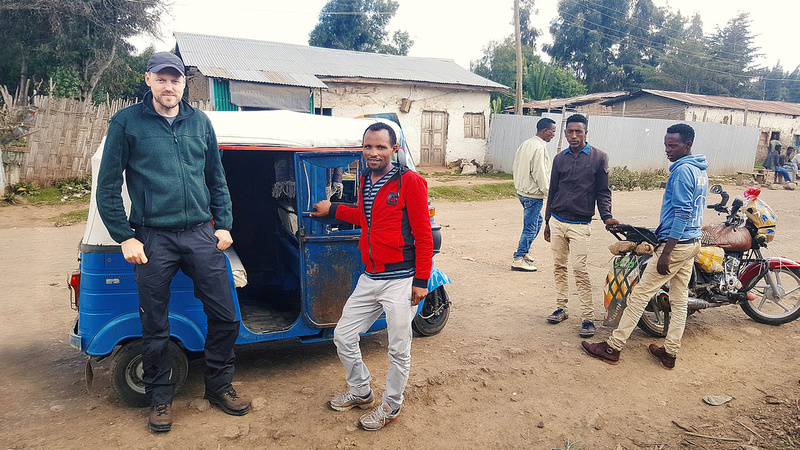 After couple of days we were ready to move to higher altitudes and start looking for Ethiopian wolf which is recognized as one of the rarest canid species in the world and the most threatened carnivore in Africa. 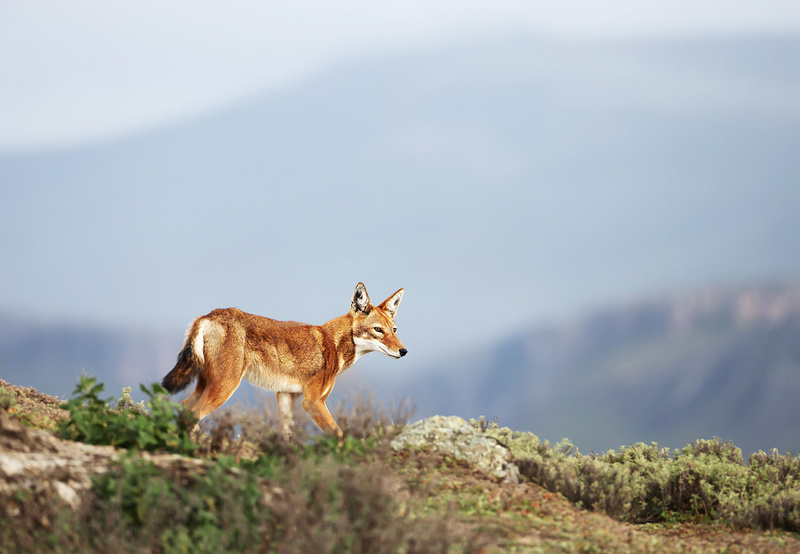 Habitat loss and dog-related disease are the most pressing. There are teams of dedicated people working to save the Ethiopian wolf through vaccination programmes.

Before entering Bale mountains national park, you must pay entrance fee at the Bale Mountains National Park in Dinsho, along with vehicle entrance, camping  and camera fee. While driving to the Web valley in Bale mountains, there is good chance to spot various wildlife. For us the best encounter was with an Augur Buzzard. 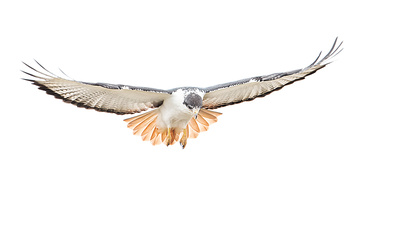 Accommodation-wise there are very limited options inside the Bale Mountains national park. In the Harenna forest there is a high-end Bale mountain lodge. Cost per night is around $200. Elsewhere is camping.
Ethiopian wolf population is around 500 individuals. Bale mountains national park which occupies an area of 2150 square km hosts around half of this population. Wolves are well suited for seeking mole rats and other rodents out from their underground burrows with their long muzzles. 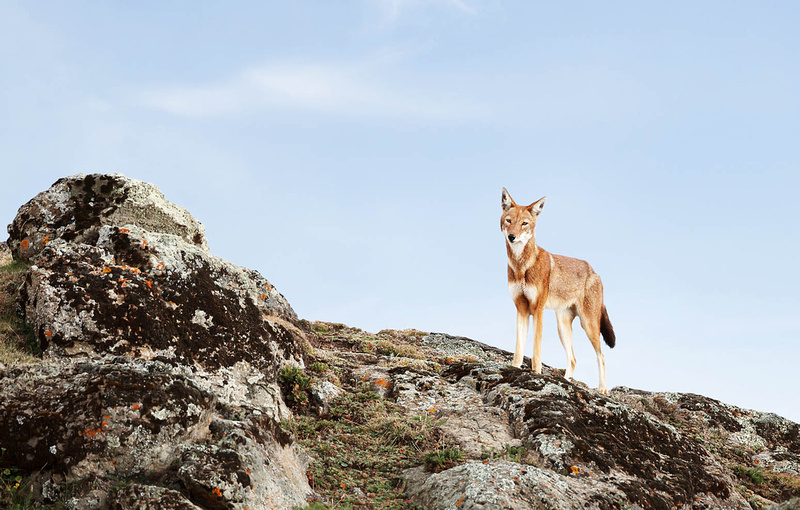 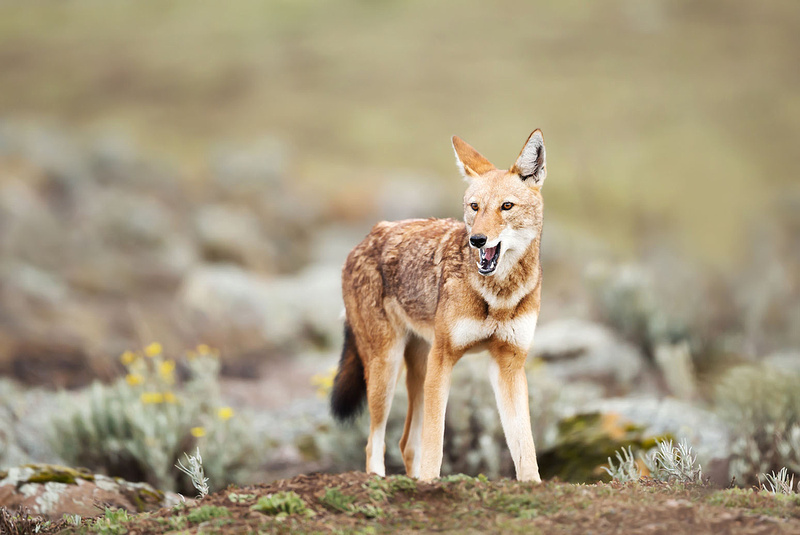 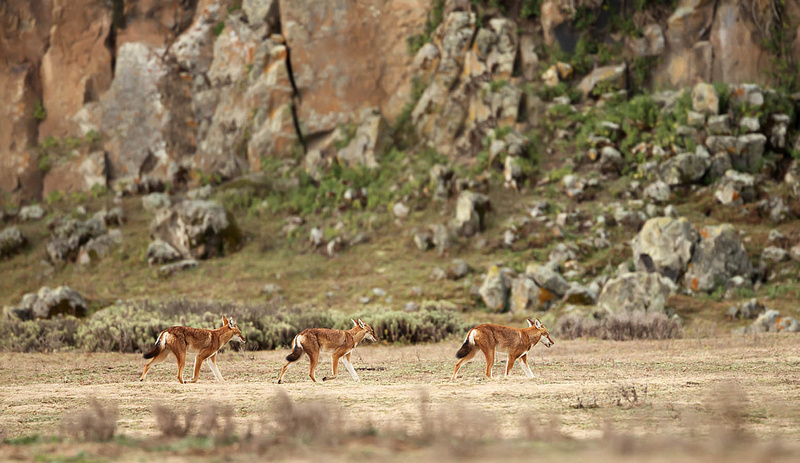 The highest chance to photograph Ethiopian wolf is by driving a car. 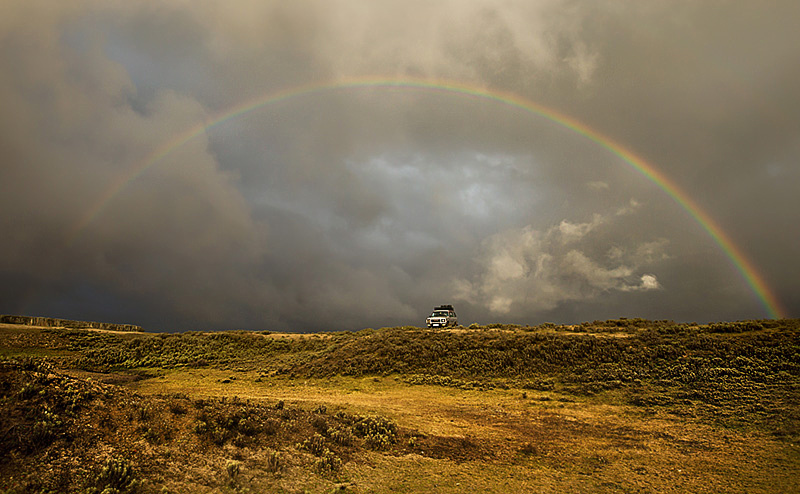 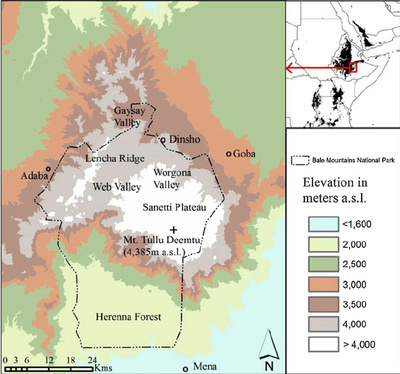 We would highly recommended a car in Web valley as in this location wolves keep a distance and they are not easy to approach.

From our experience in Sanetti plateau wolves are a bit easier approachable. They seem to mind their own business and did not pay too much attention to us.

Web valley and Sanetti plateau host most of the wolf population. Both locations are worth visiting as they offer different settings.

By the way the views from high peaks of Sanetti plateau are breathtaking. Further down a mystical Harrena forest, famous for its impressive trees and Colobus monkeys, is not to be missed as well. 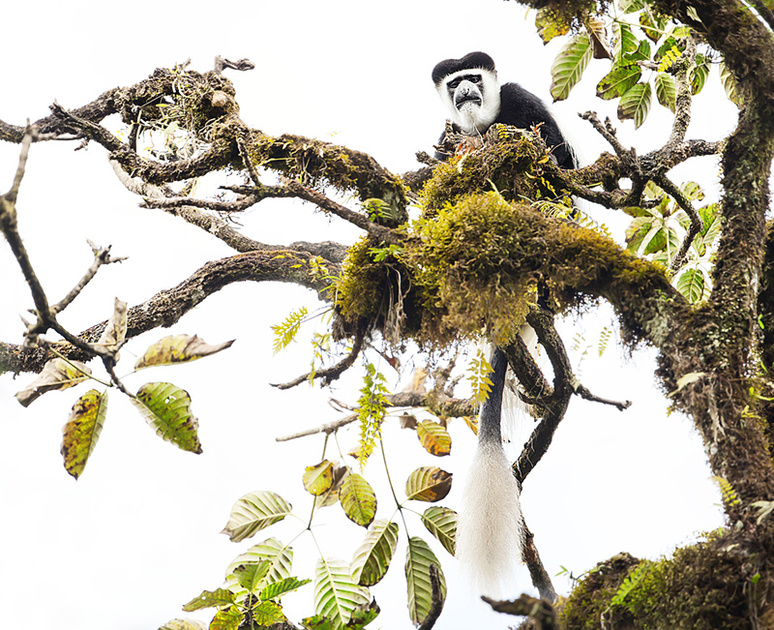 Small villages where you can witness everyday life of the locals are found on the edge of the Harrena forest. In one of them we were greeted by a lovely group of children. 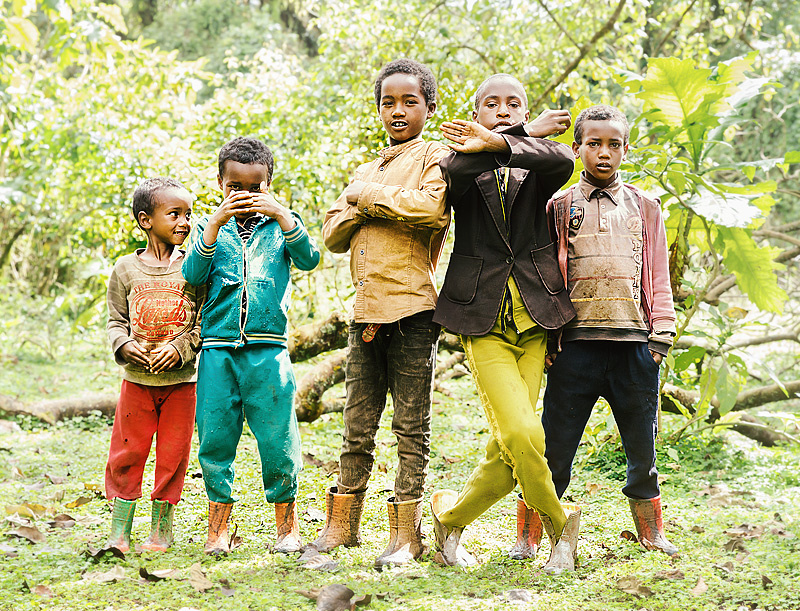 After a week in Bale mountains we headed to Simien mountains to photograph magnificent Gelada Monkey.

Gelada monkeys, often called 'Bleeding - heart' monkeys, are one of the most terrestrial of the non-human primates. They are the last members of their own genus, Theropithecus, ancient grass - grazing primates. An extinct relative was the size of a gorilla and  in large numbers roamed over much of Africa. 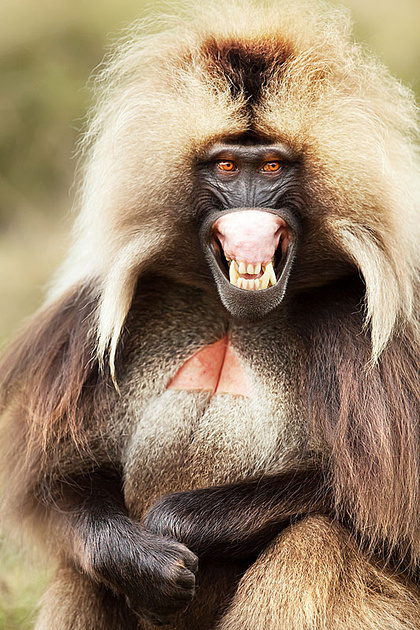 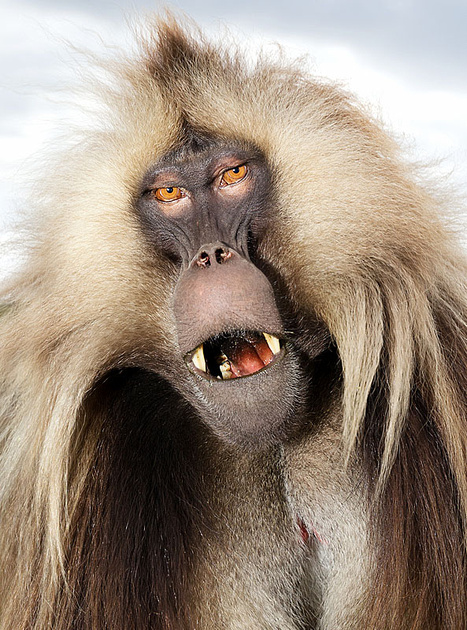 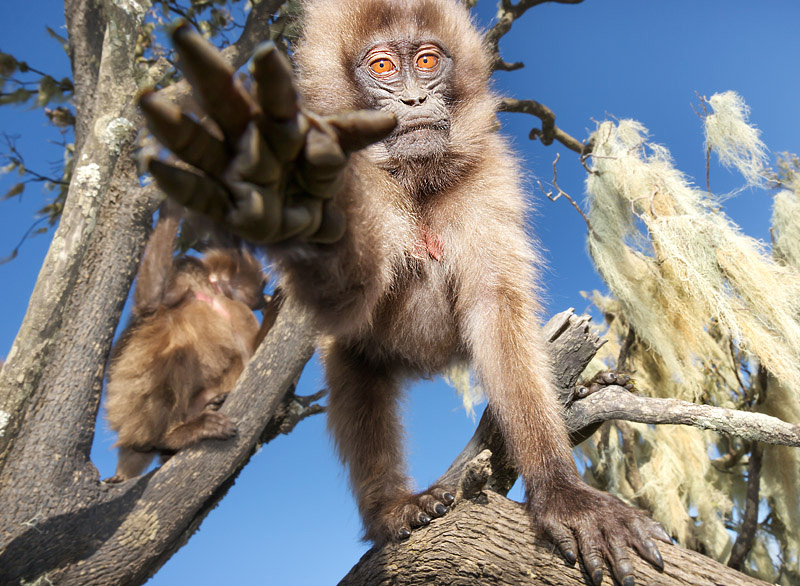 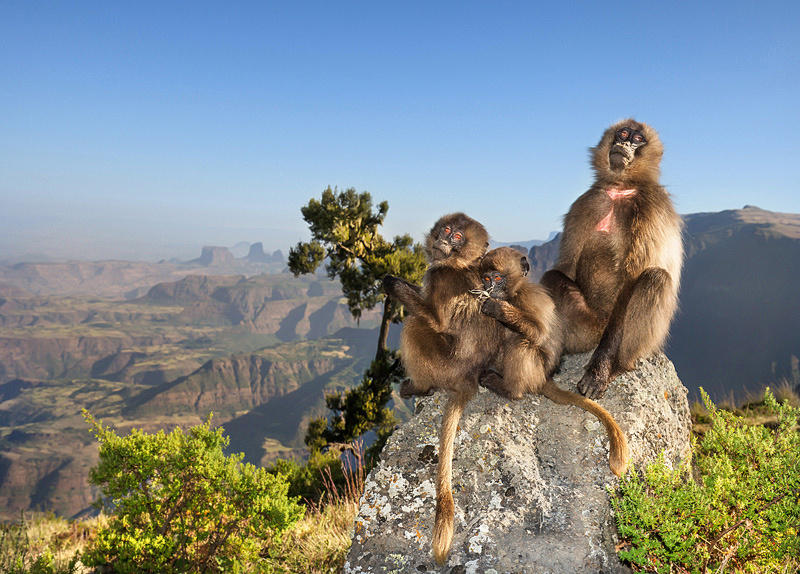 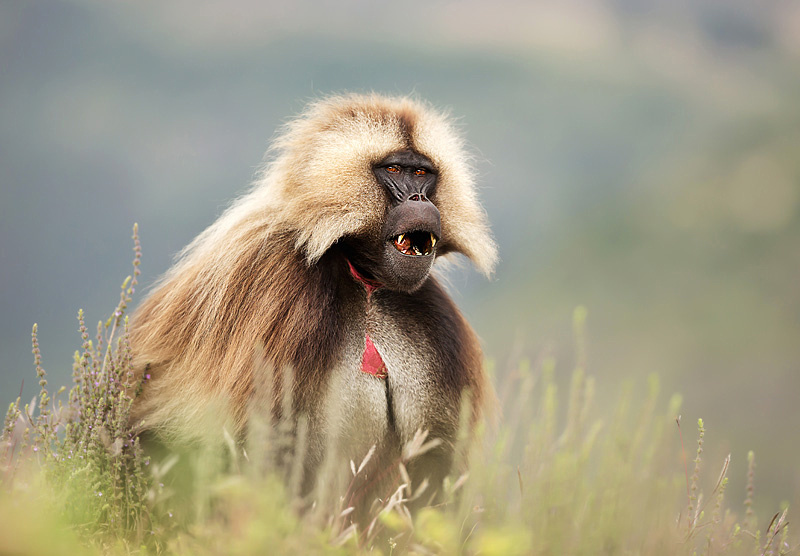 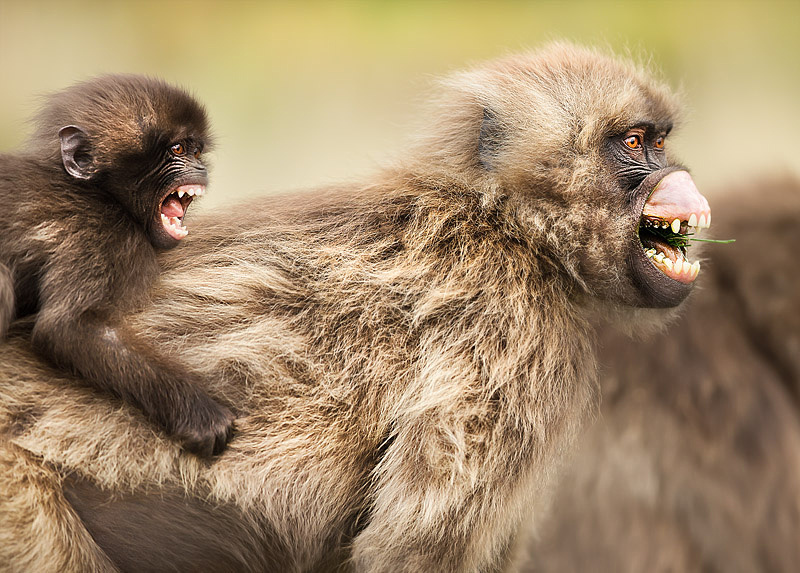 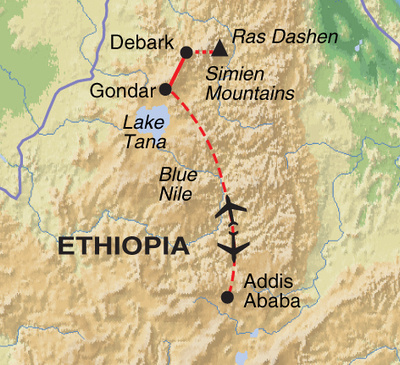 Gondar is the closest town to Simien mountains which can be reached by domestic flight from Addis Ababa.

In Gondar we stayed overnight in Mayleko lodge which is very close to the airport.

The following morning after collecting our missing luggage from the airport, we were met by our guide. Our journey started by driving 100 km to a small but busy town of Debark where the National Park Administration is located. In administration office it is necessary to pay for a permit to stay in the Simien Mountains, and for a mandatory armed scout/guard. There's really no danger in the Simien Mountains. It's more of a job creation scheme. Guide is not mandatory but recommended.

Entrance gate to Simien National Park is located near Buyit Ras, around 15 km east of Debark.

Accommodation in Simien Mountains is limited as well. There is Simien Mountain Lodge situated close to the entrance to the park. The price per night is around $200. It is a good location to see some of the mountains and wildlife. However, if you want to really see the wildlife and high alpine landscapes, camping is the solution.
There are nine campsites in the Simien Mountains National Park as well as three community lodges which are not really recommended for tourists. Campsites are basic. 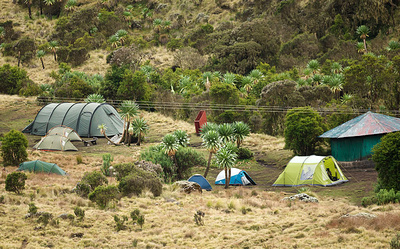 We stayed four nights in three campsites: two nights in Sankaber, one in Chennek and one in Buyit Ras.

We had our own tent and sleeping bags. If you want, you can rent this equipment from your guide. If you rent a sleeping bag, sleeping mat and tent you will probably be forced to hire a mule or a porter to carry your stuff.

The food for us was prepared and cooked by a cook and his assistant in the campsites. Dishes mainly made from pasta, vegetables, eggs, are really delicious, adapted to European taste. If you like chocolate, biscuits, sweets, crisps, nuts or dry fruit we would advise to bring them from home. We brought as well freeze dried meals which were handy on several occasions.

In Simien mountains, guide and a guard accompanies everywhere you go. We want to thank our guide Fenta Adane and guard who were willing to go the extra mile in fulfilling our wishes. 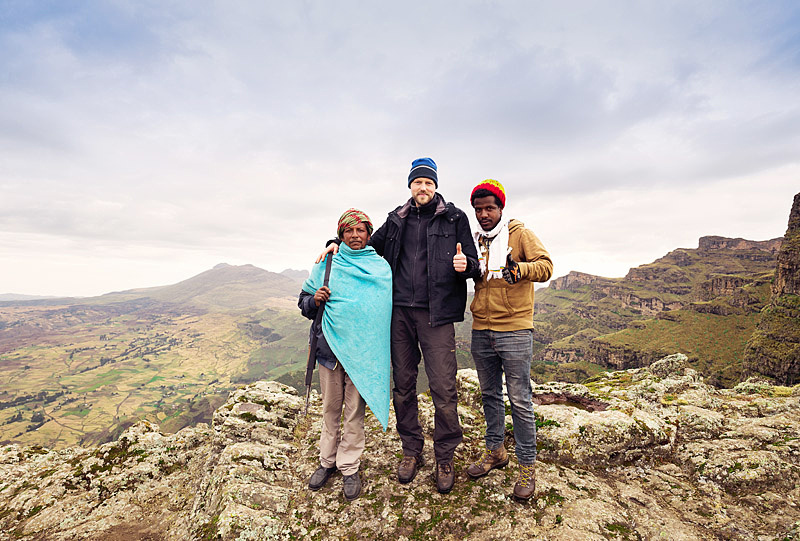 Every location in Simien mountains offers different opportunities and different styles of pictures. At Sankaber Geladas could be found about an hour walk from the campsite. A location is really good. A car is recommended; your feet will be thankful for that. Geladas at Chennek are very close to the campsite. In our experience, Channek was quite busy with locals and tourists. Buyit Ras probably is our favourite spot.  It is close to the campsite, so you do not need a car, less tourists, views are amazing. 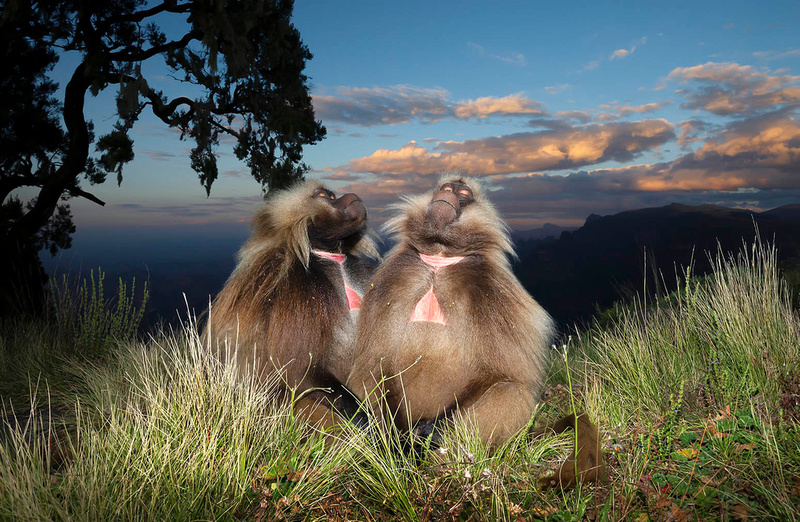 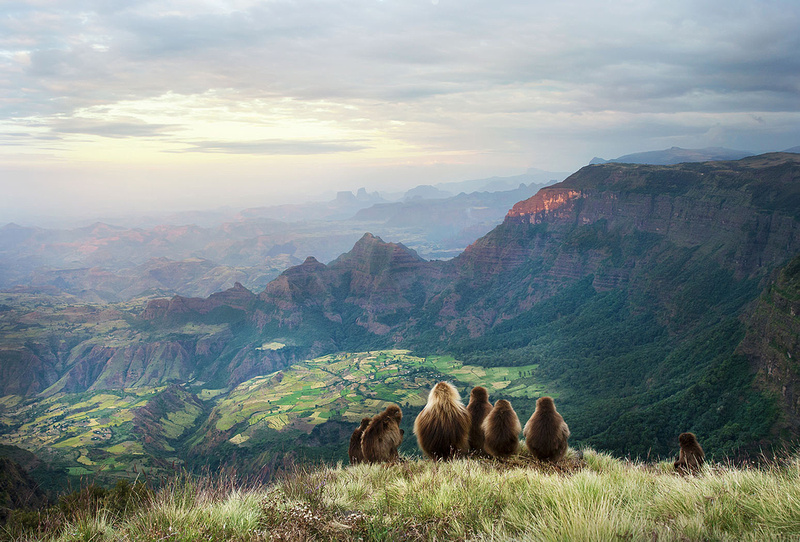 Geladas, also known as bleeding heart monkeys, on the Simien Mountains of Ethiopia, the only country where they are found.

As we stayed in Bale mountains before coming to Simien mountains, we were not too much bothered about altitude sickness. But if you just came to Ethiopia, we would recommend to start camping at Buyit Ras or Sankaber (3250 m above sea level) and not to go straight to Chennek (~ 3620 m above sea level), so your body is able to adjust and adapt to new conditions.

Overall a trip to Ethiopia was fascinating, chaotic, emotionally challenging but at the same time excited and rewarding. Getting close to truly unique animals was extraordinary and undoubtedly unforgettable experience.

Thank you for visiting and if you have any questions or queries then please drop us an e-mail.