We were very excited to come back to Iceland to photograph the Arctic Fox. In 2014 we had a great adventure in summer. Check out it here. This year we had a superb opportunity to photograph arctic foxes in winter.

Hornstrandir, as it hosts the highest density of the Arctic Fox in Iceland, was our destination and home for 6 days.

Travel info. We took a flight to Reykjavik Keflavik International airport. The transfer to the city centre takes about 45 minutes. There are several companies offering transfer service but most popular are Airport Express and Flybus. As we arrived to Reykjavik in the afternoon, we decided to stay overnight in the hotel and in the morning we took a 40 min flight from domestic airport to Isafjordur. It's possible to make both flights the same day.

Isafjordur is small town and a great place to buy something you forgot before heading to Hornstrandir - the most northerly part of of the Westfjords. In winter the boat to Hornstrandir has to be booked in advance. Borea Adventures offers great service as well as accommodation in Hornstarndir. It took us about an hour by boat to get to this isolated and unspoiled place.

Accommodation in Hornstrandir. We stayed in an old farm house which was abandoned in 1948 and renovated in 2012.

It is very basic but has almost everything you need: electricity, heating, indoor toilet and shower, even sauna. Great hot meals are  provided as well. There is no Wi-Fi and telephone signal should not be relied upon.

Equipment. We brought various lenses, ranging from 16mm to 500mm. Most of the time 300mm and 500mm were used. We don't like working with tripods but if you are a fan of them, of course bring them. By the way, there was no problem at all to bring heavy gear in the hand baggage with a domestic Icelandair flight. The important thing that it has to fit in the designated space (under the seat or in the overhead).

When we arrived, in Hornstrandir there were just few patches of snow here and there. First day we saw one arctic fox far in the mountains. Nevertheless we were not disappointed because dropping temperatures and clear skies gave as unique opportunity to witness Northern Lights. At the beginning there were couple greenish streaks in the sky but later the intensity changed and faint streaks became more prominent.

The next morning we woke up with no sign of snow... Now the good news! Even the percentage of white arctic foxes is very low in Iceland, we were very lucky to have a short encounter with this beautiful animal. 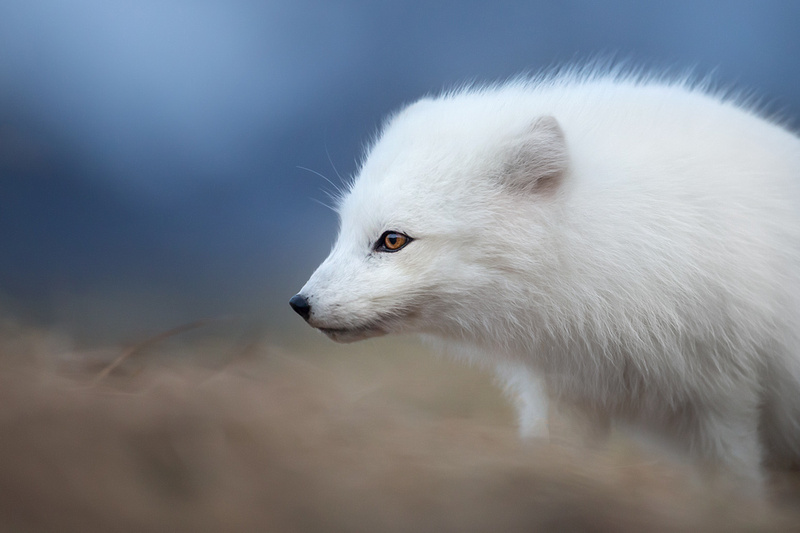 Early afternoon, we decided to explore the area and headed towards the waterfall. On the way back we spotted a blue morph arctic fox. 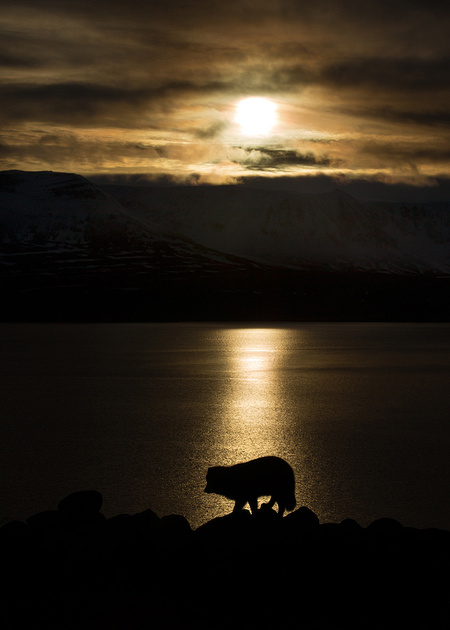 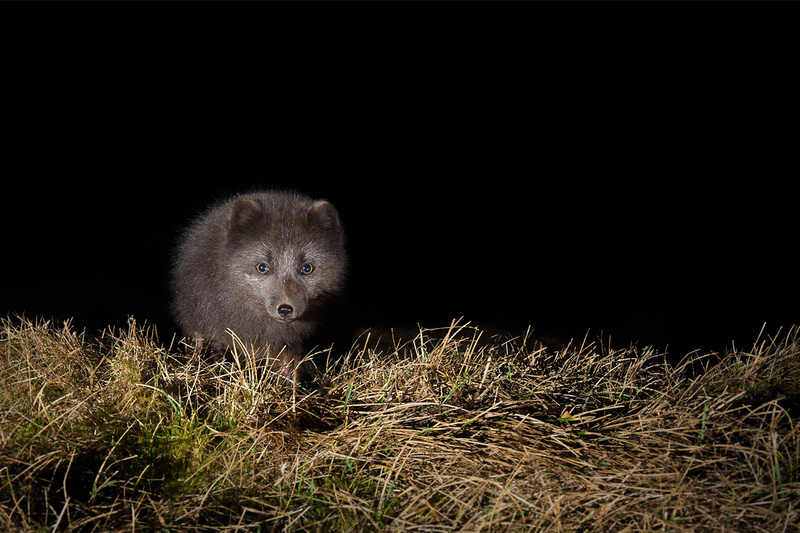 Iceland is one of the very few places in the world where it is possible to see and photograph the Blue Morph Arctic Fox.

The following morning we hopped off the beds and poked heads out the window. The mountains were covered in snow. It turned out to be one of the best days. That day we've spotted foxes early afternoon and the falling snow was a huge help in delivering more appealing winter images. 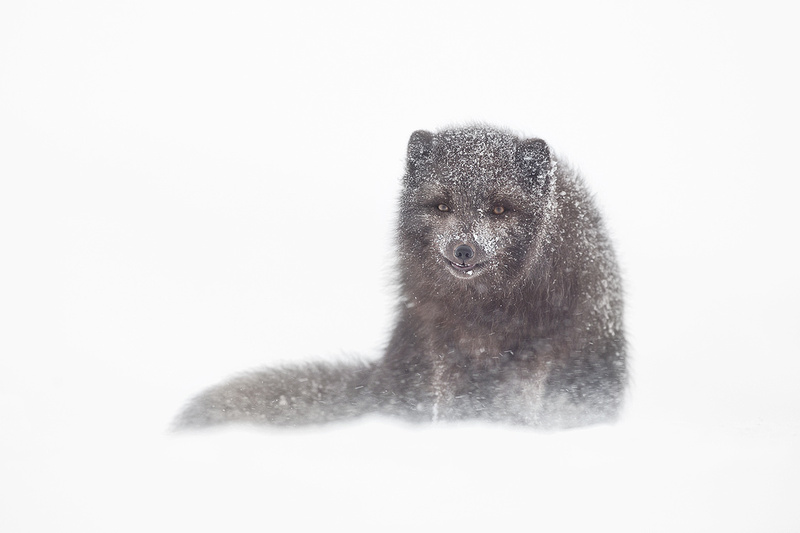 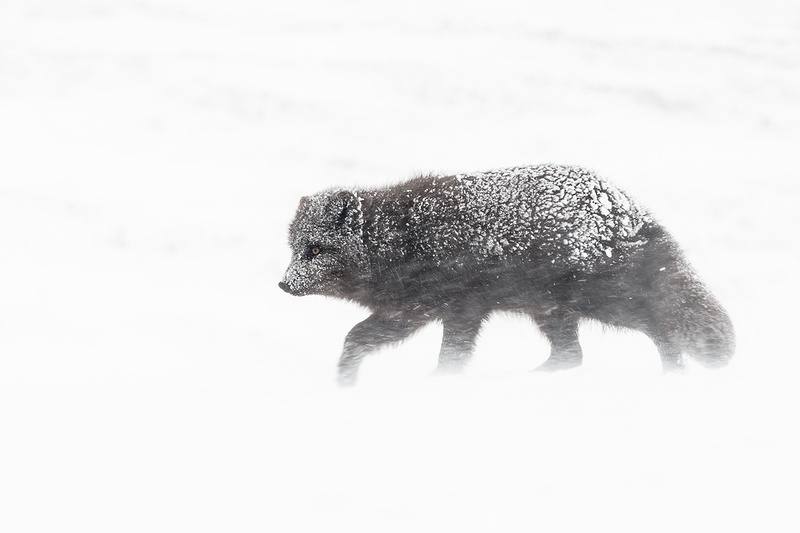 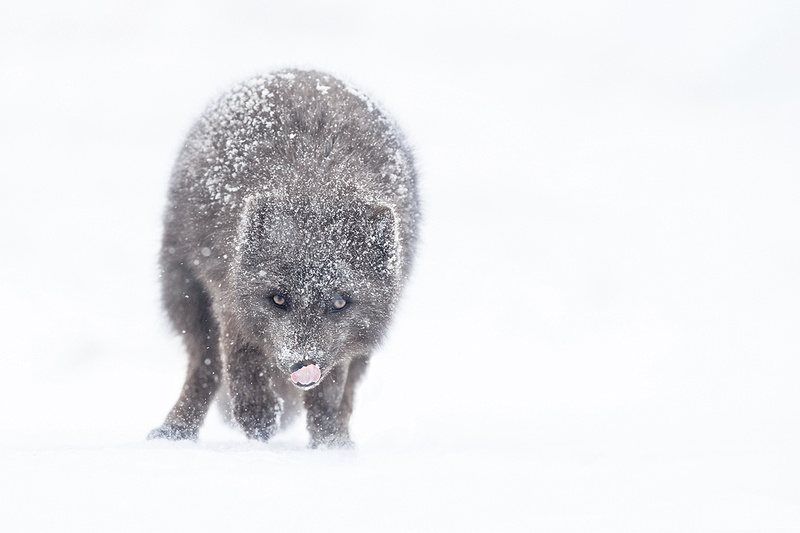 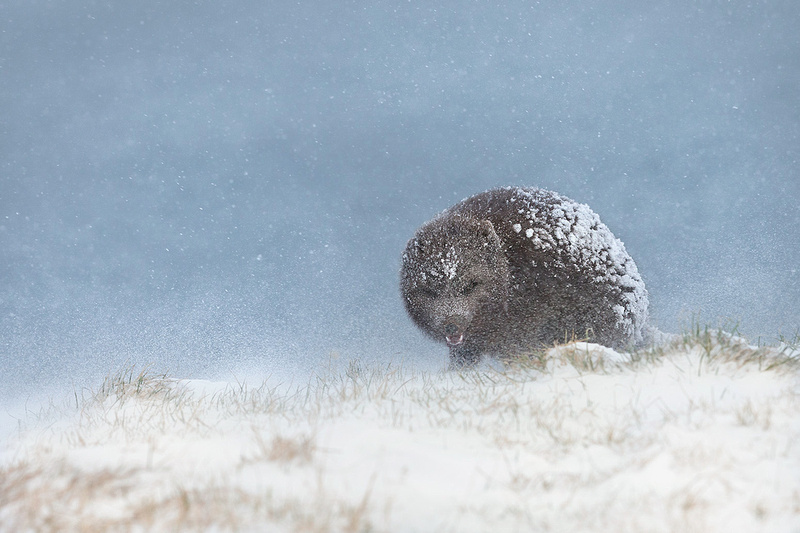 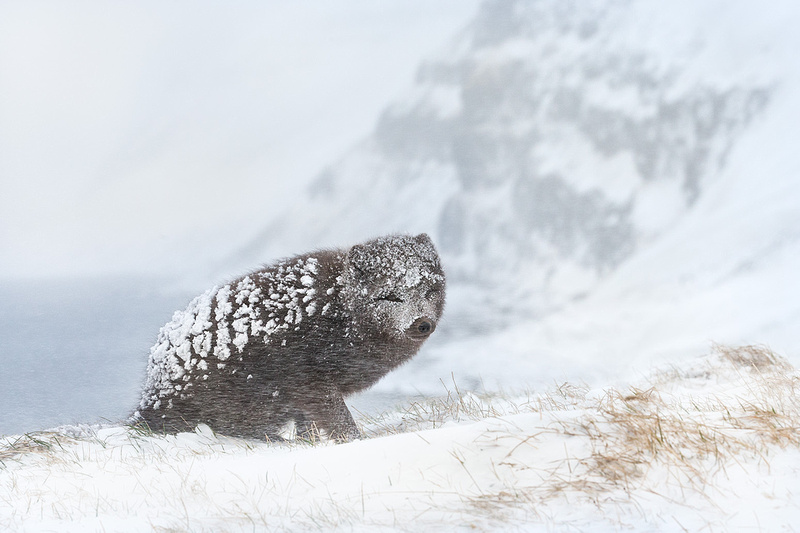 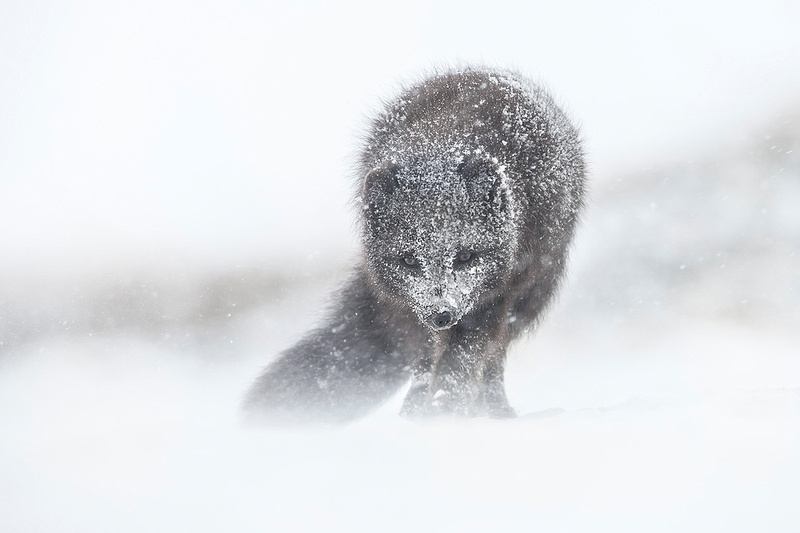 Later that day we spotted a fox which could definitely be called as a snow fox as it just woke up after the blizzard and was covered in a layer of snow. By the way, the first picture shown below won the 1st place in the International Gold Turtle competition. 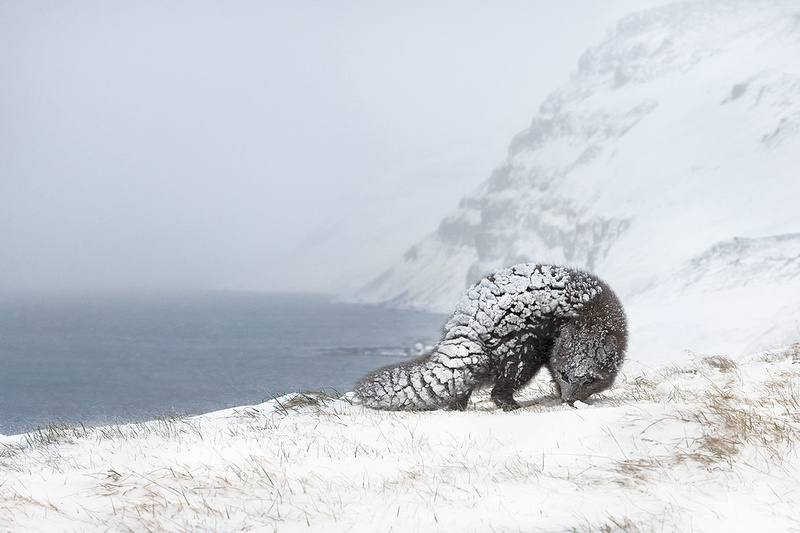 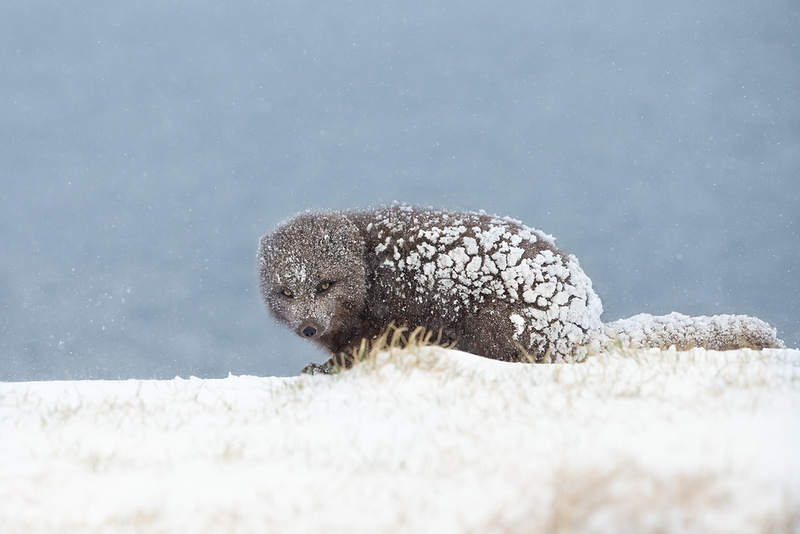 Arctic foxes are particularly tough and hardy animals. Surprisingly, a healthy Arctic fox can be without food for several weeks and can cope with temperatures below -40°C without increasing its metabolism to stay warm.

The following day we awoke to a bit more snow, temperature stayed around -5 C degrees. 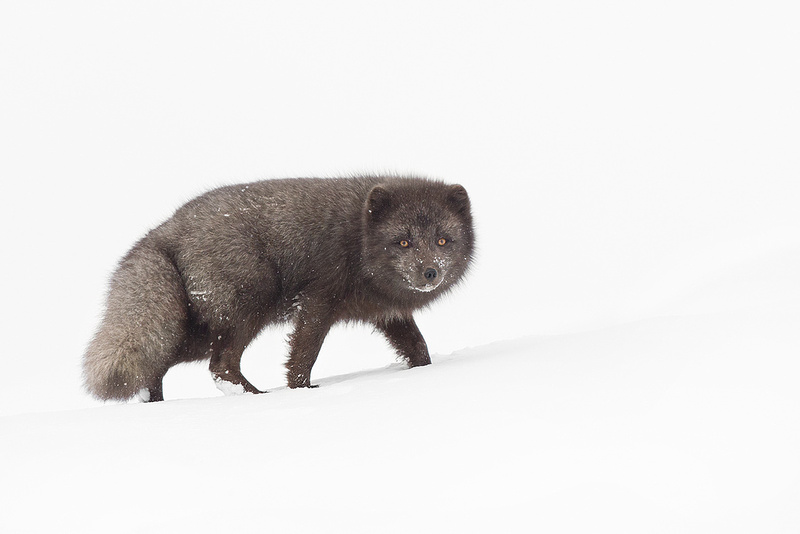 For a better idea of where images were taken and where the foxes live, we used wide lenses.  Arctic Foxes are by their nature very curious animals and on many occasions approached within just a few feet from us. 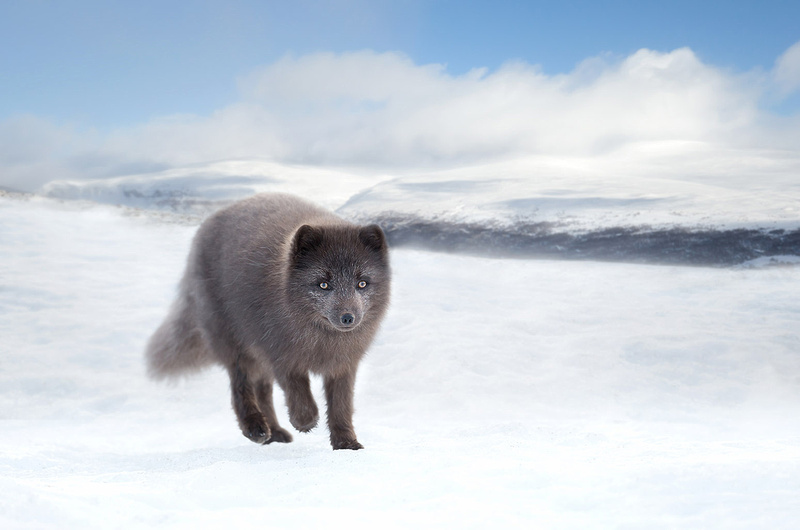 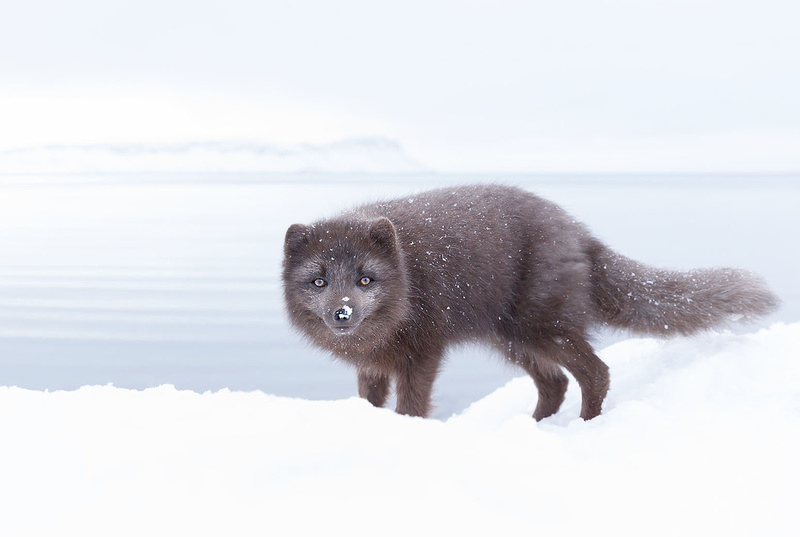 Close up of an Arctic fox standing in the snow, winter in Iceland. 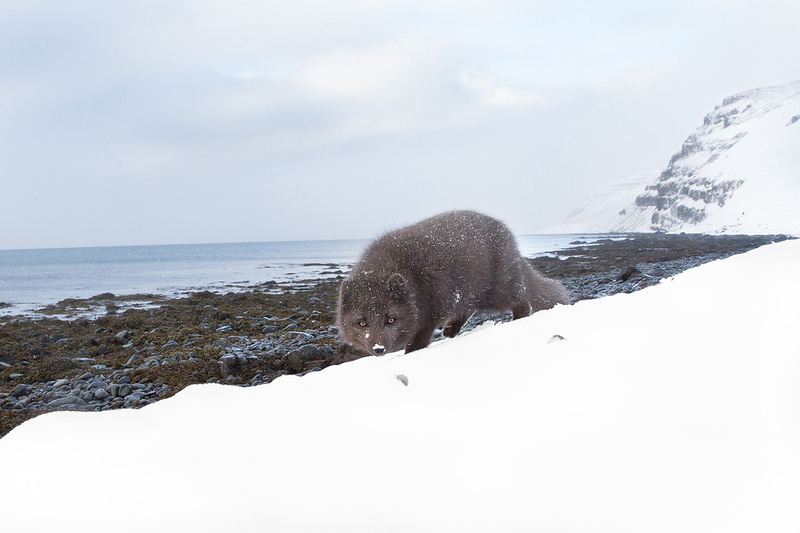 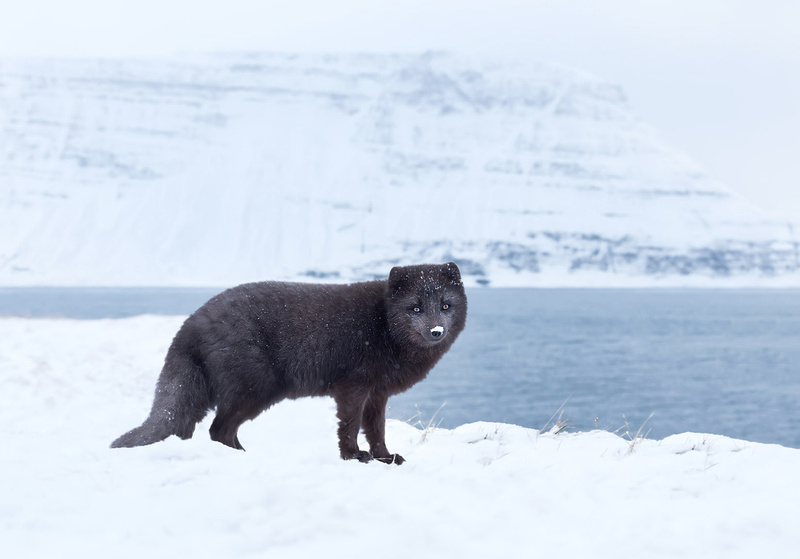 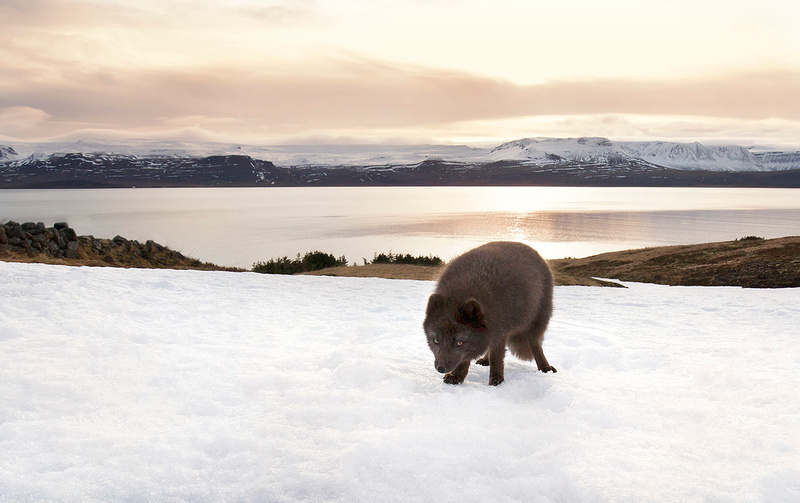 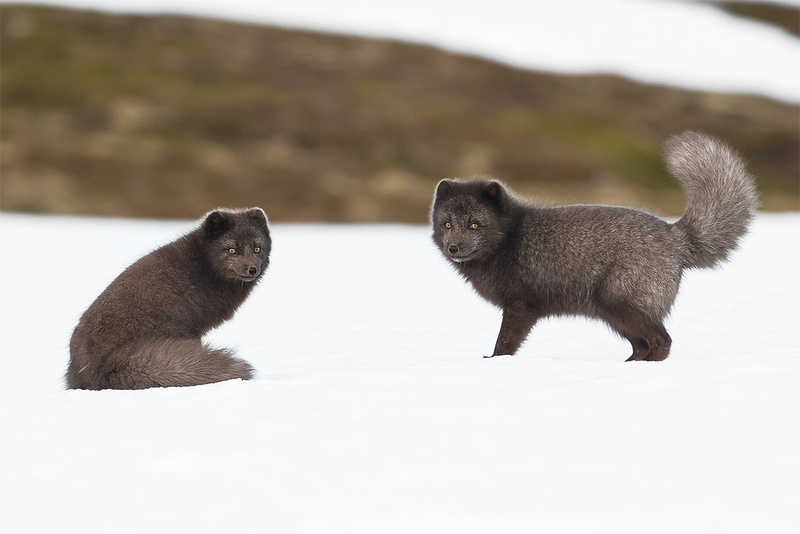 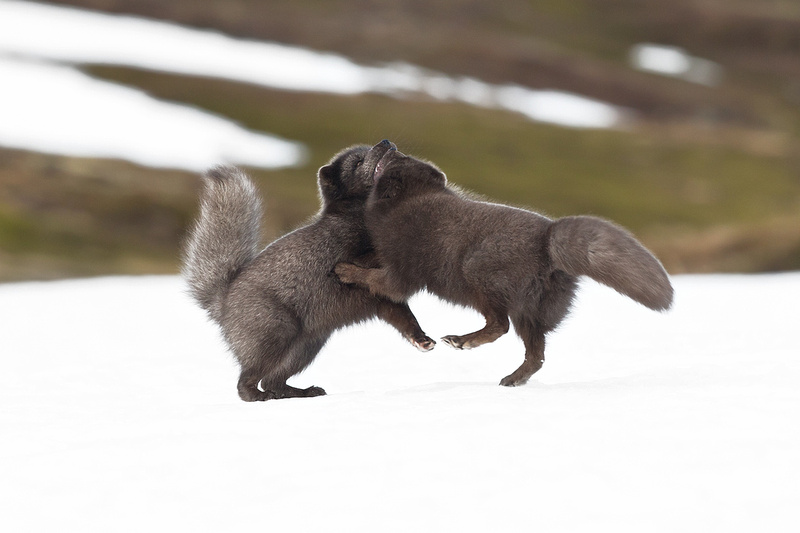 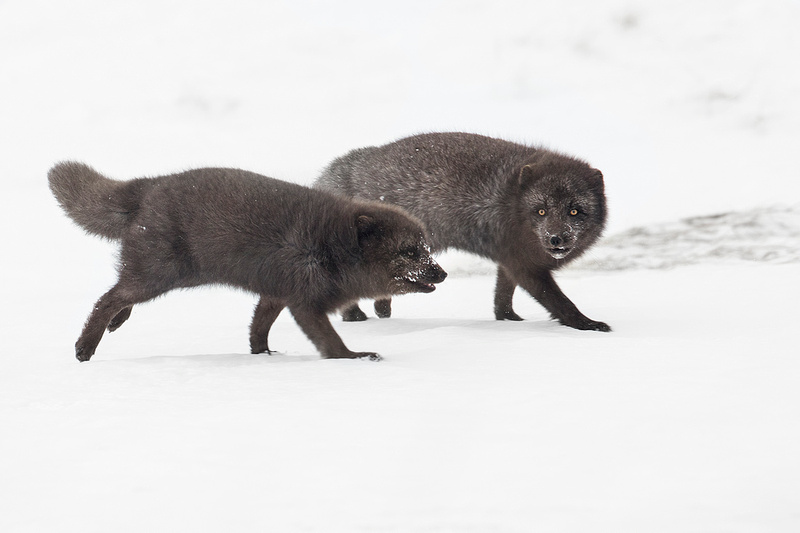 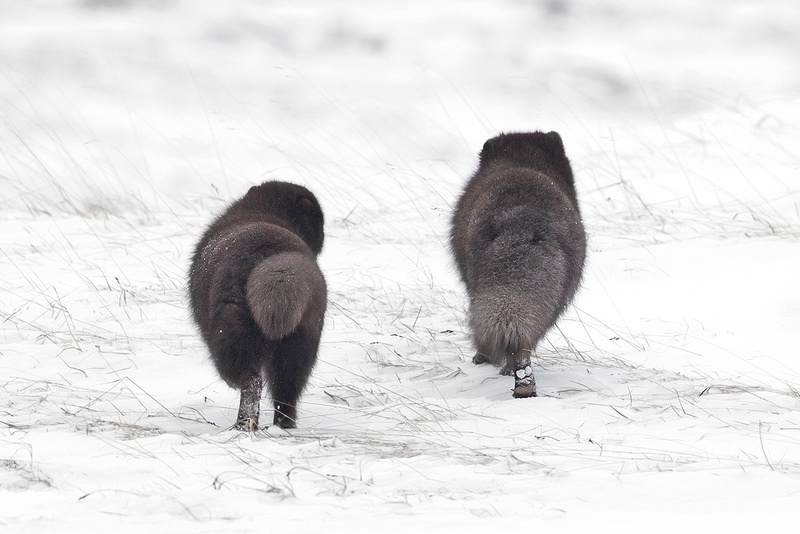 On the 5th day we stayed on the coastal area. We've noticed earlier that foxes used to scour the shore during low tides looking for shellfish, sea urchins and other shore animals or seabirds. 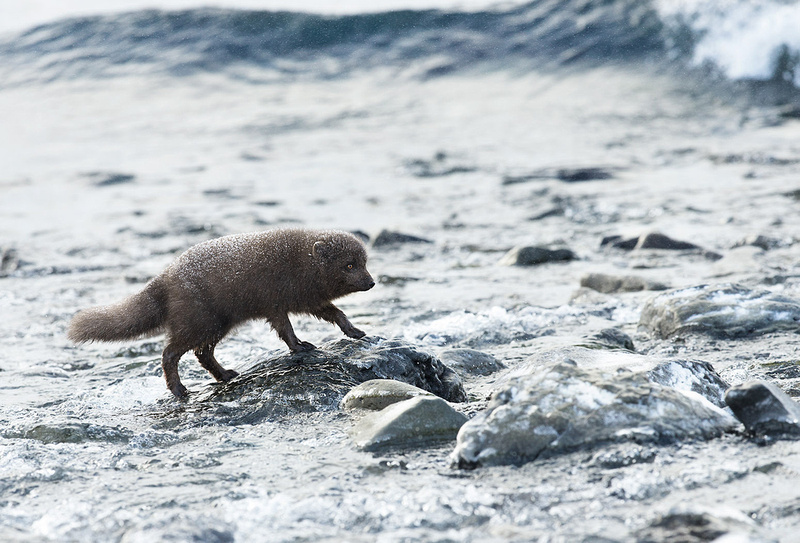 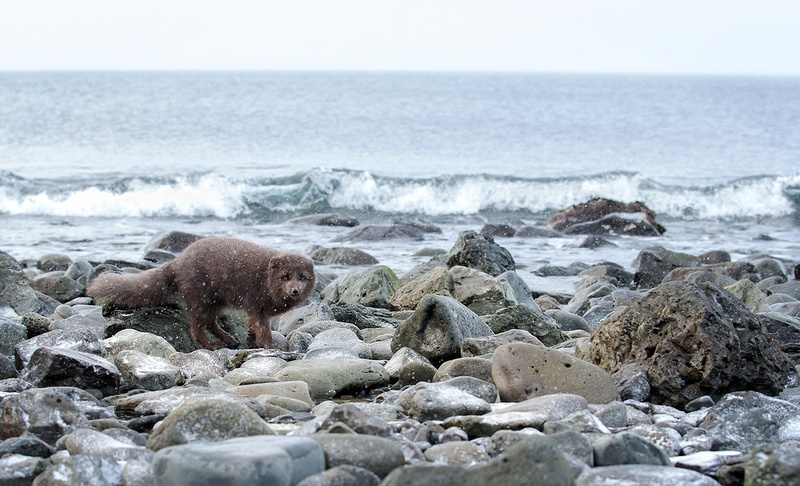 We were surprised to find out, that Arctic foxes are proficient swimmers able to swim more than 45 min and for distances more than 2 km.

On our final day we quickly packed the bags and stayed with cute arctic foxes for the rest of the time. 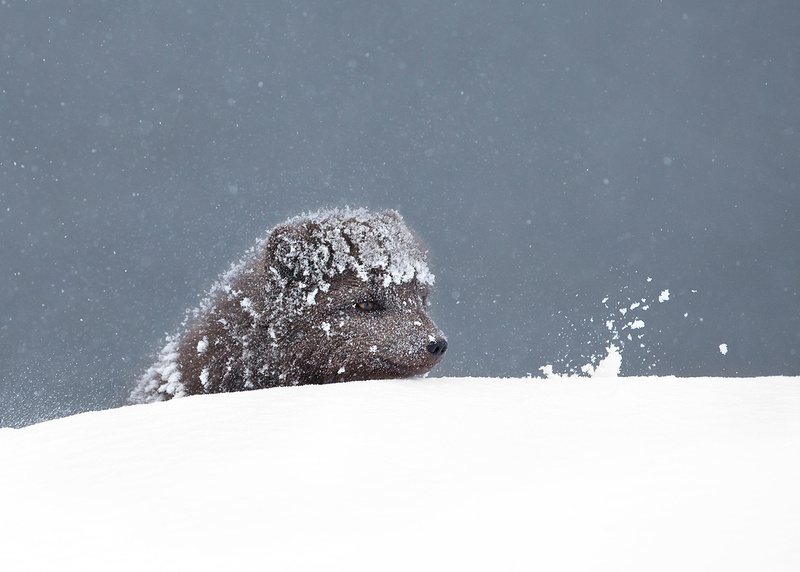 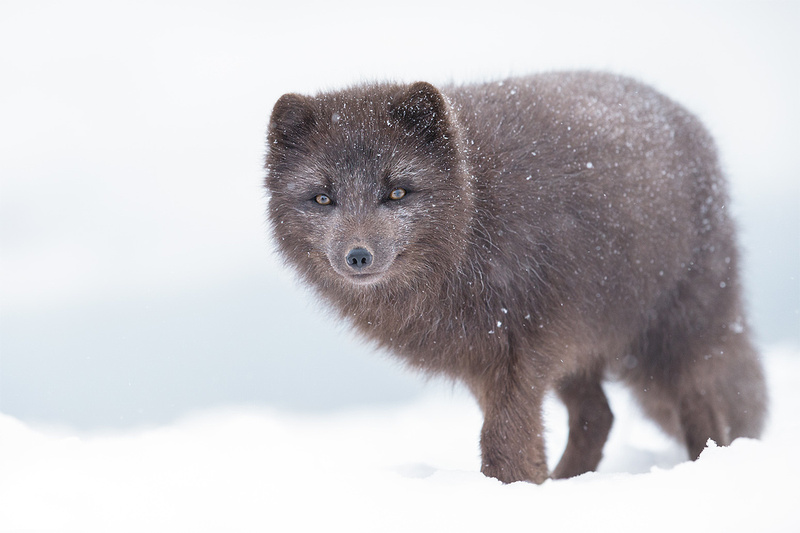 We are really happy and delighted to have had the opportunity to visit such an isolated and unspoiled place. Heart-warming sight of an Arctic fox on the shore looking at the boat while we were leaving Hornstrandir is one of the most memorable encounters which we brought back home with us.