We just came back from an unforgettable trip to Norway. The idea to photograph Musk Ox in winter came spontaneously and quite unexpectedly. We’ve done quite a lot of preparation for a trip to Japan but with the things not going as planned, we decided to fly to Norway.

We wanted to photograph muskoxen in Europe instead of traveling to Greenland or Canada where the biggest population of this amazing animal could be found. Dovrefjell national park in Norway has the largest wild musk oxen population in Europe which is around 300 animals. Oppdal and Dombas are one of the best locations to photograph this extraordinary animal. They date back thousands of years to the Ice Age where musk oxen lived together with mammoths and have changed little since then. 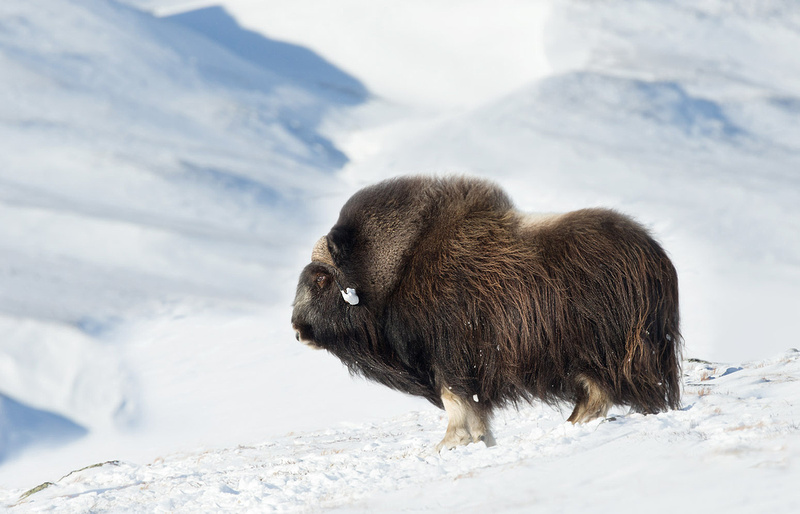 The musk ox is a grazing animal, more closely related to sheep and goats than to oxen. They became extinct across much of their range in Europe and Alaska, as a result of overhunting and climate change. Current worldwide population is about 130,000 animals.
The first Musk Ox males we’ve spotted early afternoon. In winter muskoxen conserve heat and energy, so they spend much of their time resting and sleeping. For us it meant lots of waiting in the cold for any action to happen. 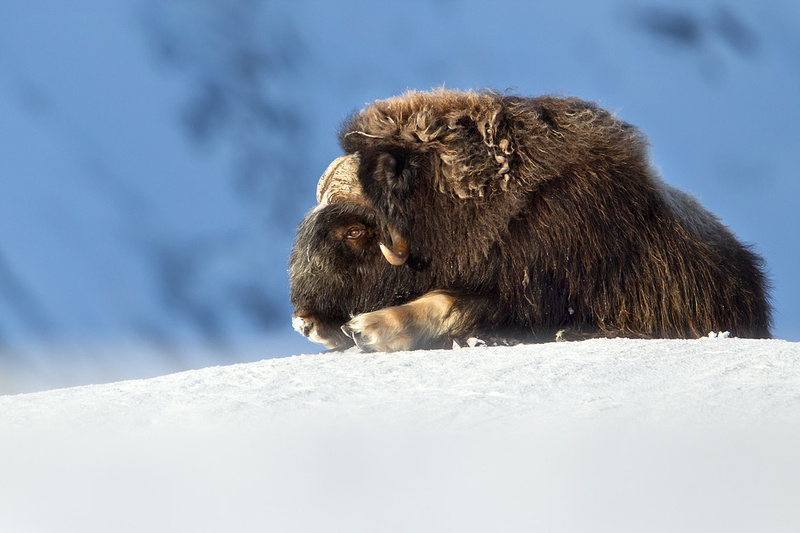 In winter, muskoxen prefer to stay high in mountains where winds blow the snow away from dried grass, sedges, and willows. This poor vegetation is the main food source for the animals during the time of cold. Their front hooves are larger than hind hooves, making it easier for the musk ox to dig through snow for food. During summer months muskoxen typically stay in areas near water. 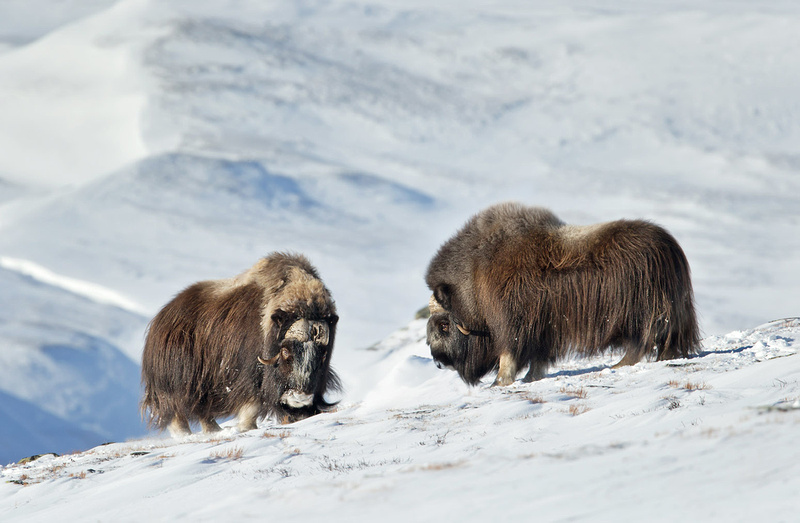 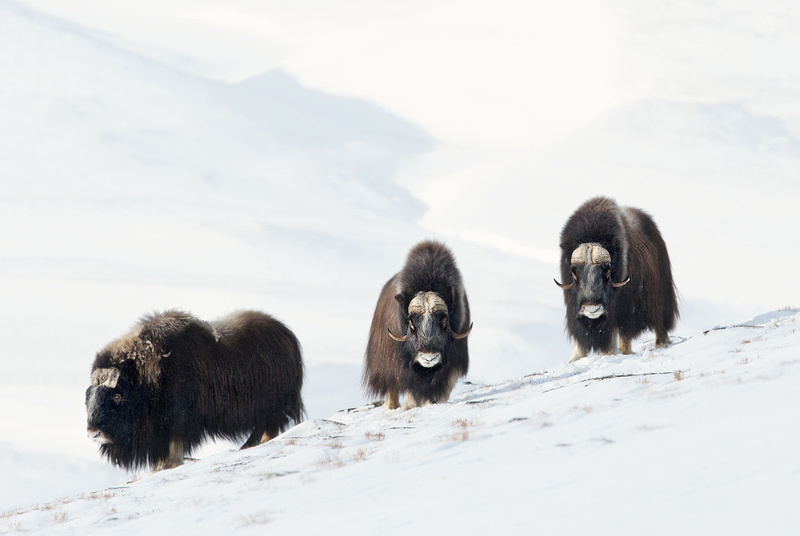 In the evening we headed down the hill to prepare our tents for the night.  A sky full of stars, nice company with our brilliant guide Sigbjørn and warm food will stay in our memories from this freezing night. 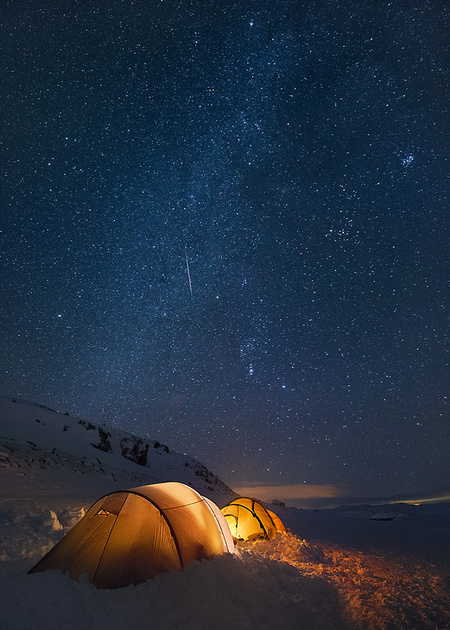 Before the sunrise we headed back in a search of musk oxen. 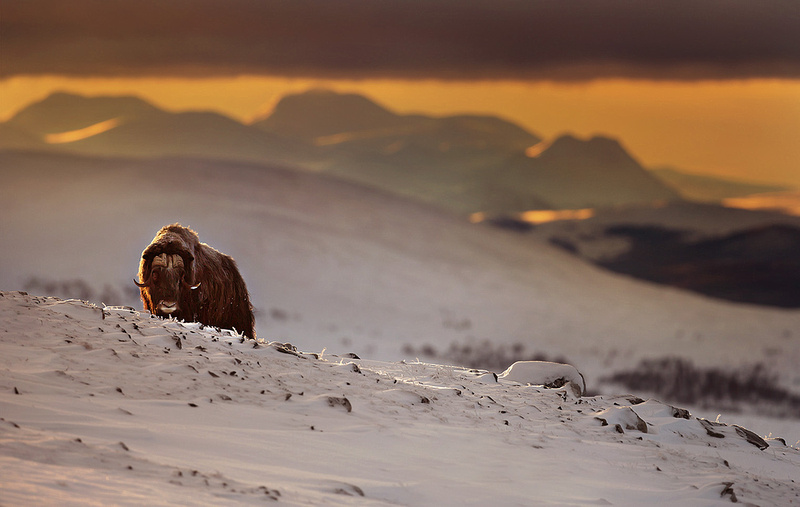 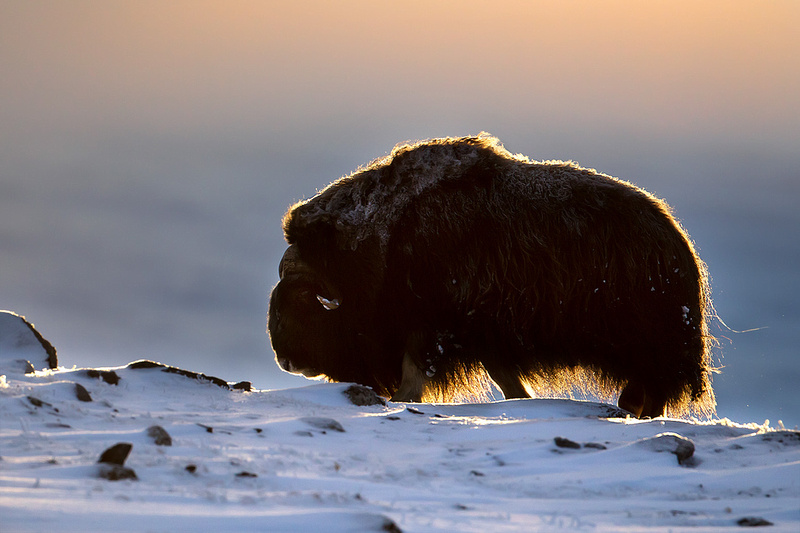 Couple hours later, we  headed to another location. The wind was picking up and climbing the mountain in blizzard turned out to be quite demanding. Musk oxen don’t mind the cold; their wool is ten times warmer than sheep’s; it is the softest and most expensive wool on earth.

Strong wind was picking. It was a very cold windy day - one of the toughest we've experienced photographing wildlife.  We were climbing the mountain in a thick blizzard with a very poor visibility and wind blowing ice and snow into the eyes. 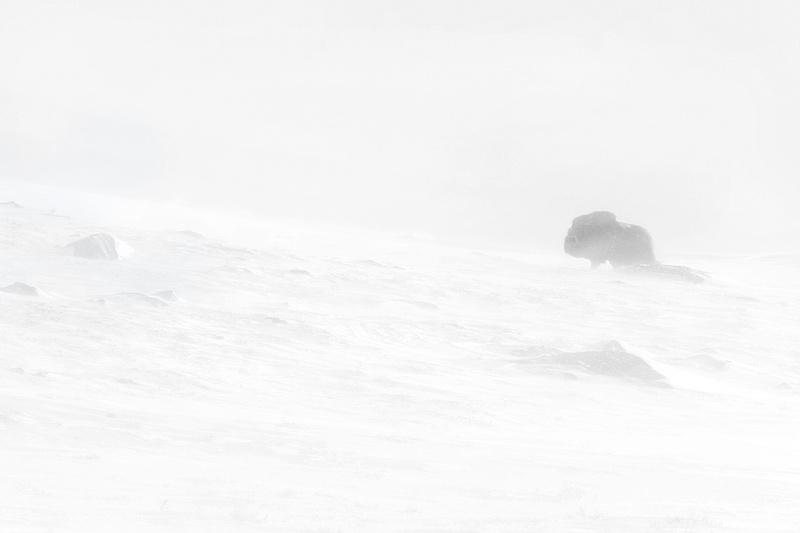 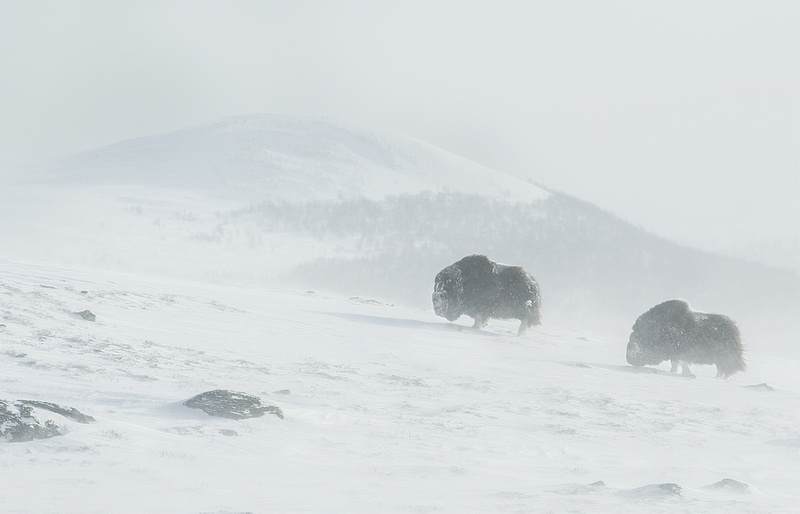 We had very little expectation to see musk oxen. But luckily, we found them and spent couple of hours photographing which in blizzard and cold was quite a challenge. 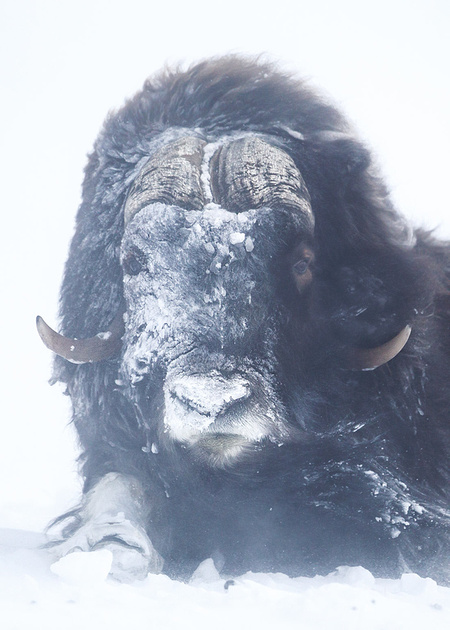 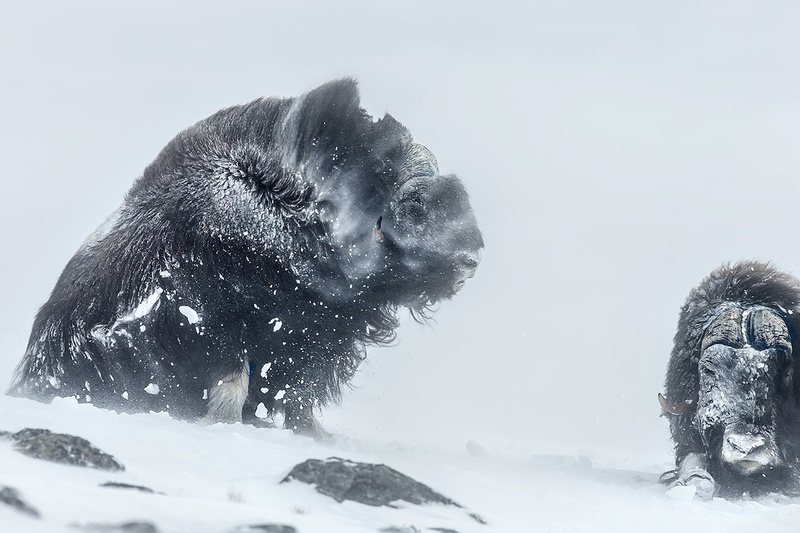 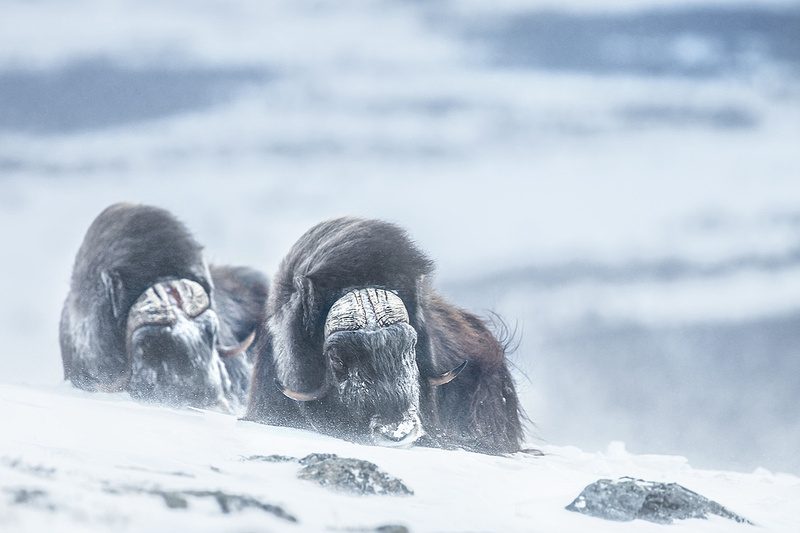 The following day we headed to photograph Musk Ox using sledges with huskies as transportation. Dog sledding ride with super enthusiastic Alaskan huskies was filled with adrenaline from start to finish. First off all we had to take huskies from the lorry and harness the dogs ourselves; one of our sledges had 5, another – 6 dogs. After a short instruction how to use breaks, we didn’t have much time to think as huskies were energetically moving, howling and jumping around as they couldn’t wait to pull the sledges. Seconds later off we went down the steep hill at the full speed and of course ended up flying out of the sledges in a soft deep snow. At that moment there was only one thought in our heads – run as fast as you can and catch the dogs. Later, of course, we didn’t forget to use the breaks on steep hills and sharp turns. 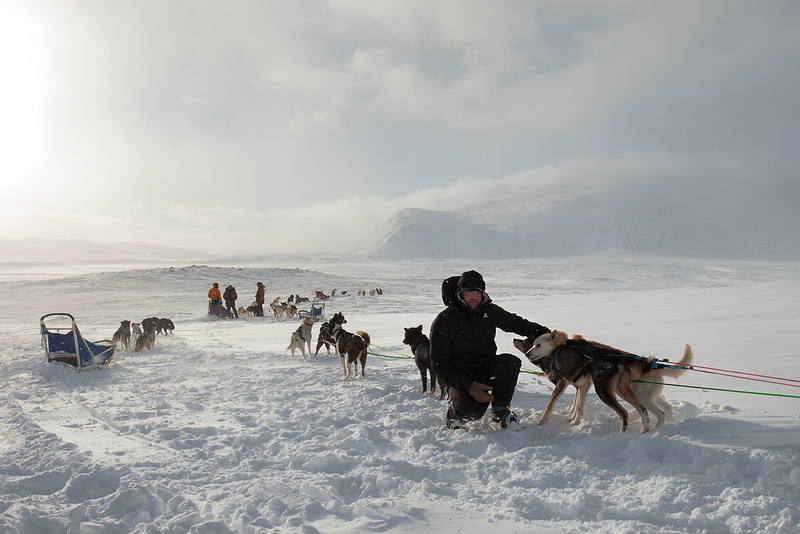 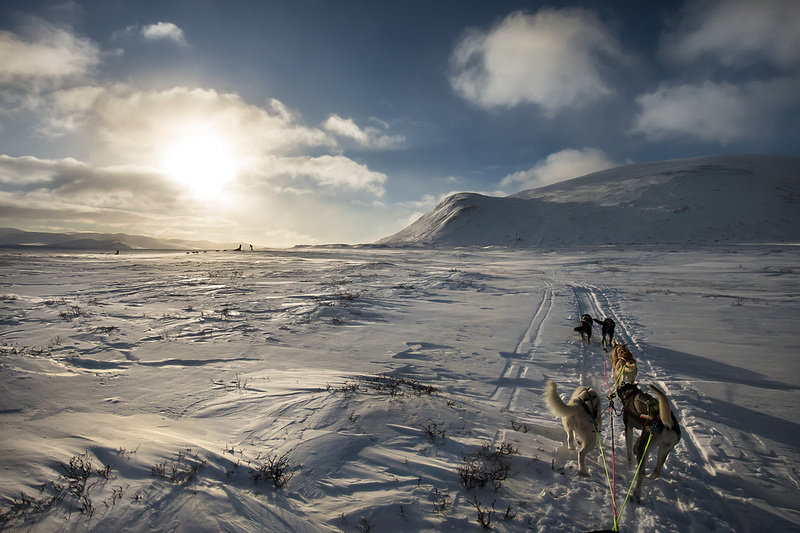 That day the weather was changeable; within minutes the sunshine used to turn to such heavy snowstorms that each other’s location we knew only from the howling of huskies. Luckily the wind calmed down and we’ve managed to spot Musk Oxen. 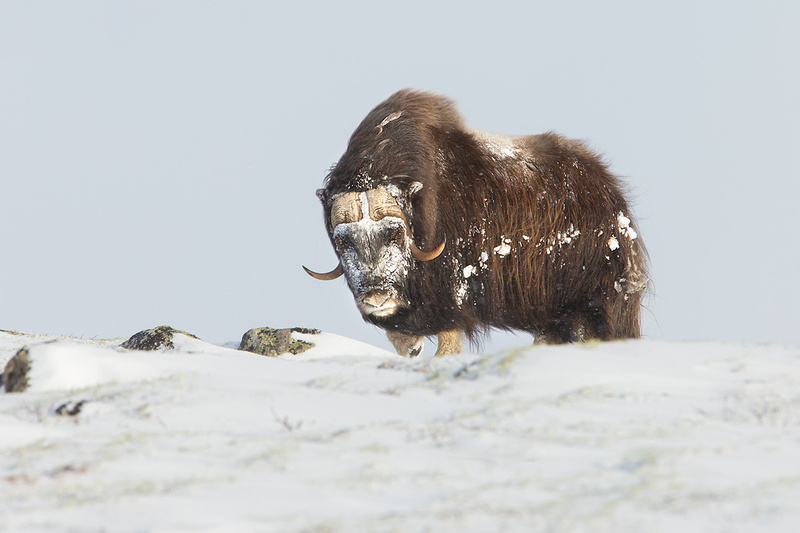 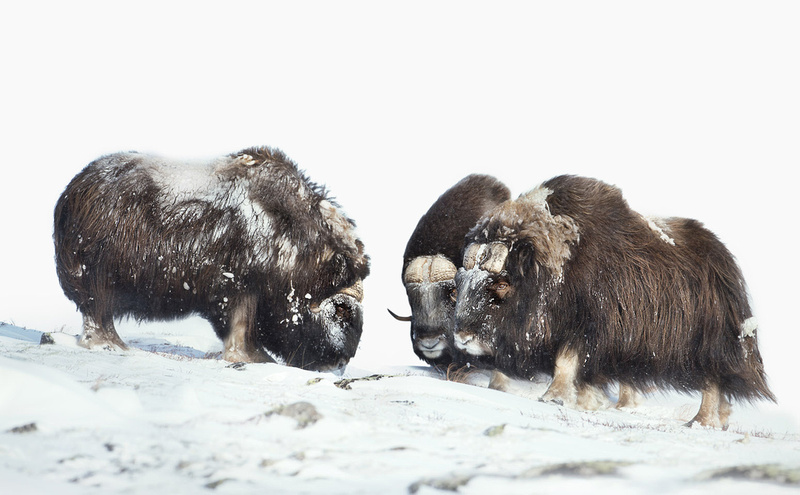 This virus  causes skin lesions which are painful and often occur on the lips, muzzle and nostrils, sometimes even extent on eyelids, chest.  The skin lesions develop into scabs which bleed easily. Generally animals recover but in severe cases they might die from starvation. This is more common among young animals.

After successful time in Oppdal, for couple of days we headed to a small town of Dombas where we spotted musk ox females with calves. 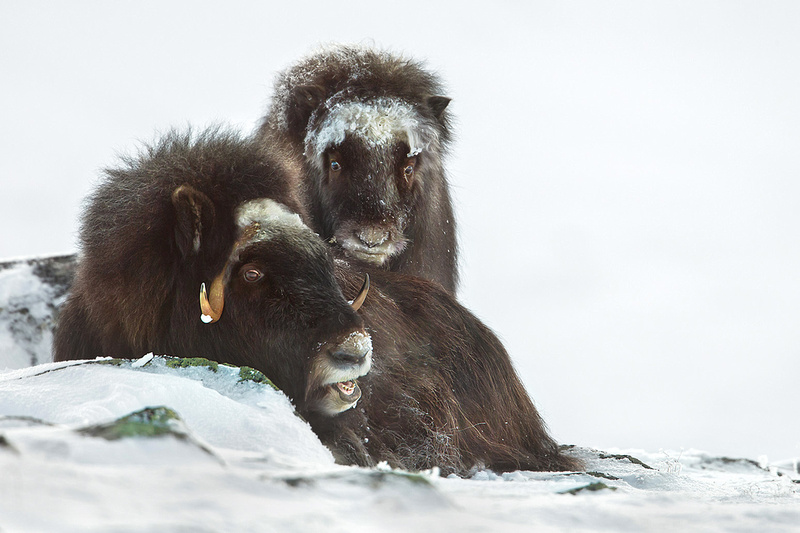 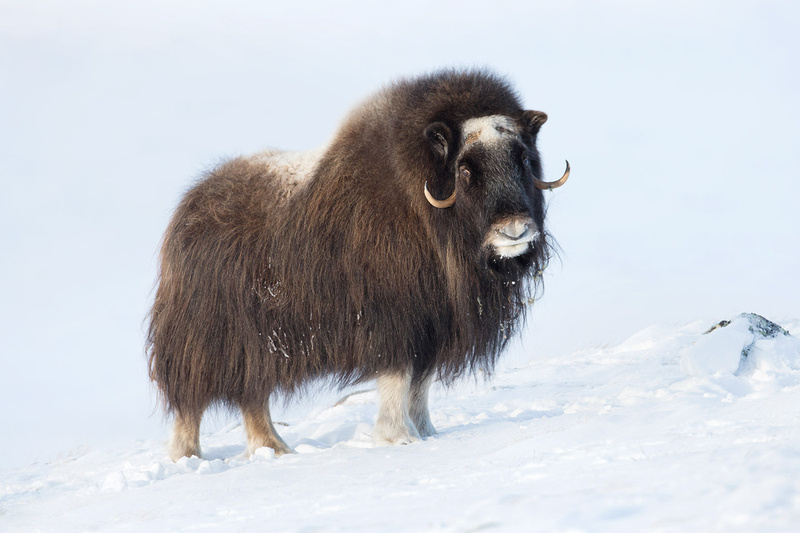 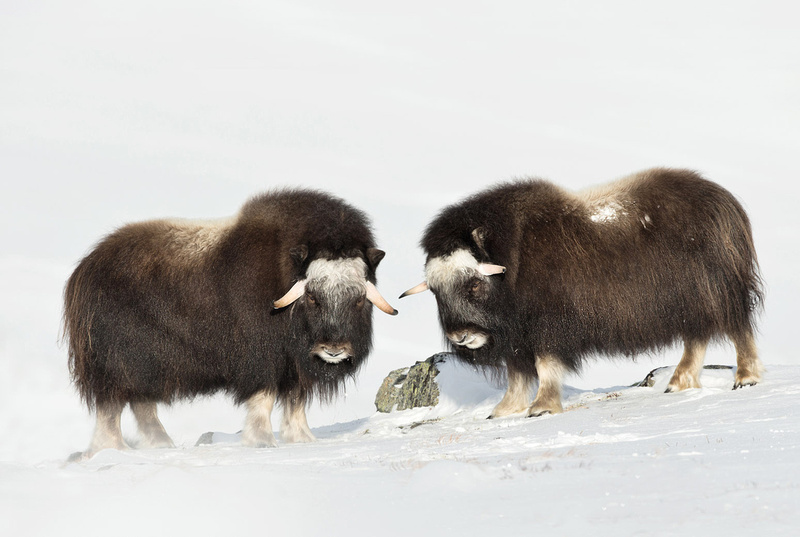 For our last day we headed back to Oppdal where  we were very lucky to come across three different sightings of Musk oxen. We’ve decided to stay with a group of males chasing and challenging each other. 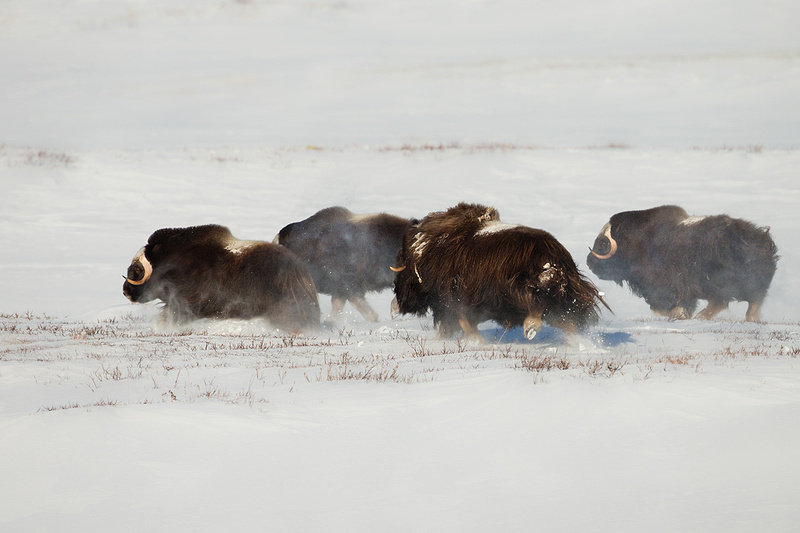 Muskoxen is a herd animal, and not difficult to approach. In general, they are not aggressive towards human but if threatened or approached unexpectedly they can attack. Musk ox may run at the speed of 60 km/h. 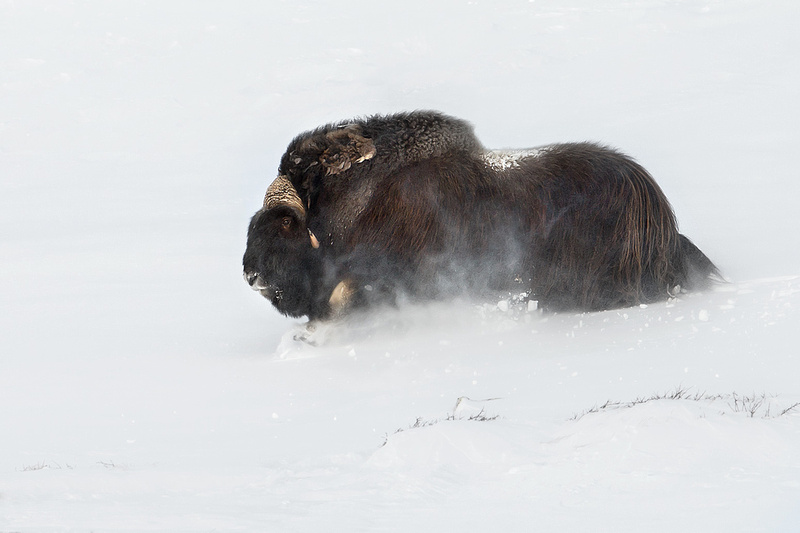 While photographing muskoxen it is important to keep a distance and approach animals slowly, without hiding. It is important that musk ox notices you well in advance and acknowledge your presence.

All six days were a great success with different light, different setting and different weather conditions. We are extremely glad with each and every day we have spent photographic this ancient, powerful, arctic mammal. Dovrefjell National Park is a perfect place for those who love adventure, solitude and mountains.