We recently returned from the Falkland Islands. It is a fascinating place and definitely worth visiting if you are a nature lover. There are five penguin species breeding on the islands. This blog is about King penguins. 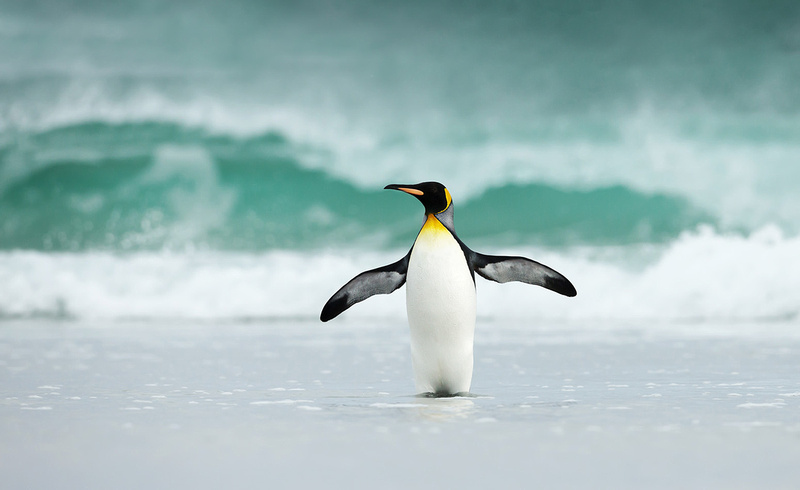 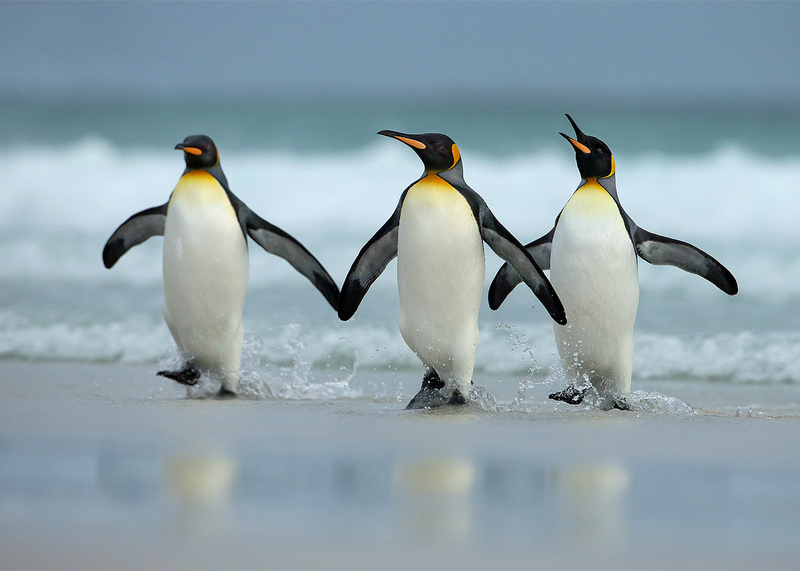 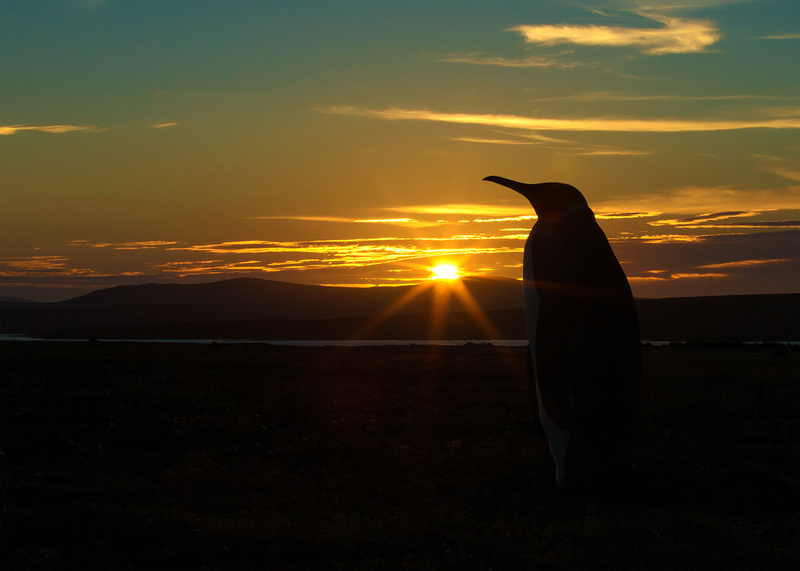 Volunteer point is a home to the largest King penguin colony within the Falkland Islands with 1000 breeding birds. 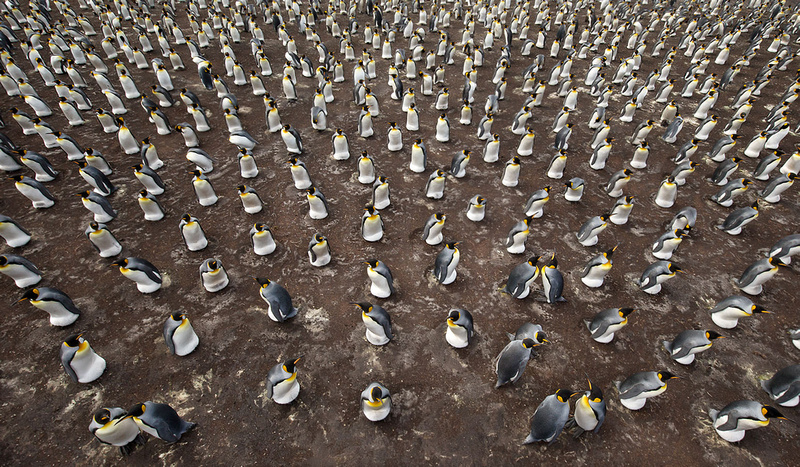 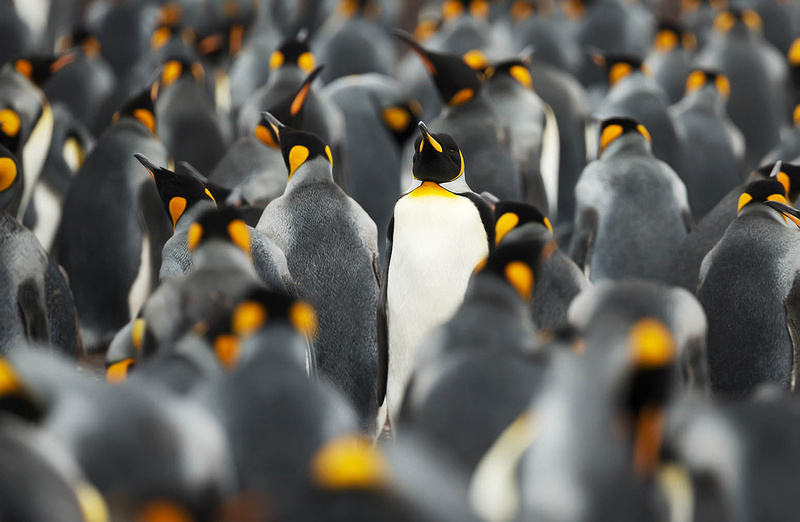 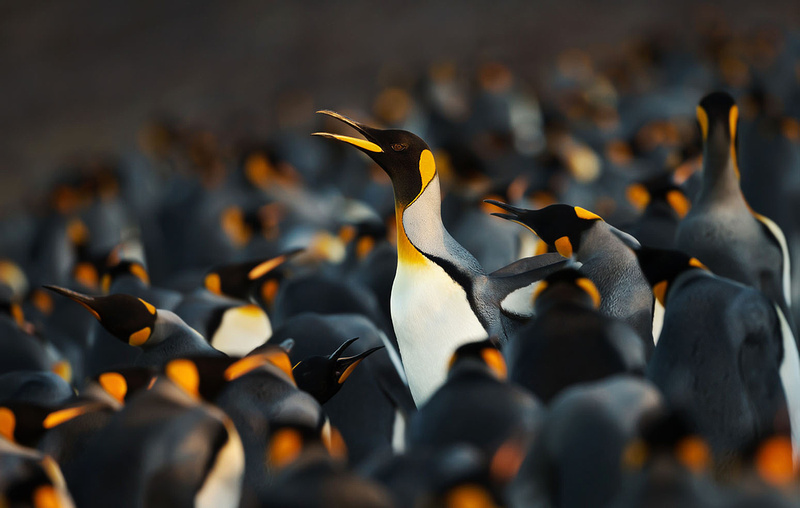 When people think of penguins, typically they have the Emperor in their minds. King penguin is very similar to the Emperor, only it's a little bit smaller, has slightly different colour pattern, lives on the sub-Antarctic islands and has brown not grey chicks. 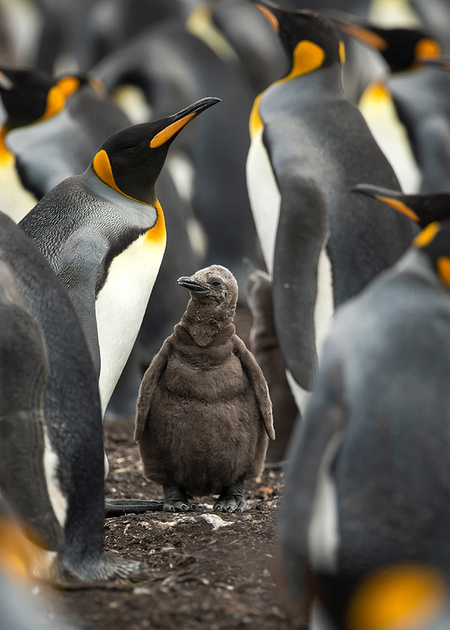 As we visited Volunteer point in late January it was an incubation and brooding period for penguins. Some were sitting on the eggs, others already had small chicks. 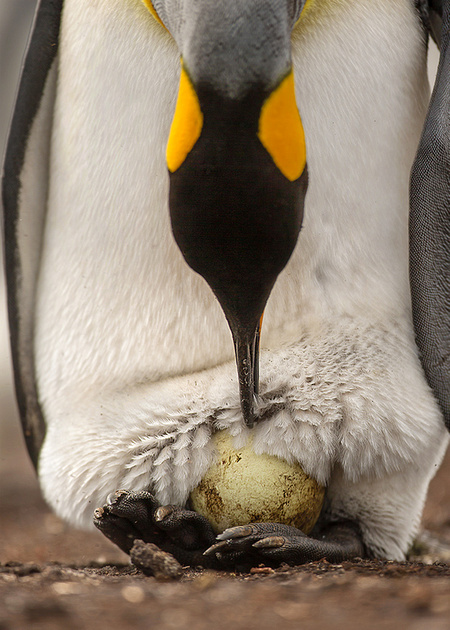 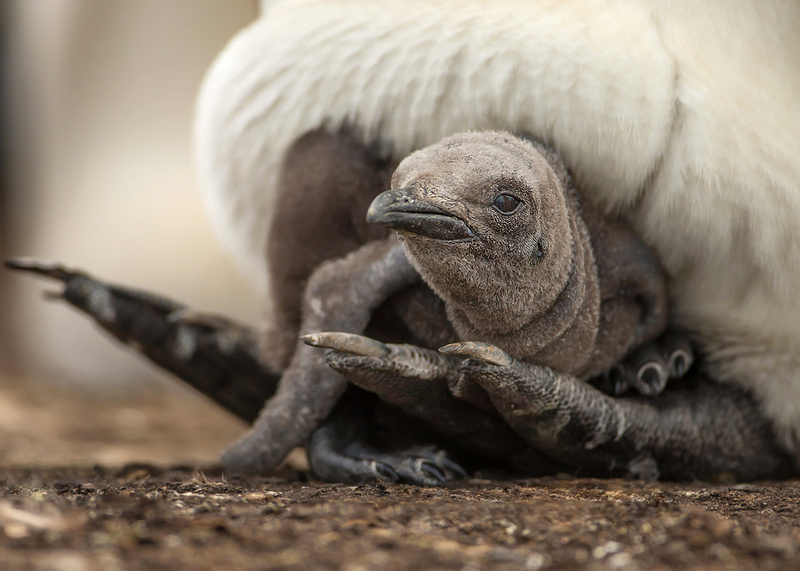 Unfortunately, some eggs were left unattended. 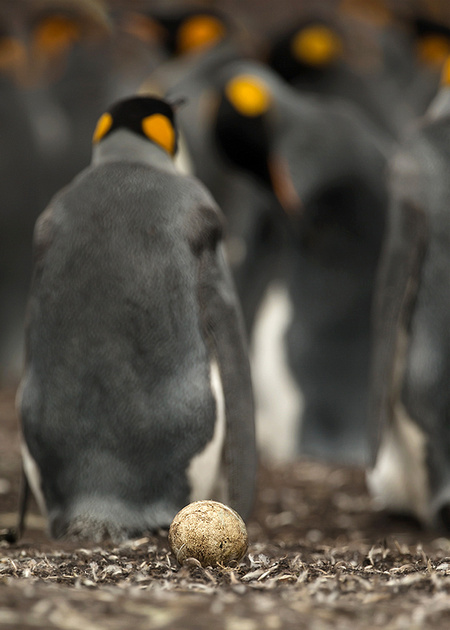 Newly-hatched young are very vulnerable and entirely depend on their parents for food, warmth and comfort. 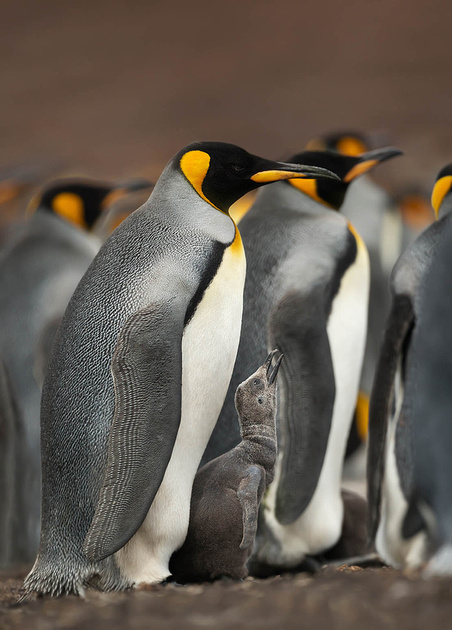 Close up of a King penguin chick asking for food, Falkland Islands. 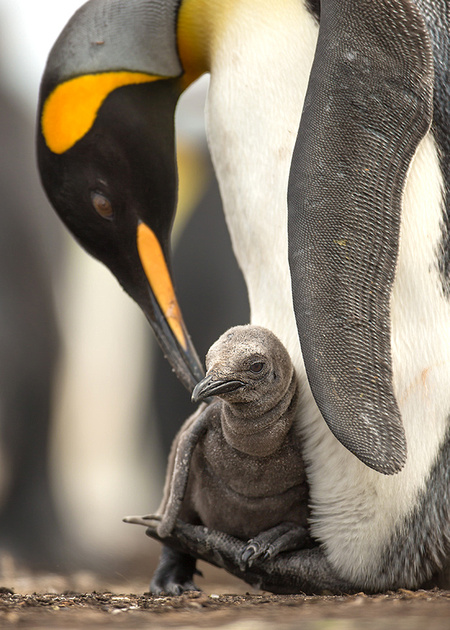 Chicks are fed by partly digested food, regurgitated by their parents. 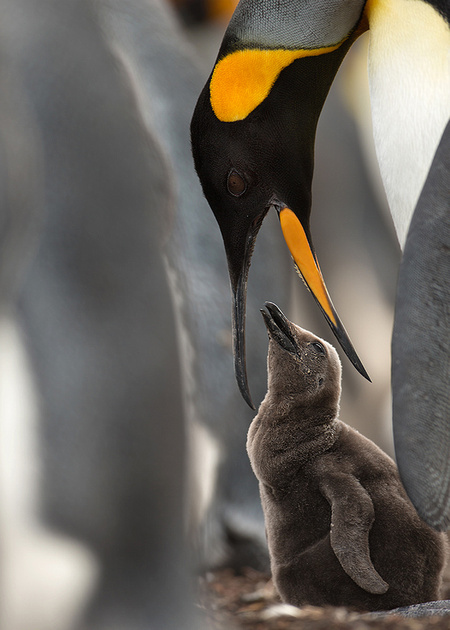 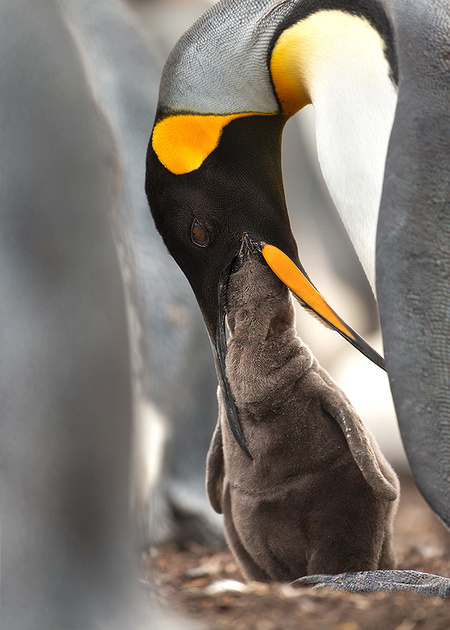 King penguins are aggressive towards other chicks, so parents keep a close eye on neighbours. In fact, breeding Kings spend up to fifth of their time fighting trying to protect their chicks and defend their half-metre square territories. 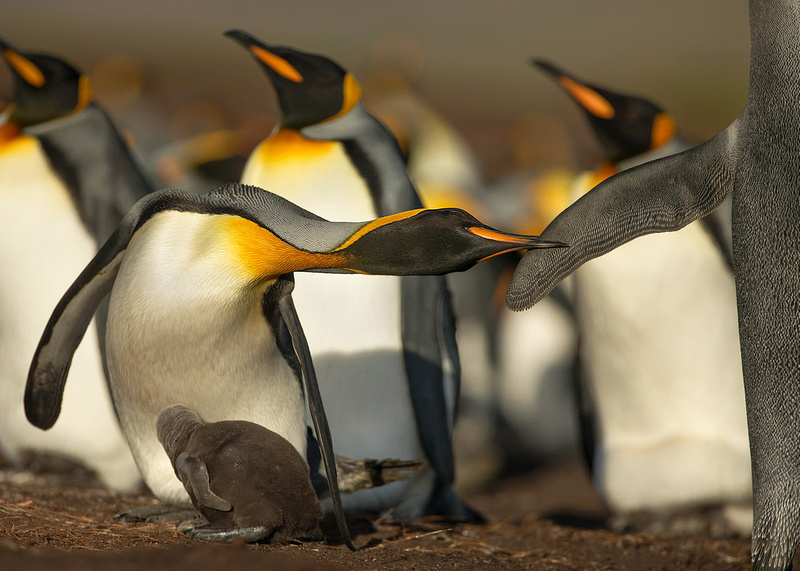 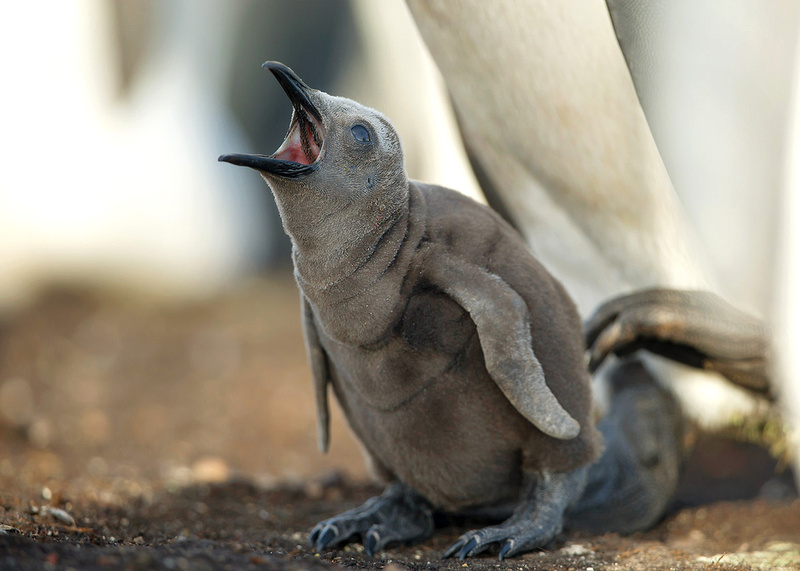 Even outside colonies King penguins try to get things sorted out in quite an aggressive way. 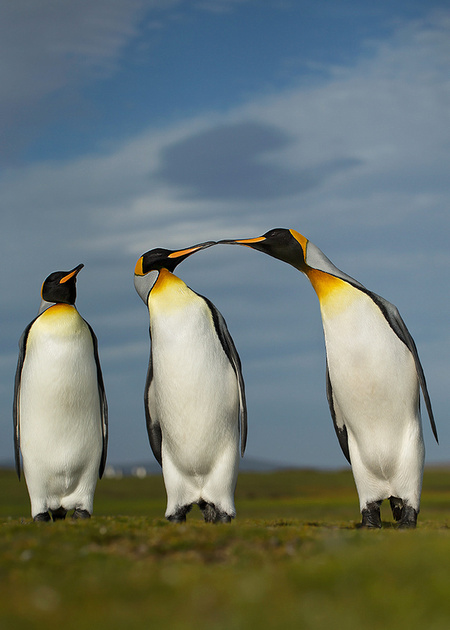 Around June King penguin chicks have thick brown down, they become more independent although still rely on parents for food. At this age they still are very different in appearance to the adults. Actually early explorers described them as different species, the "woolly penguin".

While both parents go off to the sea, young penguins stay in larger groups and wait for food. Chicks will often be left for three month without a meal. This continues until the summer of their second year. So roughly it takes 14-16 month for penguin chicks to be ready to go to sea.

During our visit in January we've spotted couple molting King penguin juveniles. They looked a bit ridiculous at the last stages of molting. 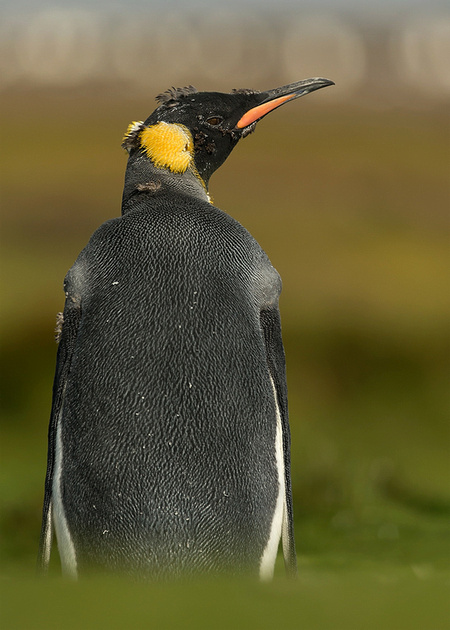 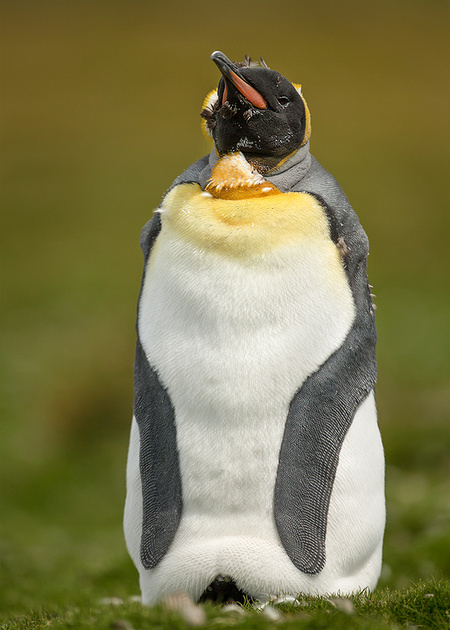 One of the youngsters looked very similar to adults but clearly didn't get rid of excess weight.

There is a comparison of young and adult King penguin. Juvenile king penguins are similar to adults, but their coloration isn't as vivid. They do not reach full adult coloration until three years of age. 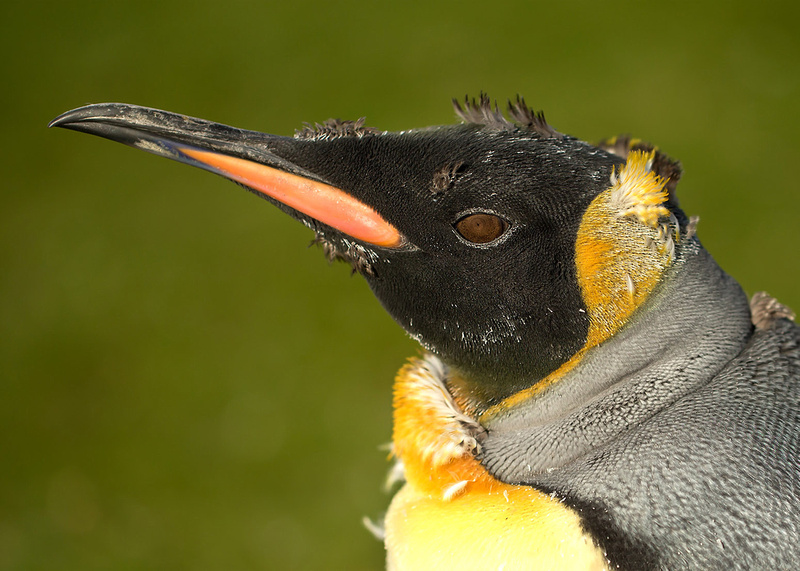 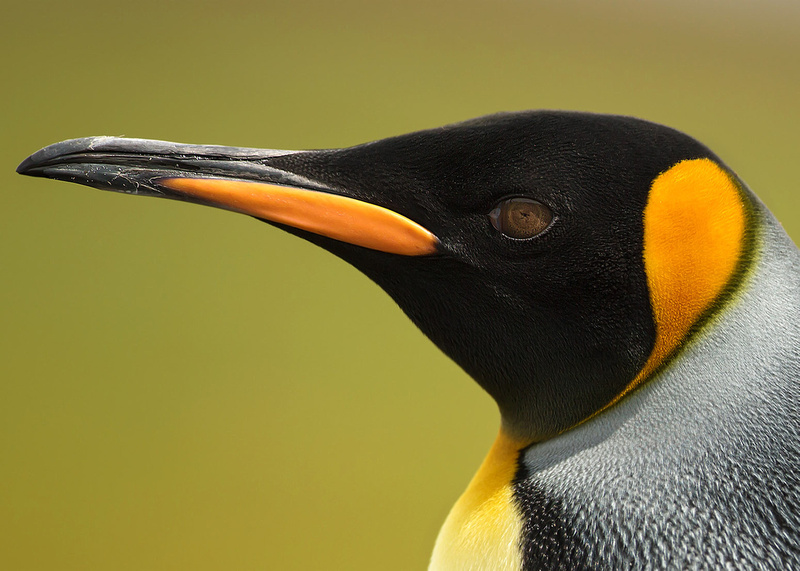 According to seaworld.org information, King penguins have been recorded with a maximum swim speed of 12 kph (7.6 mph), although they typically swim from 6.5 to 7.9 kph (4–4.9 mph.) Most dives of king penguins last less than four to six minutes, although dives of up to eight minutes have been documented. The maximum recorded depth for a king penguin dive was 343 m (1,125 ft.) At night King penguins dive to the depths of less than 30 metres (98 ft).

During three days at Volunteer Point, the weather didn’t let us down and there was plenty of activity from the penguins on the beach.

King penguins are aquatic birds and spend lots of time in water or close to it. 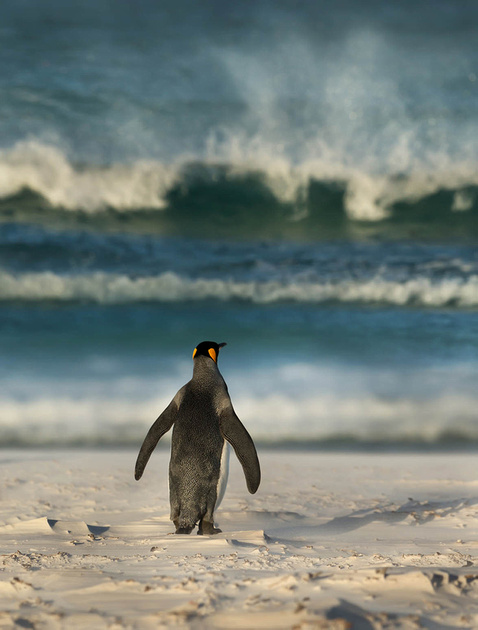 Close up of a King penguin (Aptenodytes patagonicus) standing on a sandy coast and watching at a stormy ocean, Falkland Islands. 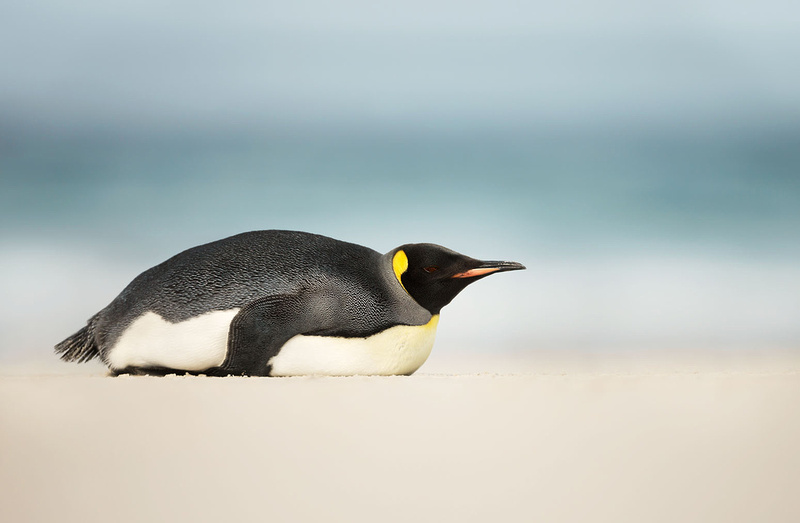 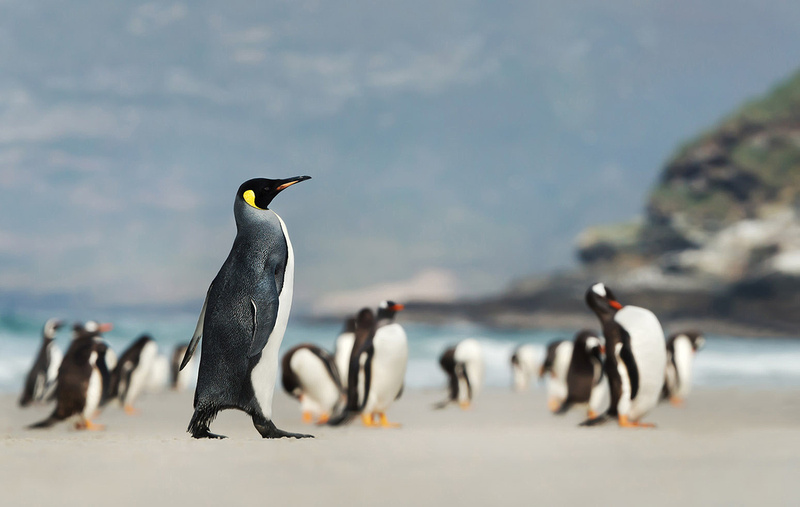 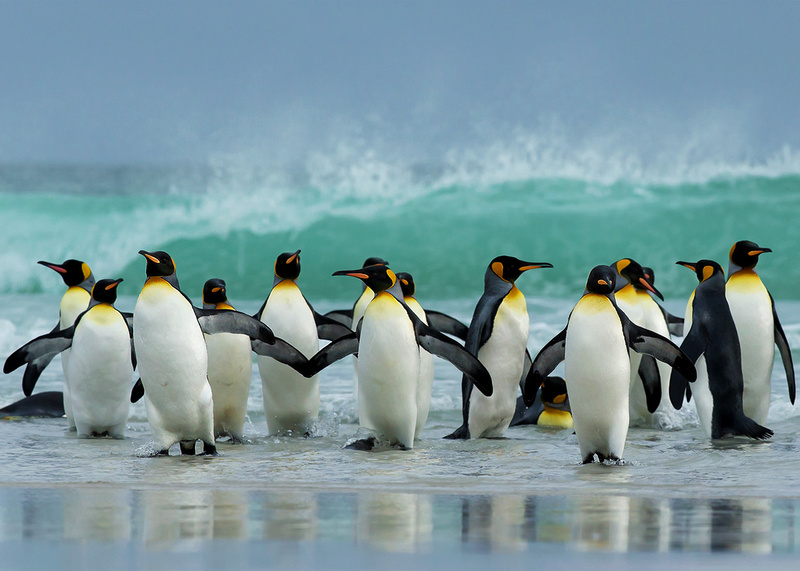 The last morning before our departure we headed back to the beach for one more time. The beach was covered in a thick blanket of mist. 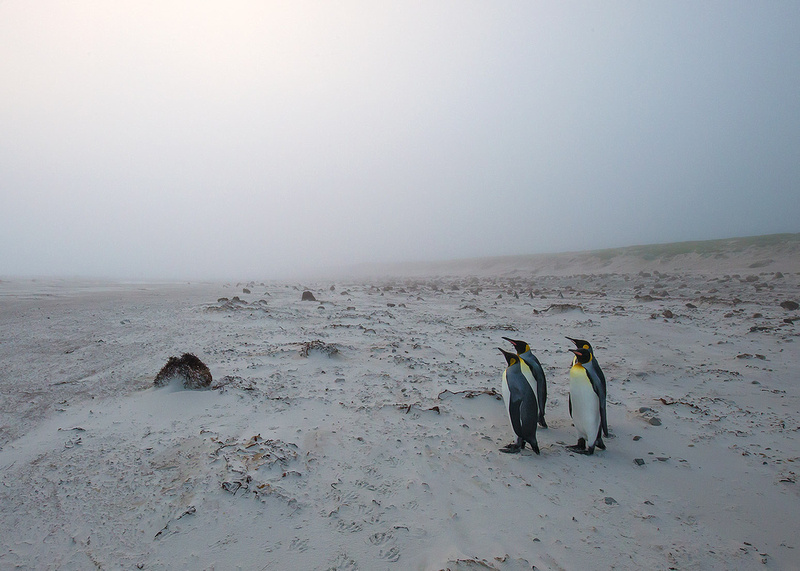 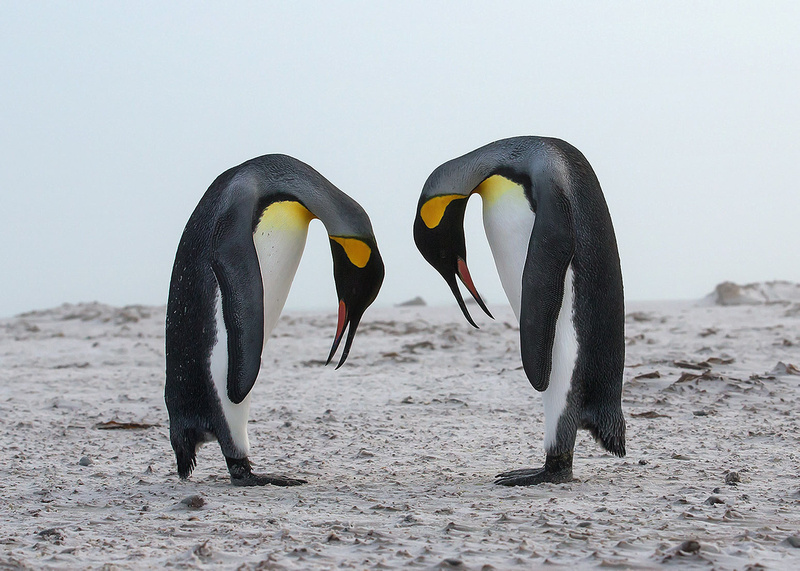 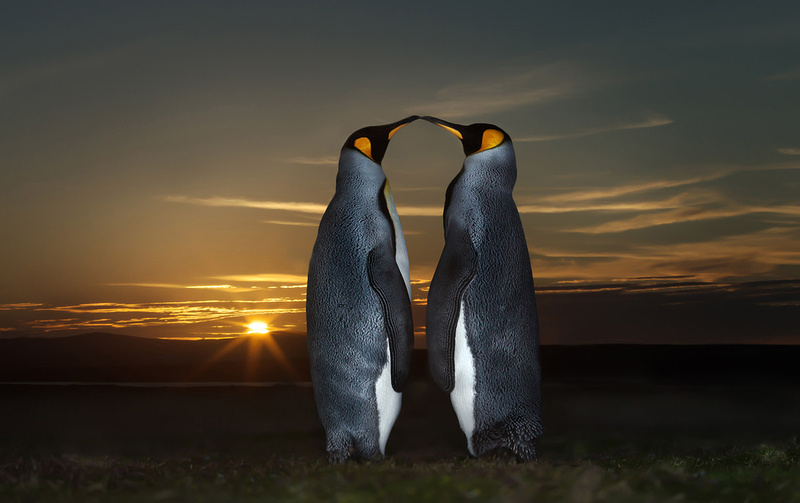 Overall our stay at Volunteer Point was brilliant. We were very fortunate that our problematic accommodation situation was resolved thanks to wardens Derek, his wife Trudi and their friends. Two nights we stayed in a lovely warden's house and one in a warm cabin lit by candles. Thank you Derek and Trudi once again for your hospitality and of course delicious meals. Grilled chicken and fish chowder were exceptionally tasty.

More about travel arrangements and wildlife photography in the Falkland islands please read in our blog.