Once we didn’t know where Shetland Islands were and now it is one of our favourite destinations.  For this we have to thank two people – photographer Danny Green, who convinced us to go there and photographer Dr. Richard Shucksmith who showed us the beauty of the islands and helped us to discover fascinating inhabitants of Shetlands – Eurasian Otters. The days we've spent with this shy and elusive mammal were the most exited but at the same time it was one of the most challenging photographic experiences. But we just loved it; we loved every minute of it. Even now we get excited when we think about it.

Shetland Otters are active during the daylight and they tend to fish on low tide. Every day we checked tide times and according to it arranged our day. In general, we used to photograph otters from early morning till 10-11 am and then in the afternoon after 5 pm. The pattern of a photographic day was the same -  a long walk by the coast looking for spraint, scanning the water, kelp beds and banks where otters have their holts. It's quite difficult to spot the animal  and it's very easy to overlook especially in the kelp beds.

We've spotted a female Otter with a single cub first. 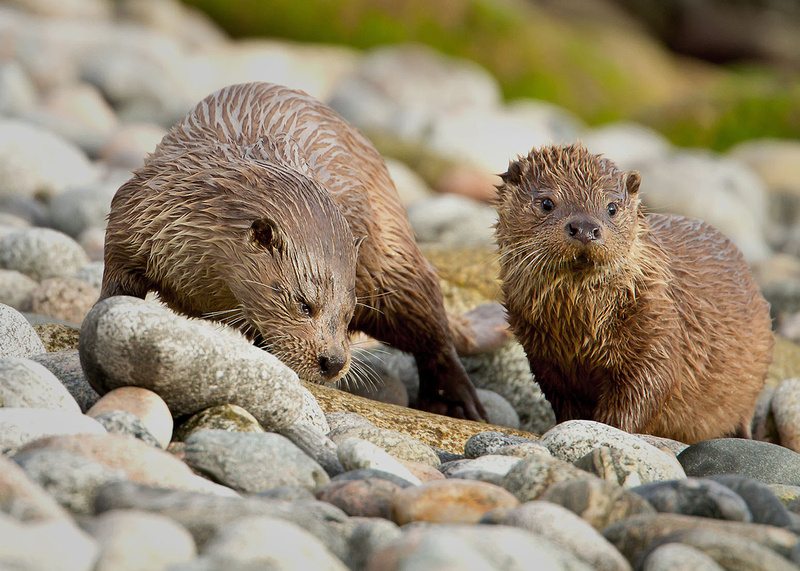 Males do not assist with raring cubs, so mothers look after the little ones and feed them for a year. Fish is the main food, but they also take crabs, crayfish, birds, mammals. 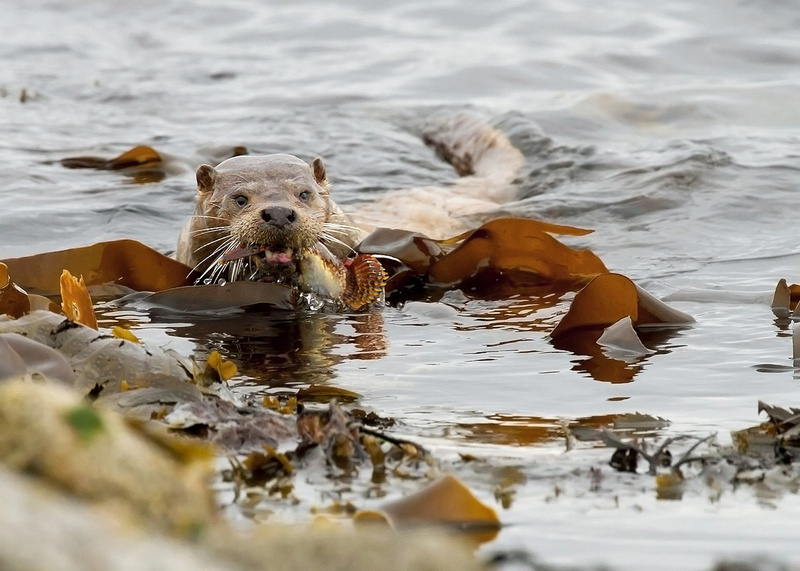 We carefully followed the Otters for couple of hours. It was a tough but fun activity. We believe it looked a bit weird: three adults with huge cameras crawling on the grass, ducking down behind rocks and running on the pebbles in slouching position. The efforts paid off and we were rewarded with a rare mom and cub playing scene. 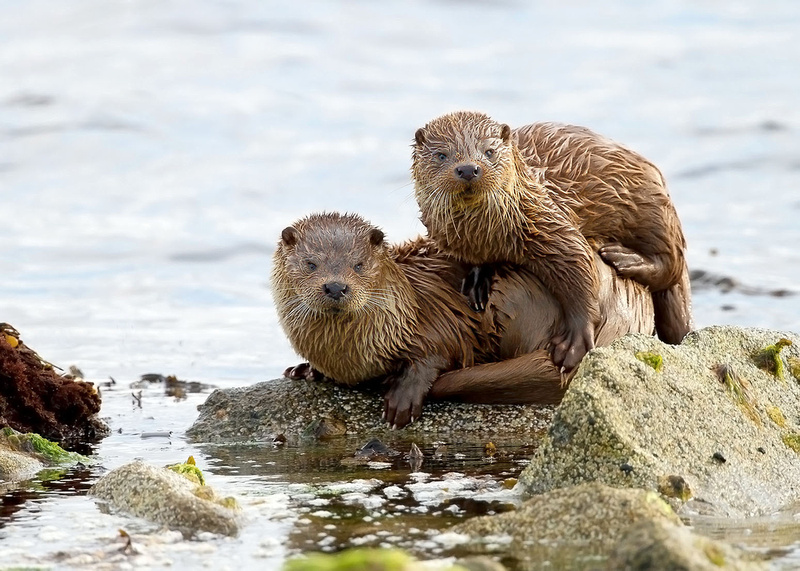 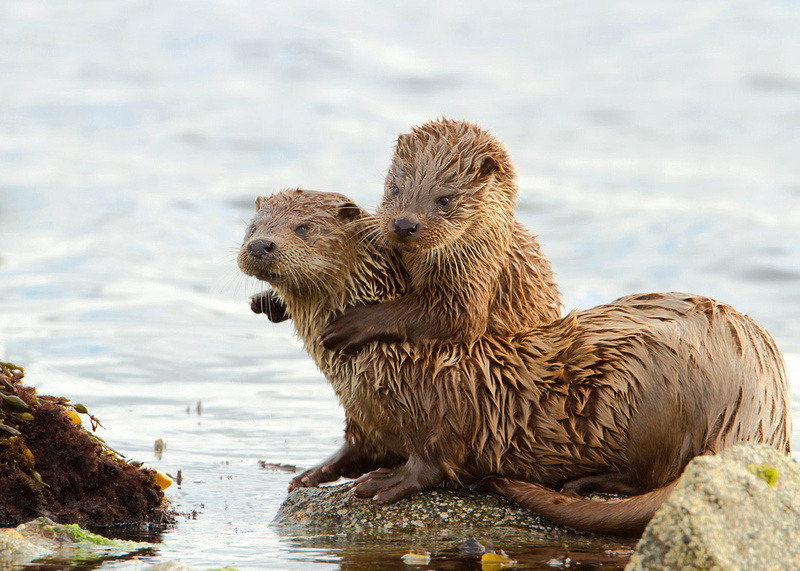 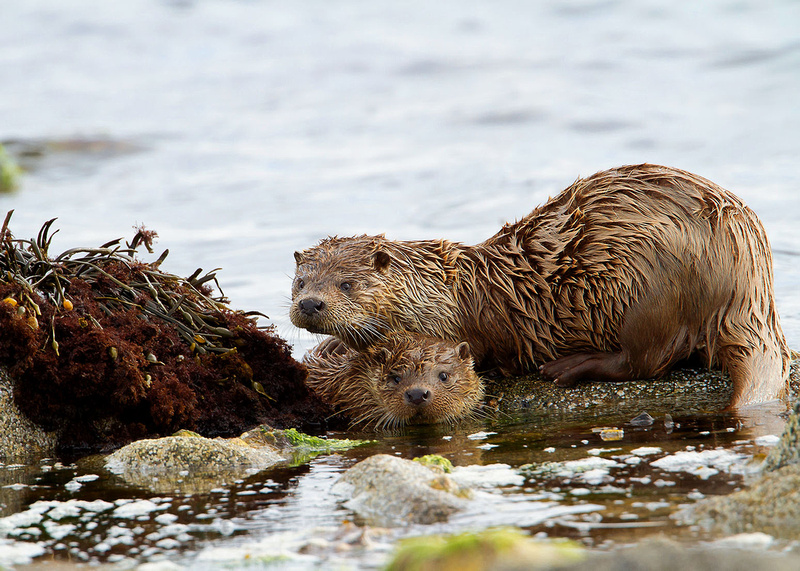 Sadly, by the coast we spotted a dead gannet trapped and strangled in a fishing line. 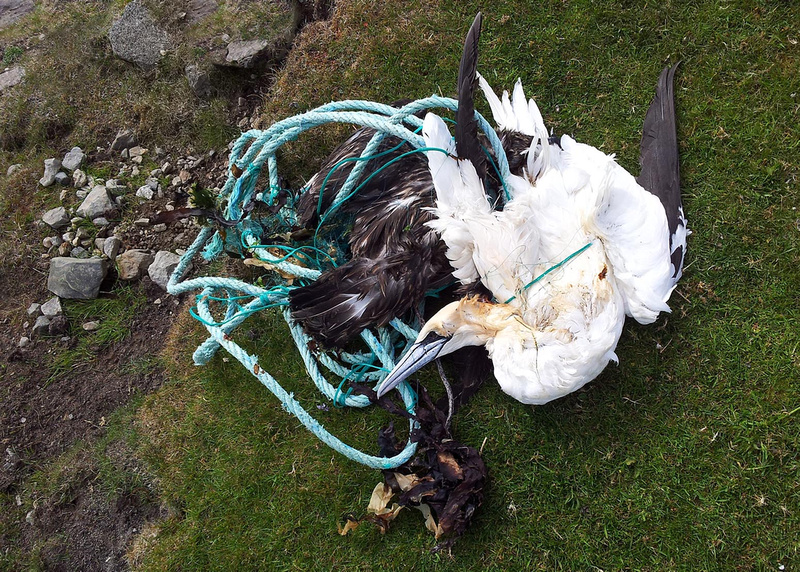 Otters have bad eyesight; they can only really detect movement or unusual high silhouette. That day by sitting still close to the rocks and fresh water stream where possible otters wash their fur from salt, a female appeared no further than two meters (6.5 feet) away in front of us; we could even hear her sniffing; as the wind was blowing from the sea towards us she couldn't really detect our smell. We couldn’t fire the shutter as it would have scared her away. But it was so so tempting...

Not all the days were so lucky but they still had a very happy ending. We remember we came to the coast before 5 am. We kept  scanning the water and kelp beds for otters with no luck till 10 am. We felt so tired that could barely put one foot in front of the other. Back at the hotel the spirits were low but lovely images from yesterday brought back a tiny smile on our faces. The smile became extremely big after Richard's call and his magic words: “Let’s go ottering.” Tiredness was gone in a second. It was getting darker and drizzling from time to time, but Otters did not disappoint us this time. We saw a male Otter, a female with two cubs and the same Otter with one cub, which we managed to photograph again. 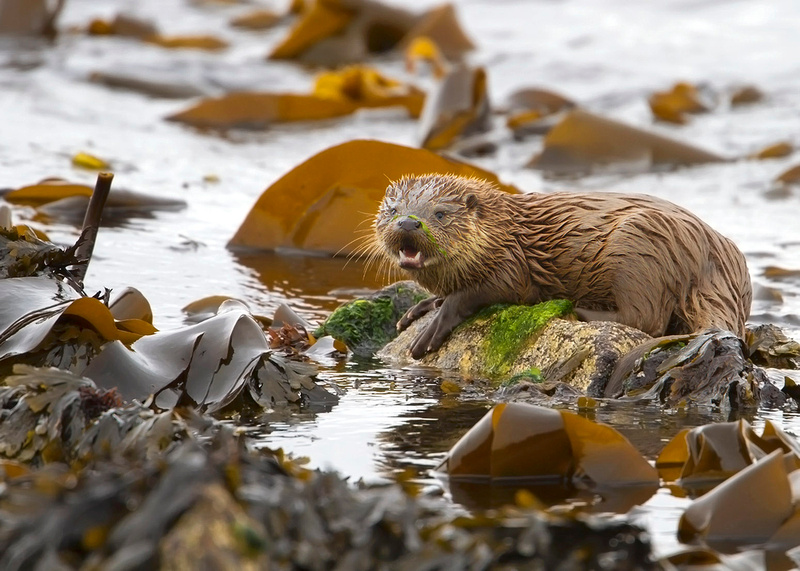 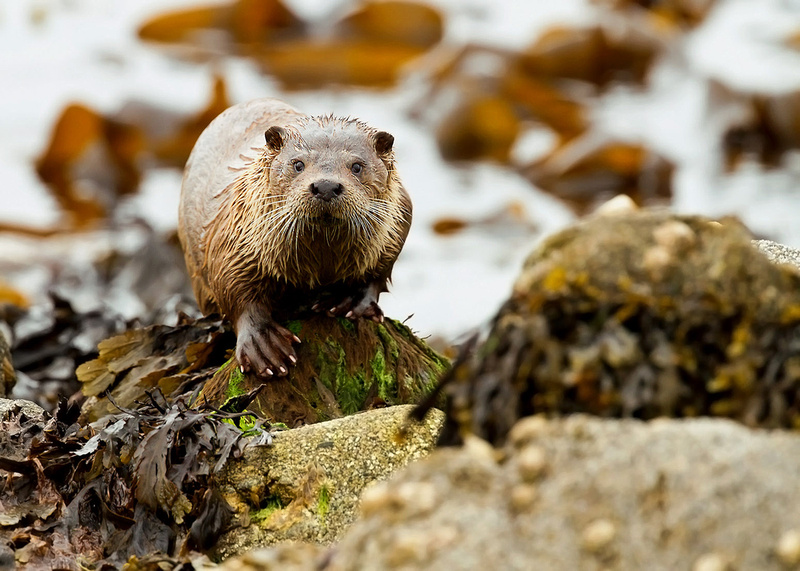 Photographing otters was truly one of the best experiences.

The rest of the days in Shetland islands we spent in Hermaness NNR, Fetlar, Sumburgh Head RSPB and Bressay.

Shetland islands are rich in wildlife. Over one million birds of 70 different species breed here. One of the loveliest and cutest birds without a doubt is Atlantic Puffin which could be easily found in Sumburgh Head and Hermaness NNR. 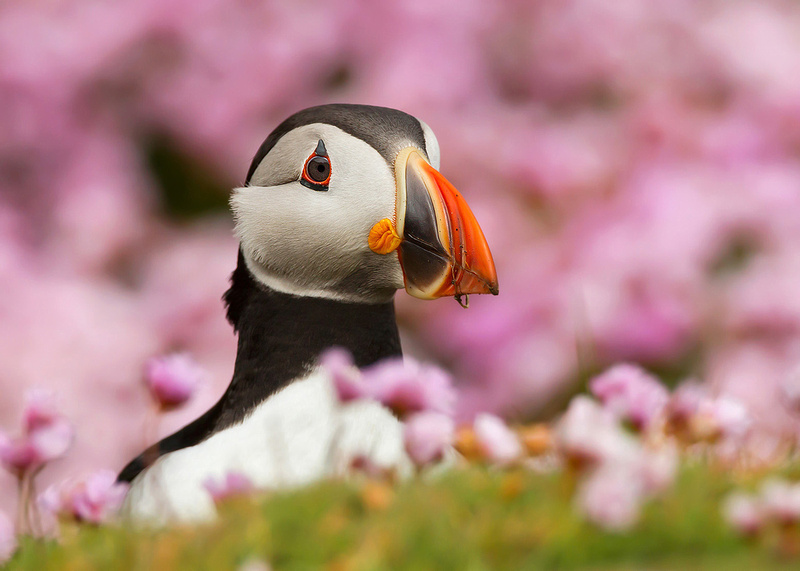 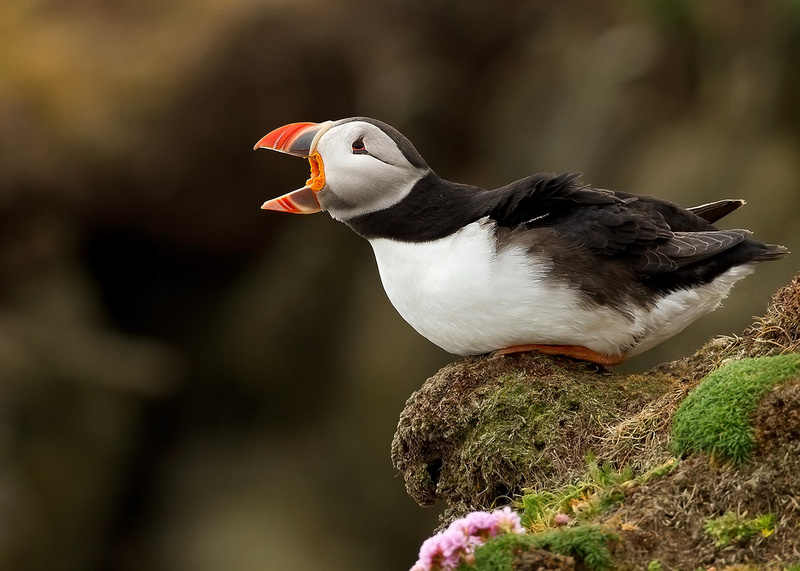 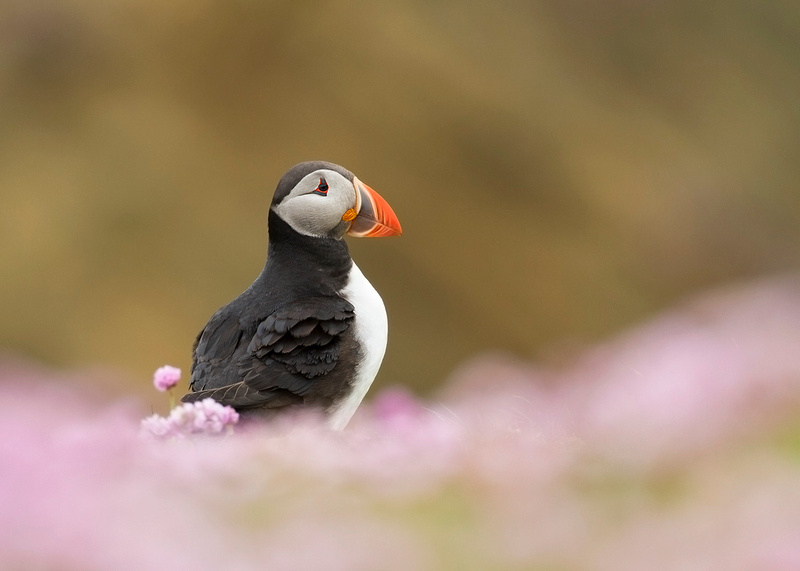 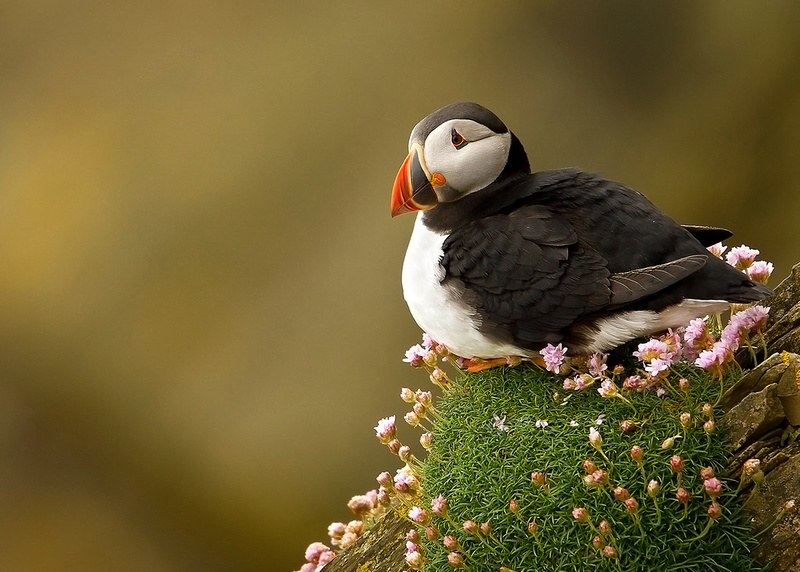 Hermaness on Unst is the most northerly inhabited island in the UK. It holds a large and noisy gannet colony with over 10 000 pairs of birds. The sounds are heard and smells of thousands of birds are sensed before the colony is visible. 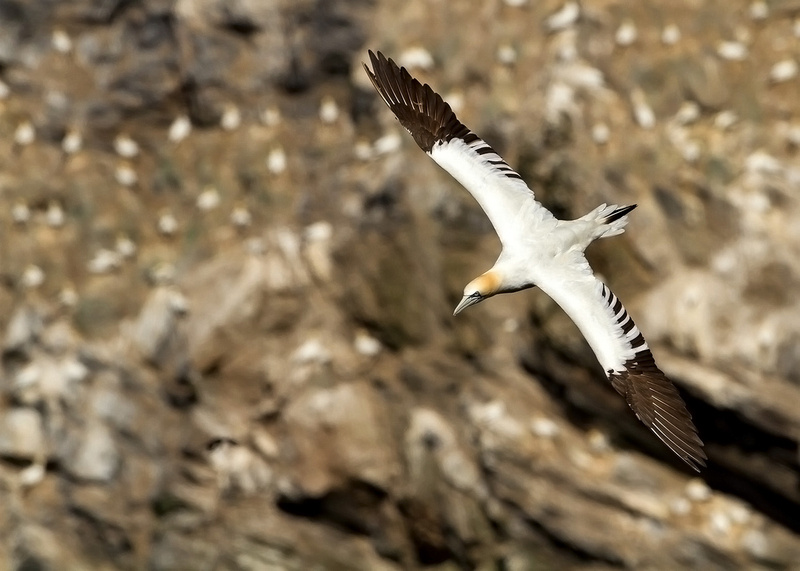 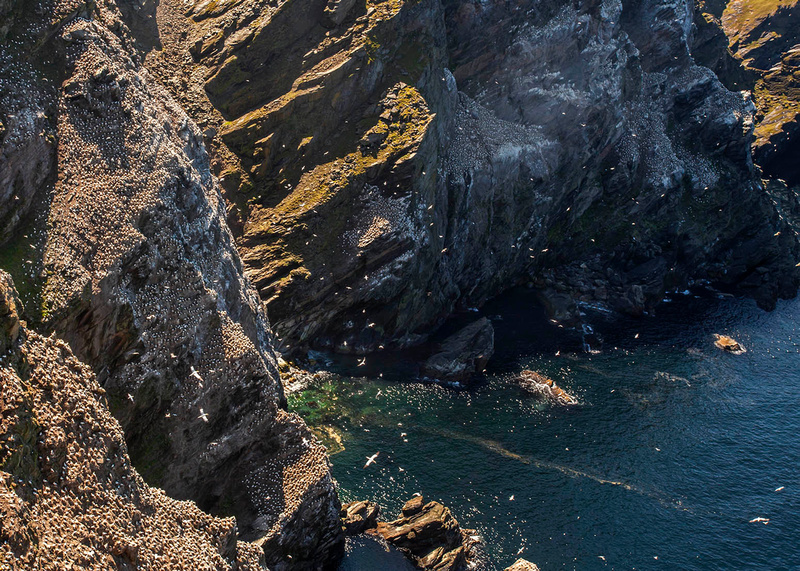 By walking along the cost towards the lighthouse we've spotted a dead sperm whale. 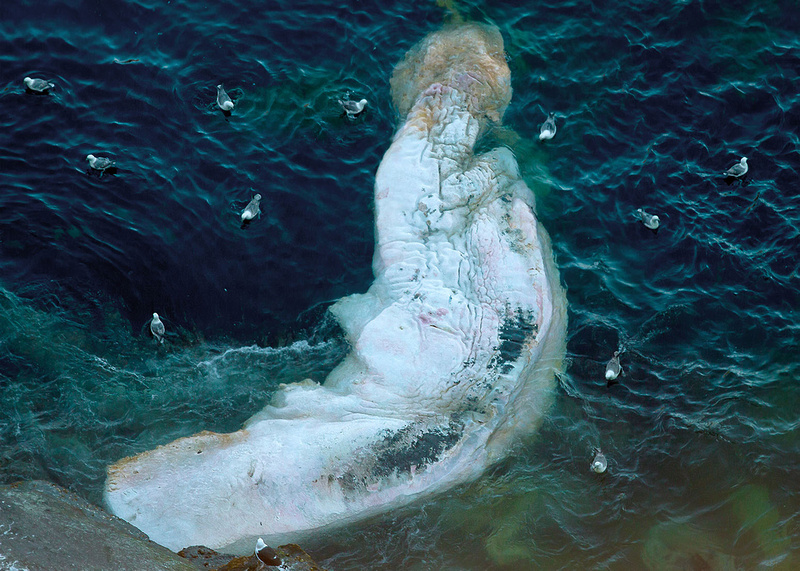 Hermaness holds world's third largest colony of Great Skuas which are also know as bonxies or flying pirates. They are very territorial birds and will attack anyone entering their domain especially during the breeding season to protect their chicks. 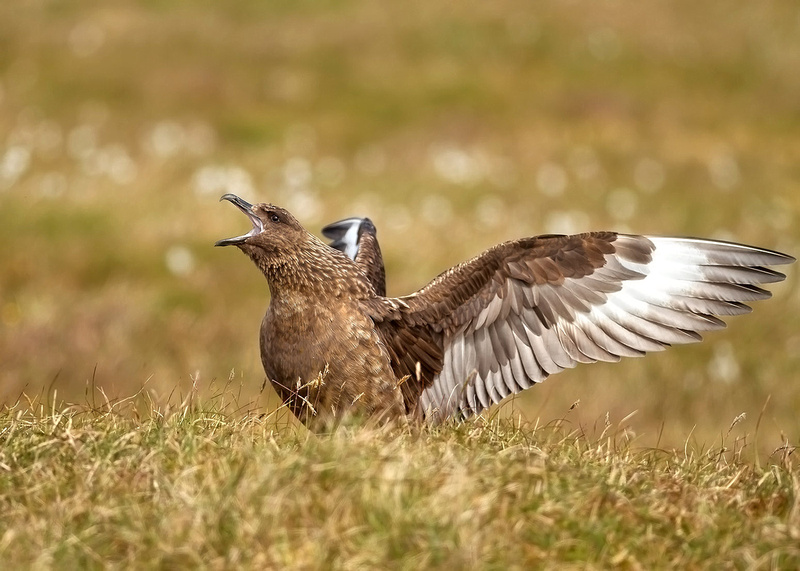 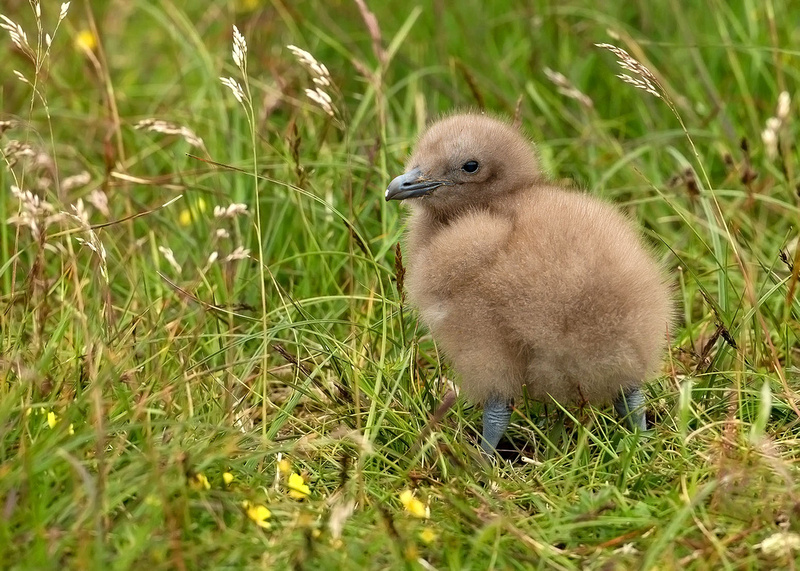 Fetlar, to the South of Unst and not far from Hermaness, is the fourth largest island in Shetland. It holds 90% of the British population of Red-necked Phalaropes. They are brightly-coloured and remarkably tame birds. 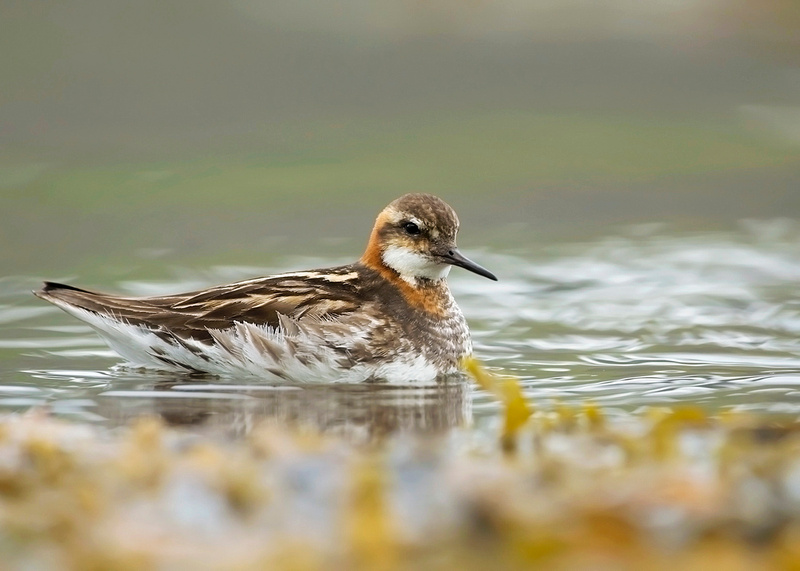 Shetland Wren, Northern Wheatear and vocal Oystercatcher are fairly common on Shetland islands and quite easy approachable. We took the images just simply walking along a farm road near Sumburgh Head Nature Reserve. 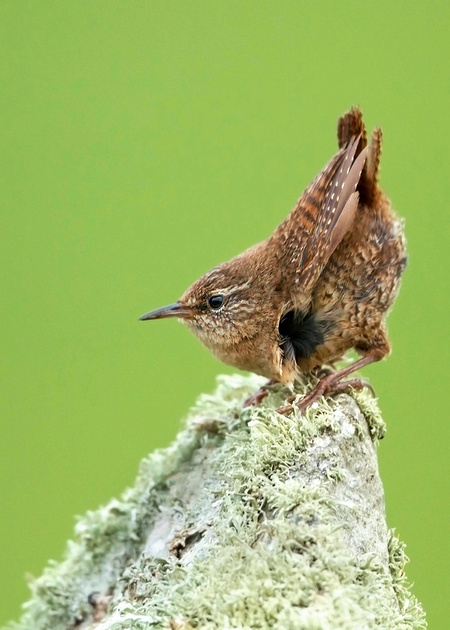 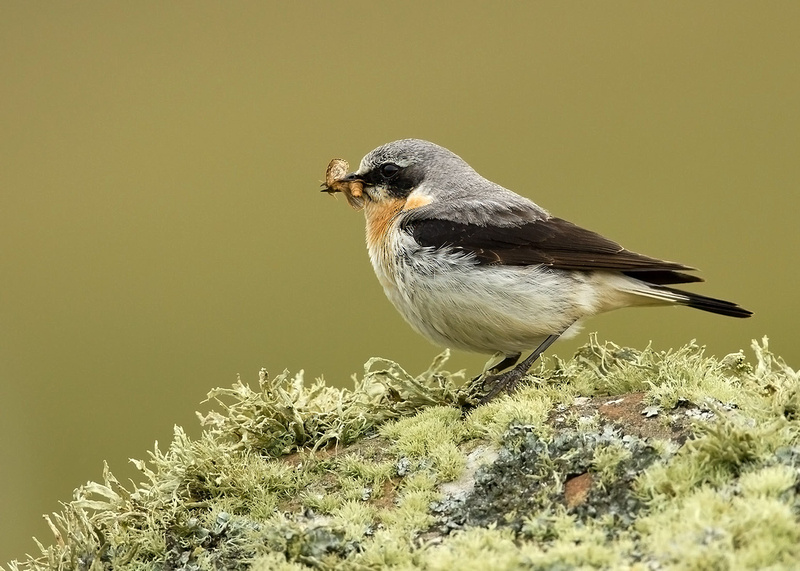 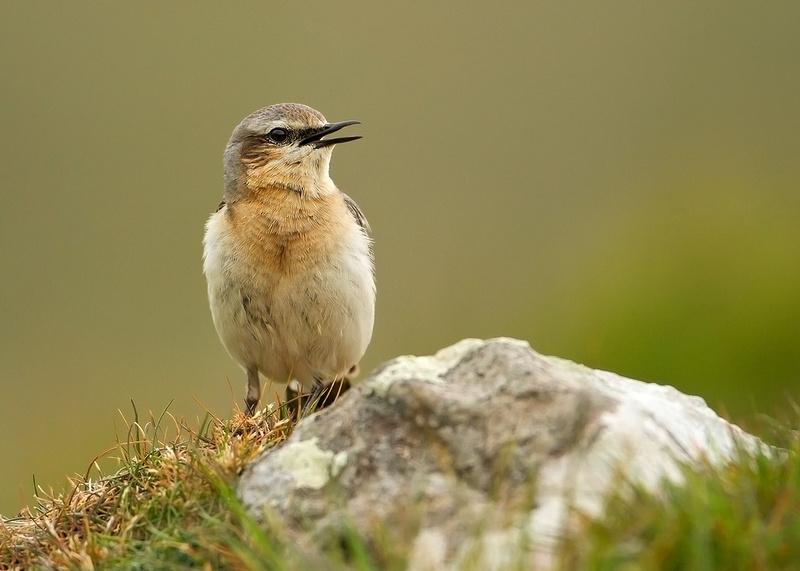 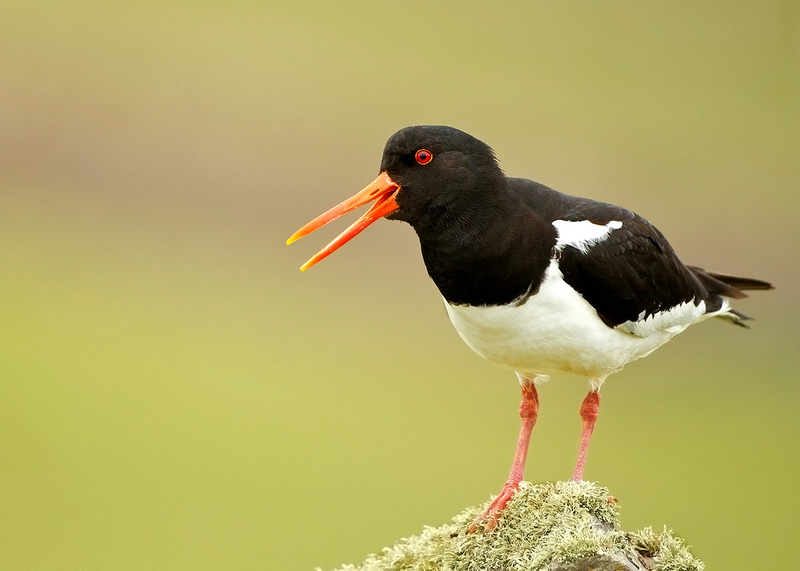 The last day of our trip in Shetland Islands we planned to spent with a large and noisy gannet colony in Noss NNR. Unfortunately the weather was not on our side; a small dinghy could not take us over to the tiny island because of poor weather and rough sea. We had all day ahead of us, so we made a decision to stay in Bressay.

The weather was very changeable, rather cold and windy, with scattered showers and sunny spells. Walking along the coast we were away from modern world and the sense of freedom and remoteness simply fascinated us. Calmness and harmony didn't last for a very long time though. It was disturbed by an attack of Arctic Terns and Bonxies. We mistakenly stepped into their domain. Away from their colonies we had a brilliant walk along the coastline with a good view of Fulmars - Shetland's commonest seabird. 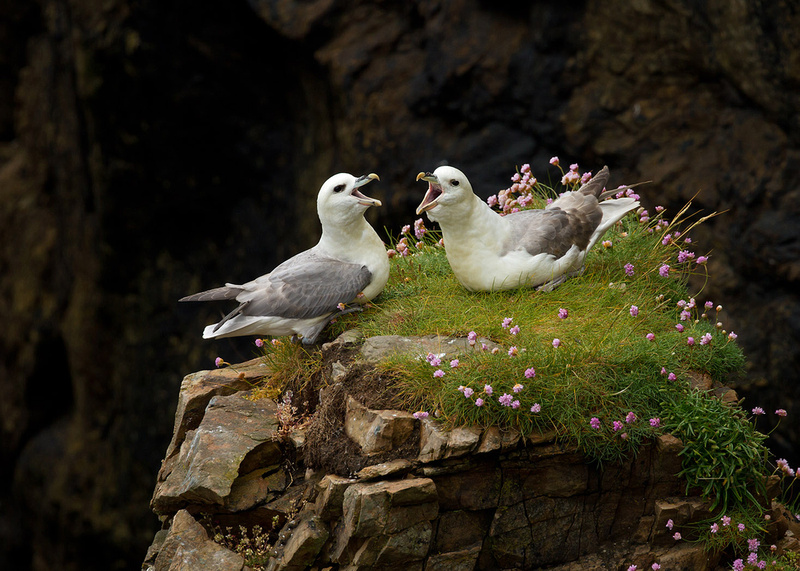 As it was an early summer it wasn't too difficult to spot some juveniles exploring new areas. 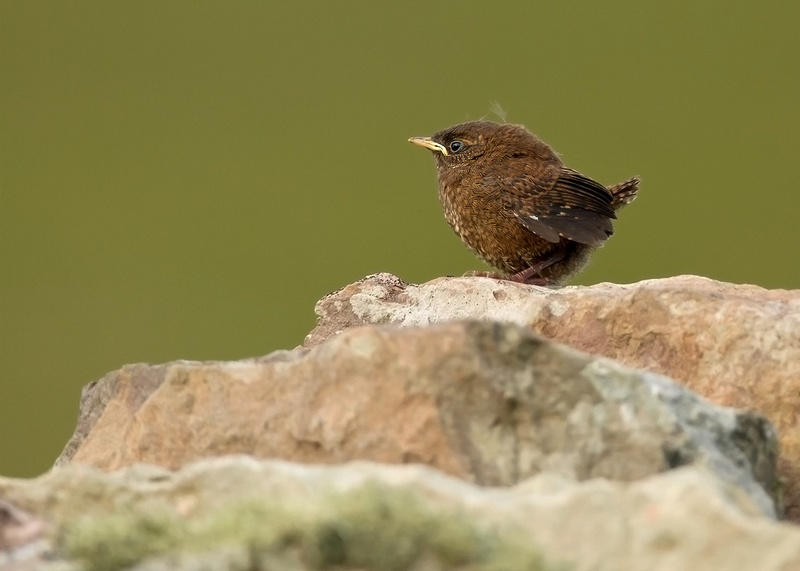 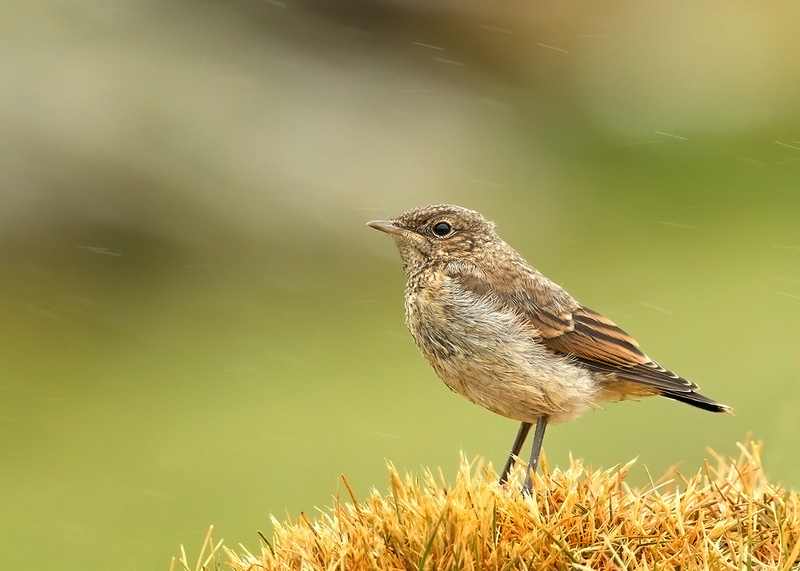 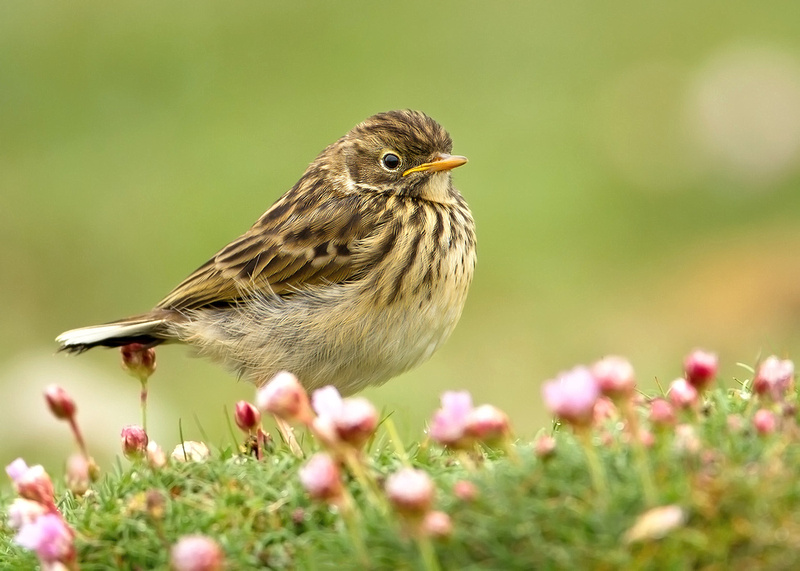 Walking along the moorland we had an amazing encounter with a Golden Plover. Luckily at that moment we got some decent light to work in. 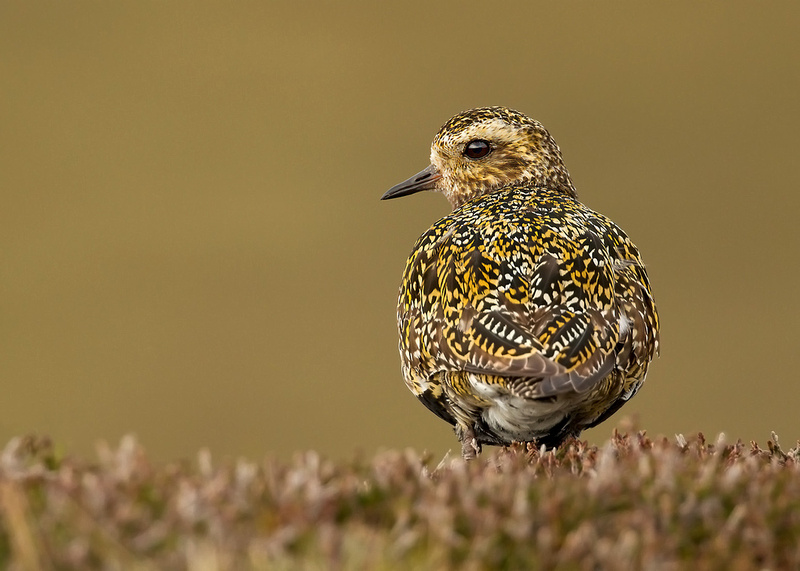 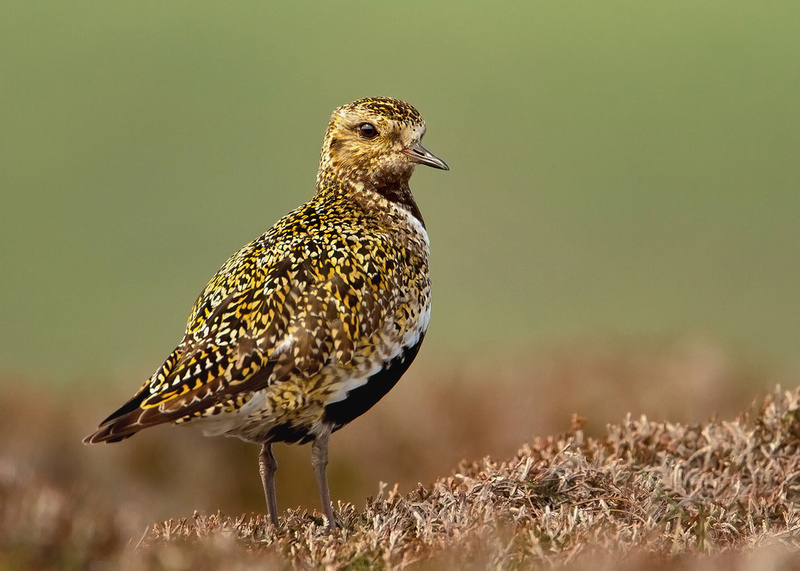 It had already been a great day but soon it got even better as we've spotted a Red-throated Diver in one of the lochs. Our time was short as we only had 1.5 hours left before the departure of our ferry. 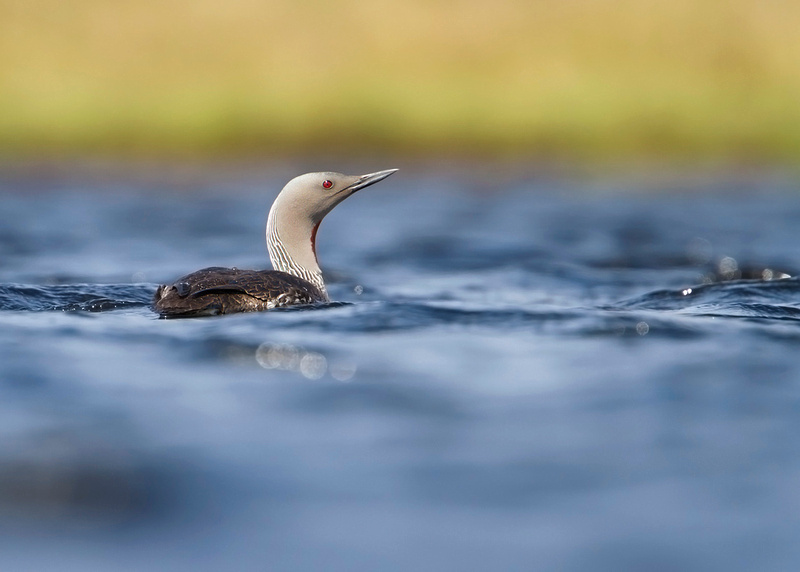 The time passed so quickly, that we realized we have to run and sometimes even sprint to catch the ferry. With heavy gear on the back it was not easy...

Our journey in Shetland islands was over. It was an amazing experience, full of laughter and good energy. We are left with a feeling of wanting to go back already ... even with sore legs.