If you want to see and photograph brown bears, there are not many better places than Finland.

This year we've spent a week in July and a week in August photographing bears. 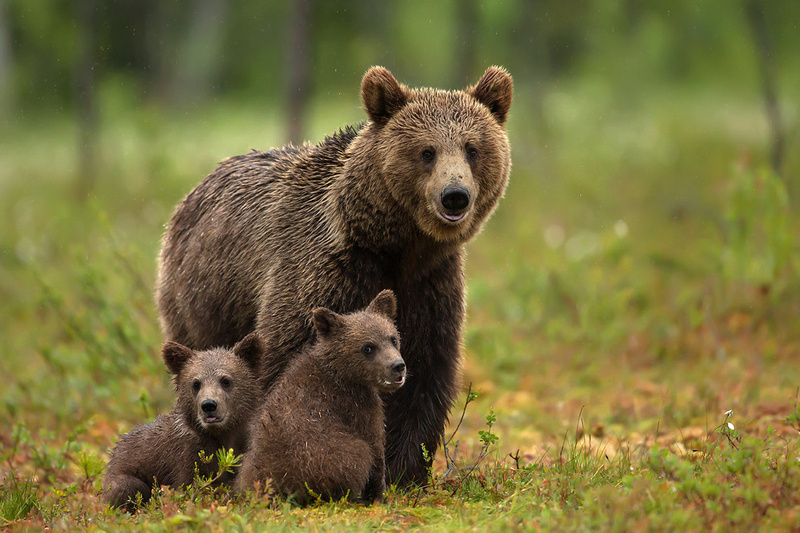 Travel info. We landed in Kuusamo airport and later were transferred to Martinselkonen nature reserve. The journey by a car which was arranged via Martinselkonen wilds centre took about 2 hours (~150 km). The reserve is situated close to the Russian border in Eastern Finland. It is 170  km from Kajaani, 180 km from Kuhmo and 270 km from Oulu; so you can choose to fly to these airports instead of going to Kuusamo. 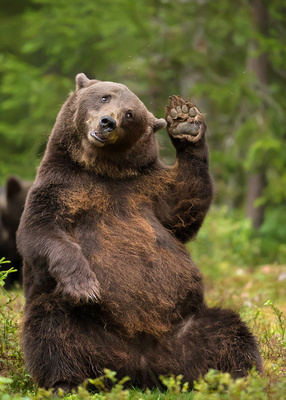 The first bear photo session starts the following afternoon. The hides are around 15 minutes drive from the lodge. There is an option to book a main big hide for group of people or pro hides for 2-3 people. We've chosen pro hides in three different locations: swamp, lake and forest.

All the trips can be booked directly using Martinselkonen website.

Lenses. Lenses of length 300-600mm are most useful in pro hides. Most often we used 300 and 500mm but 70-200mm was always ready on a spare camera for the moments when bears come very close to the hide. ...and it actually happened quite a lot.

There is no need to bring a tripod, however you may wish to bring a tripod head.
We were taken to the hides around 4 pm and stayed overnight till about 7 am. July is the best month to photograph bears.

On our arrival to the swamp hide, the rain had poured nearly all day. The forest was a slop of mud and puddles, and the water level have risen dramatically. 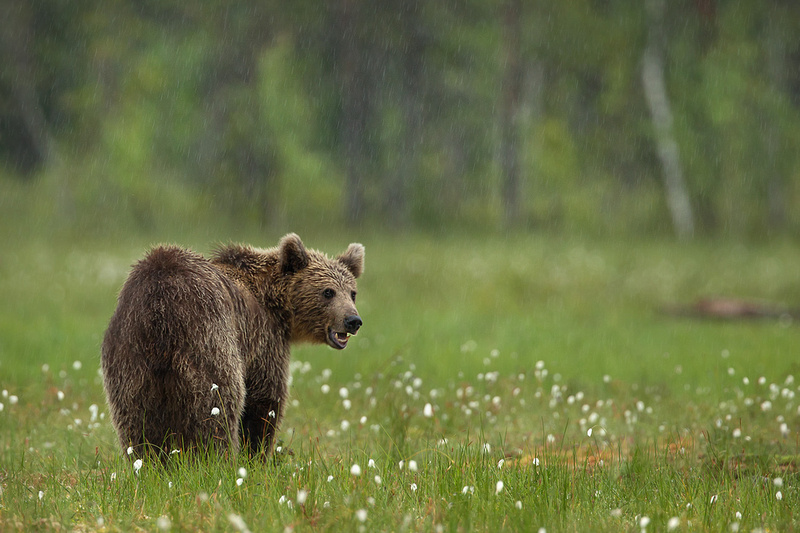 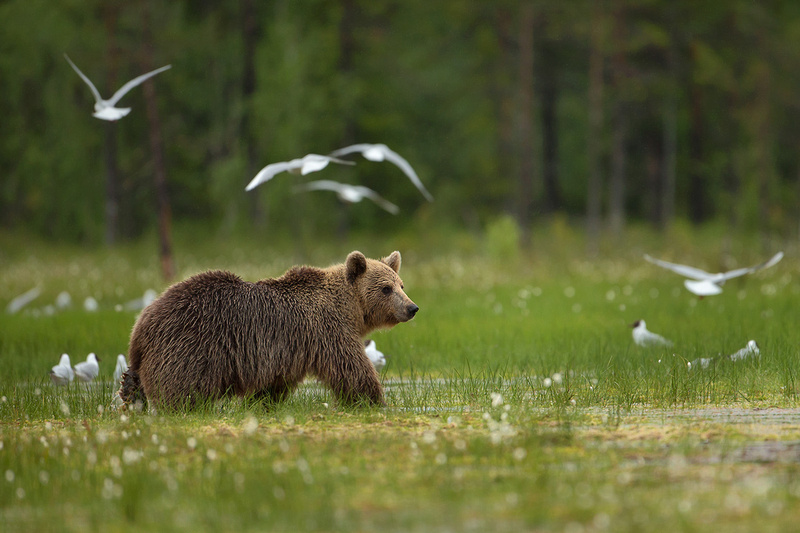 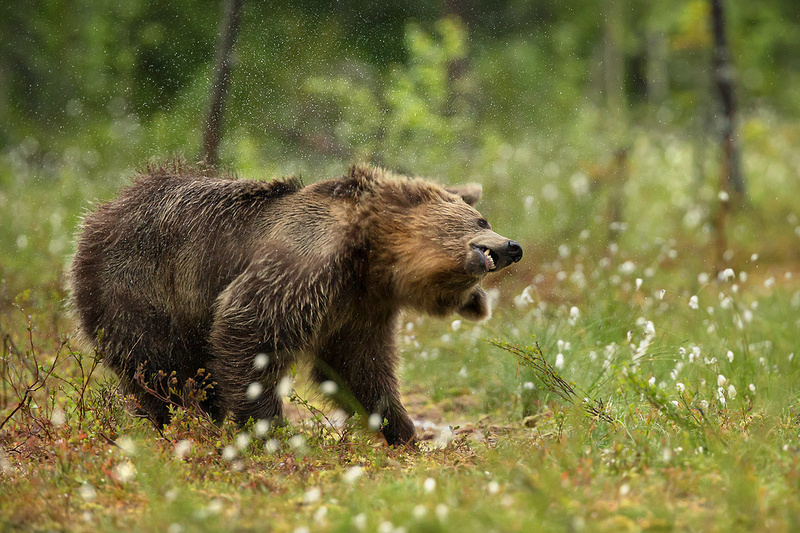 Towards the evening, we spotted a bear with two cubs crossing the swamp. 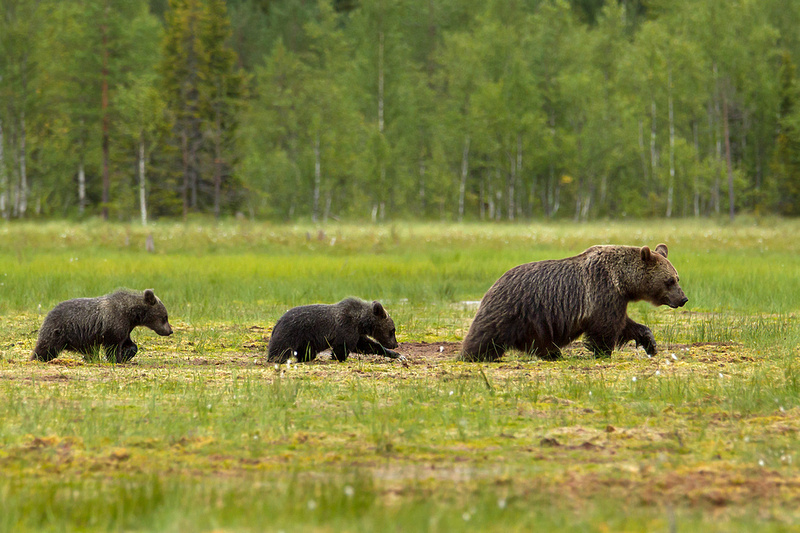 They came a bit closer to the hide but did not stay long. Mom and cubs looked alert and kept scanning the woods for male bears.​ 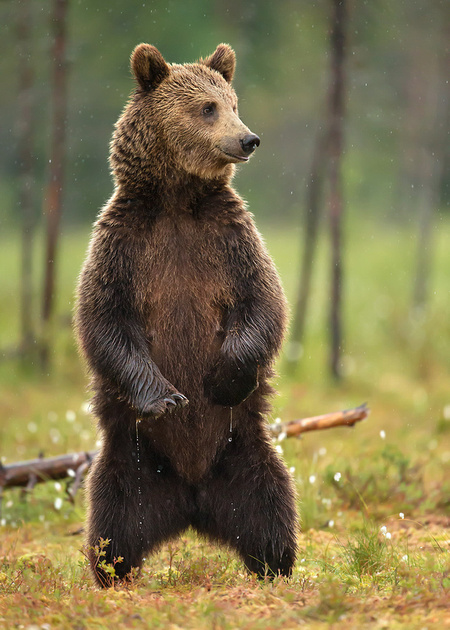 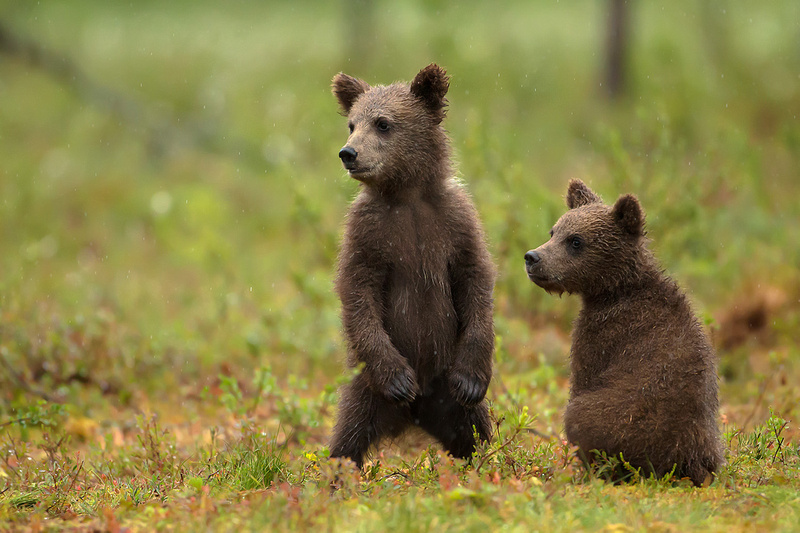 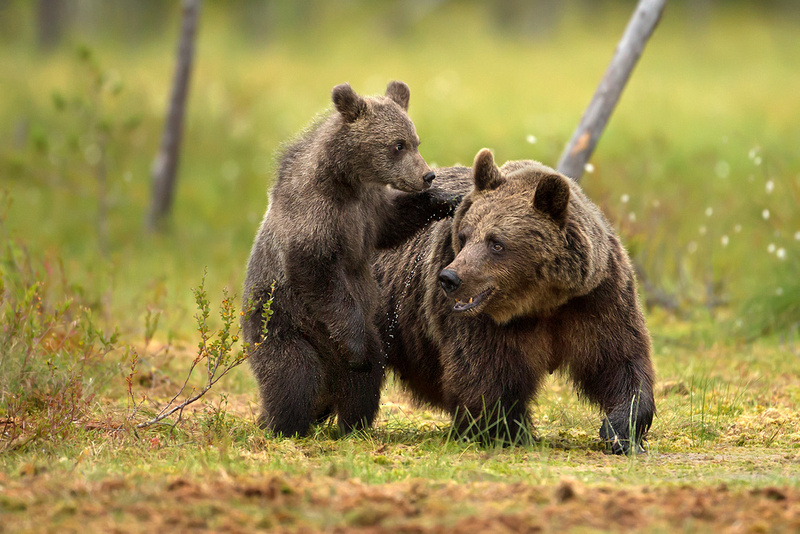 The following day we headed to the pond hide. This year cub activity by the pond was very poor. Couple years ago there was plenty of action from fluffy bear cubs who kept climbing up and getting down the trees all evening. 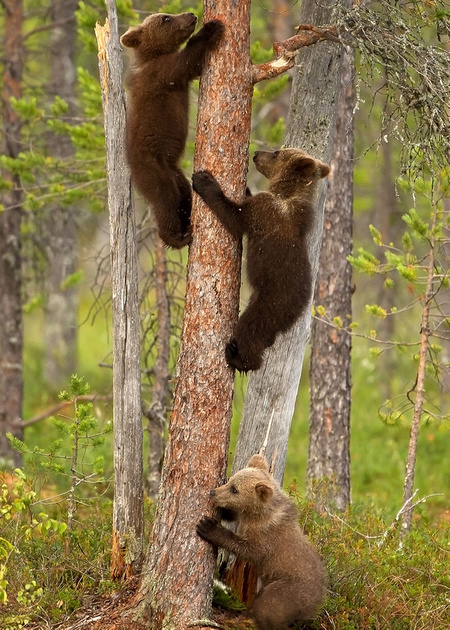 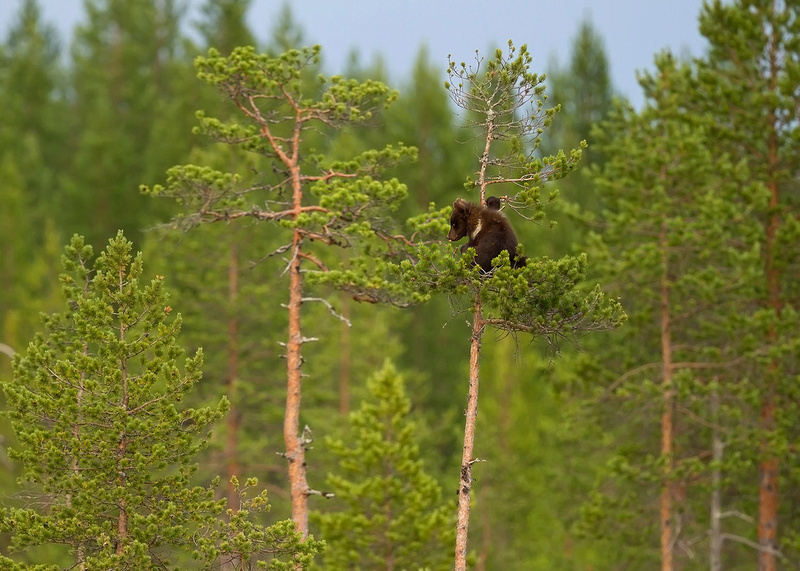 This time the area was left mainly for tough adults or adventurous "teenagers". 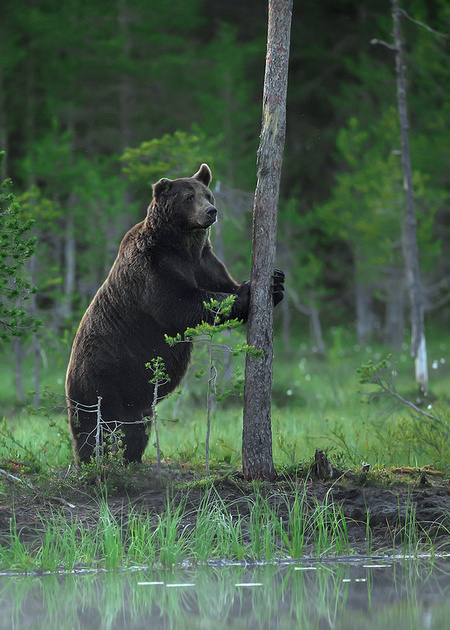 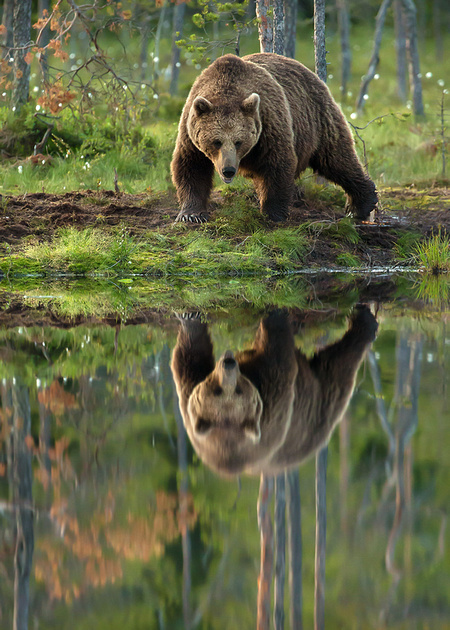 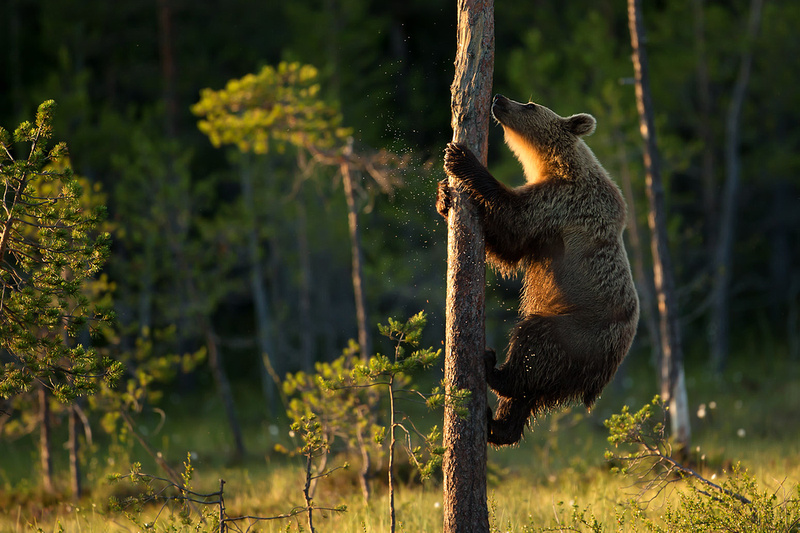 Most of the days we've spent in the forest hide. There is always a good activity not only from adult bears but from cubs as well. Of course, the area first is scanned by huge males. 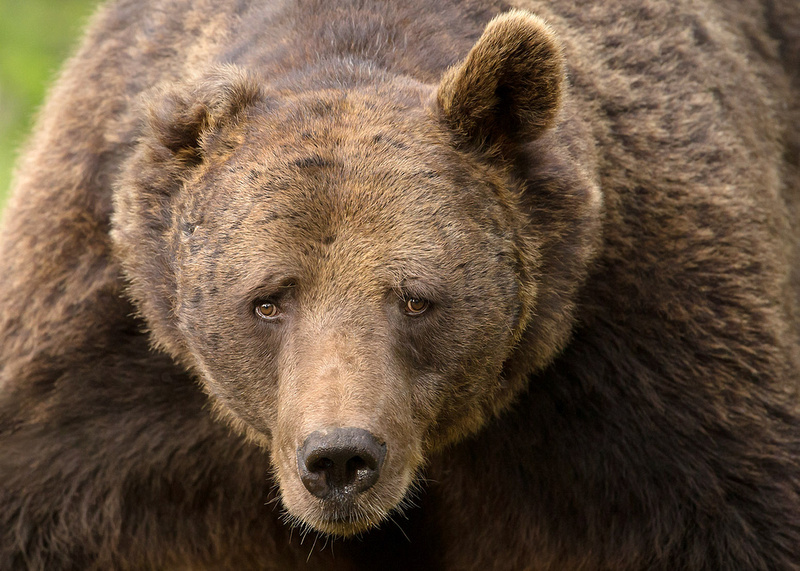 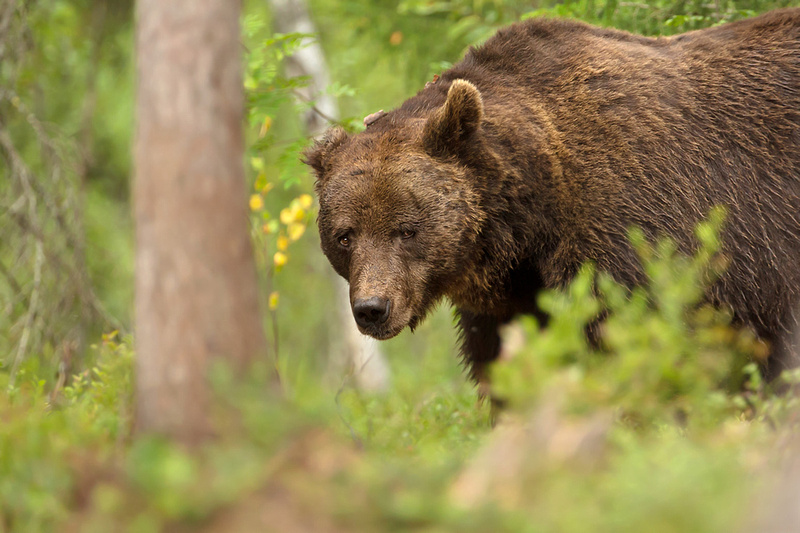 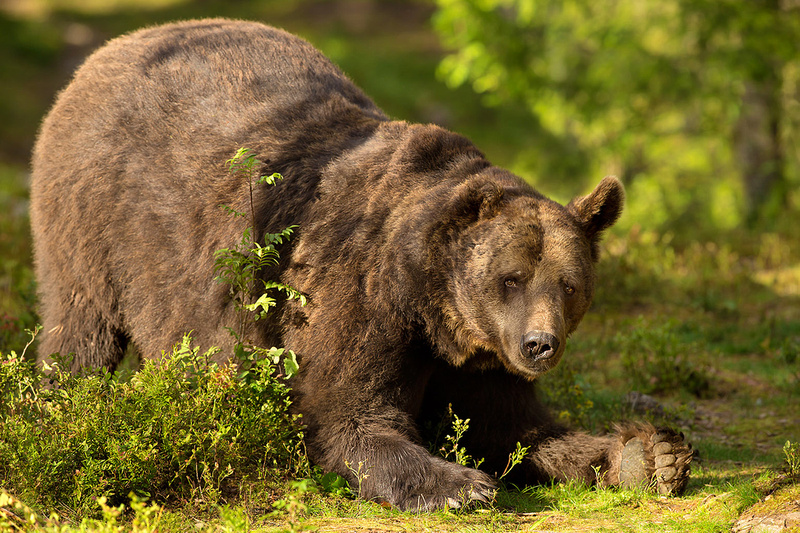 Claws can grow up to five inches long. It's like a human finger.

Is Eurasian brown bear a threat to humans? Actually, brown bears don't seem to be a great threat towards humans. They only attack humans when defending their cubs or when they are starving. There was a tragic case that took place in June 1998, Finland. A man in his forties was out jogging in the forest. He surprised a female bear with a cub close to the jogging track and was killed.

Bears live as long as 30 years. Meat takes 15 % of the diet.  Bears mostly eat berries, roots, leaves, insects, and fruit. Bears have been known to go after human grain stores for food, with some Russian Bears actually getting drunk on grain alcohol.

This year we've witnessed quite a lot bears standing on the legs. The reason behind this behaviour is to get a better smell, sight or sometimes a good scratch... 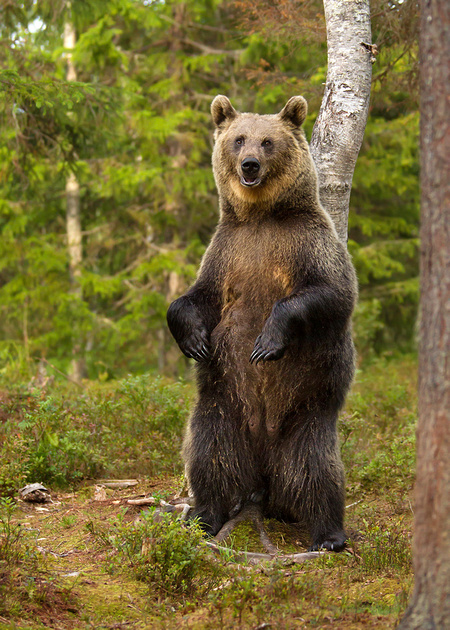 The cubs behave in the same way when they want to get a better picture of the surrounding area. 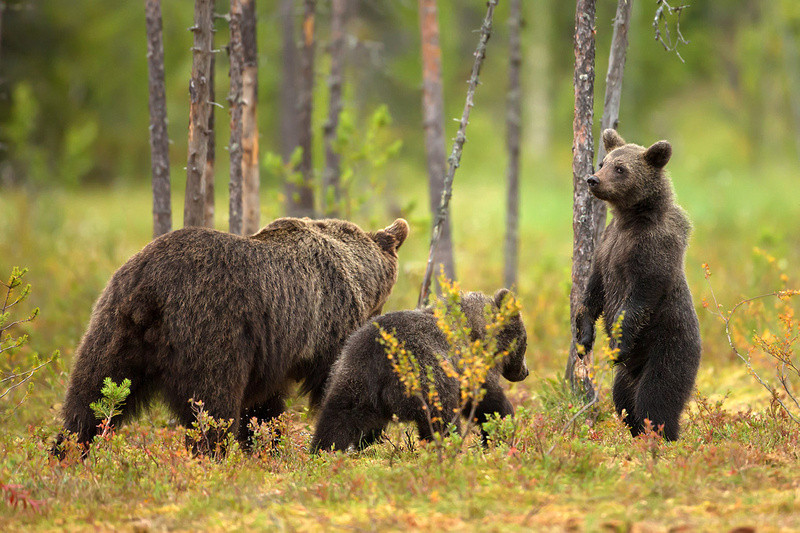 Ancient Eurasian tribes worshiped the bear; its ability to stand and walk on two legs led them to believe it was a their brother.

One of the days was particularly warm, and some of the bears kept sitting on their hind legs in the forest trying to cool themselves down. We have not witnessed this kind of funny behavior before. 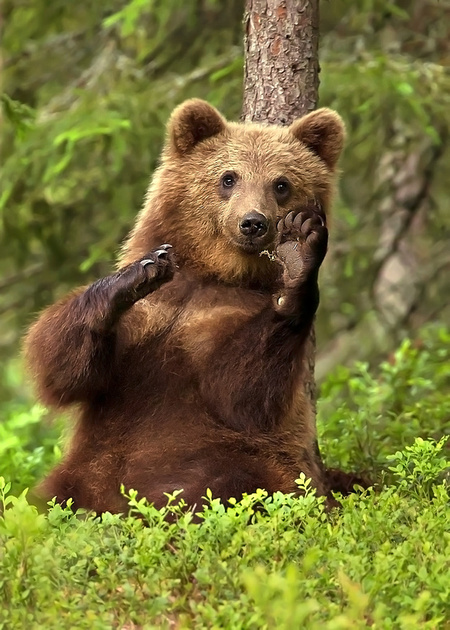 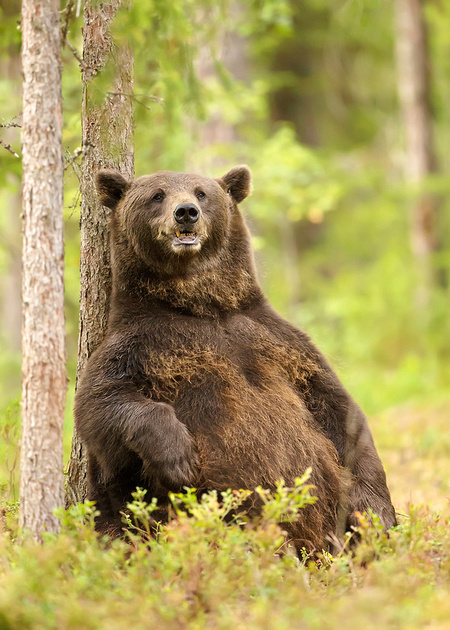 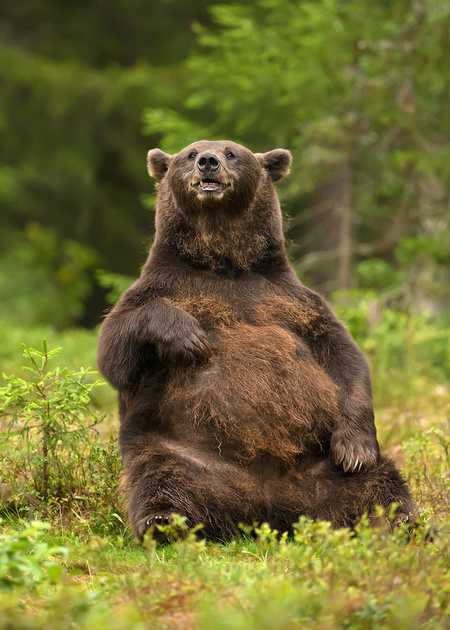 When the environment is safe with no male bears around, there is plenty of action from fluffy cubs. 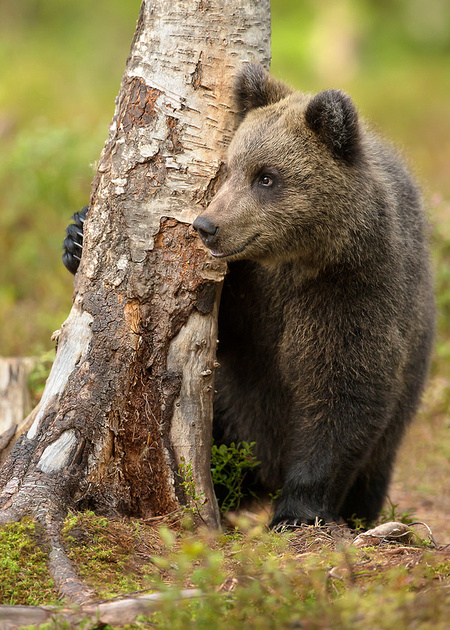 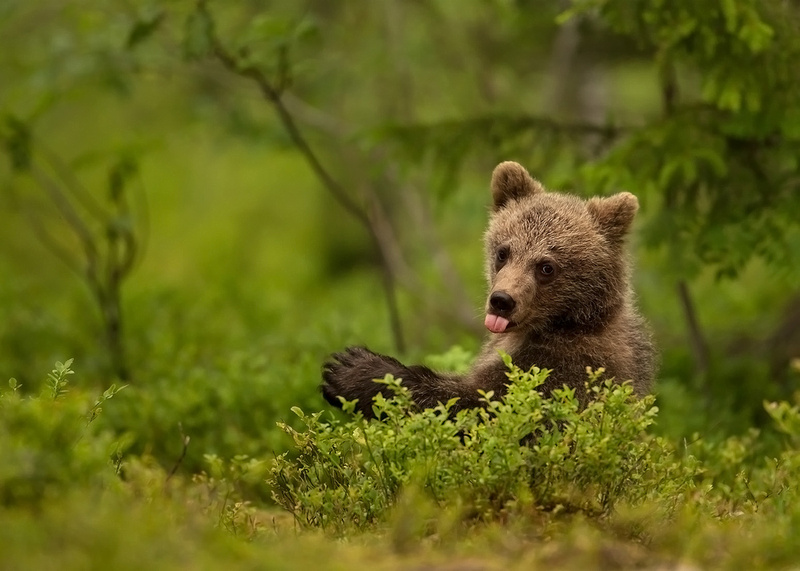 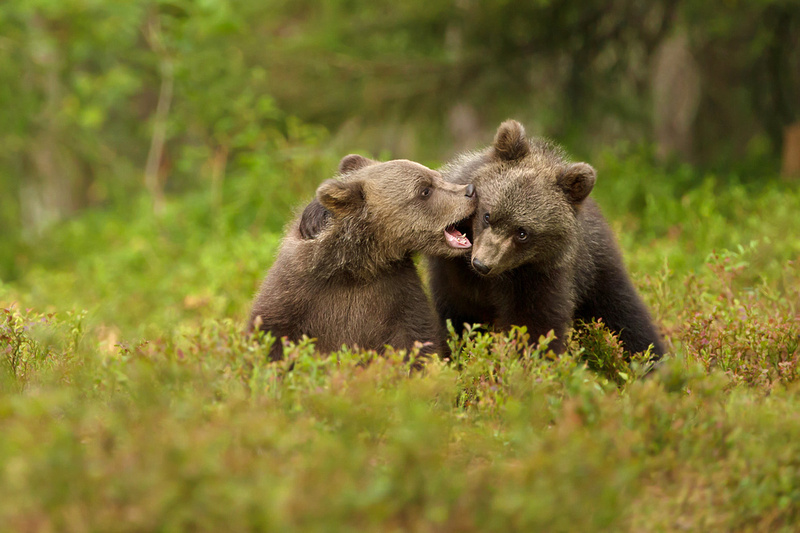 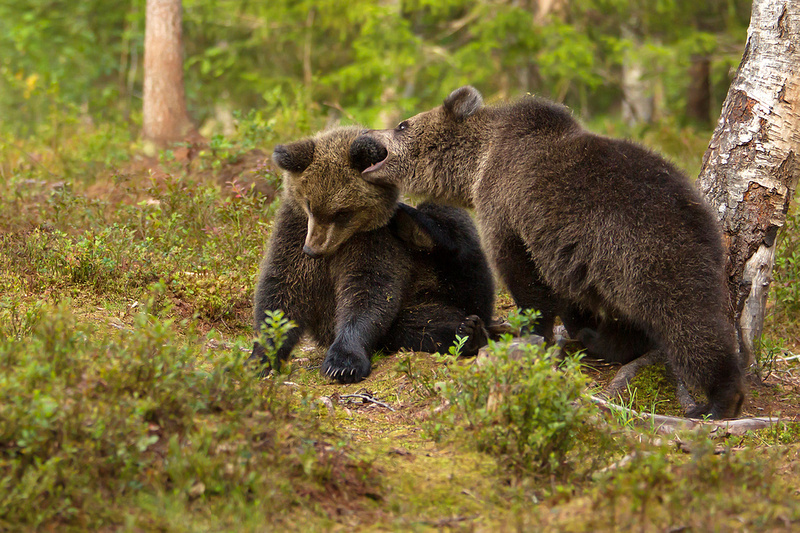 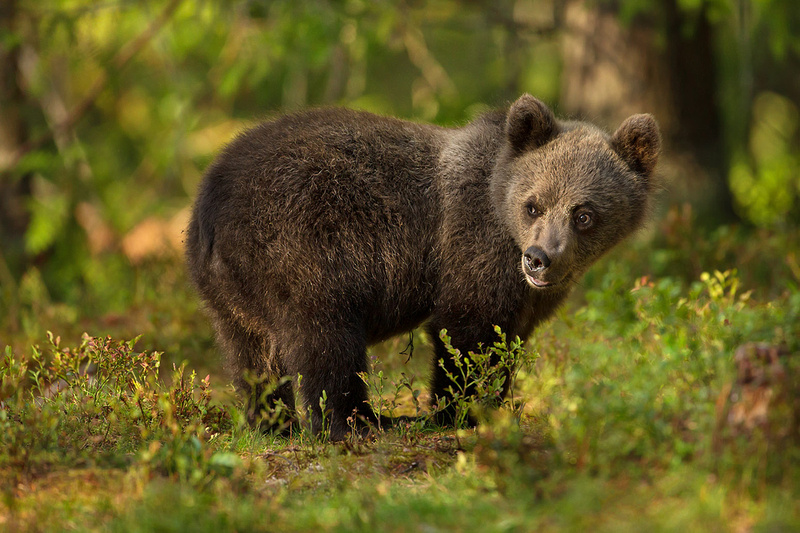 We never get bored of seeing brown bears and each trip presents itself with new challenges and opportunities.

Thank you for visiting. Hope you enjoyed it.

If you have any queries or would like to leave a comment, please drop as an e-mail.