We have spent two amazing weeks in the Falkland Islands photographing different species of birds and animals, but our primary target was penguins. There are five penguin species breeding on the islands. This blog is about Southern Rockhoppers.

Rockhopper penguin population is roughly 320000 pairs in the Falkland Islands (world population seeks 1 million pairs). They are one of the smallest and perhaps the most charismatic penguins. 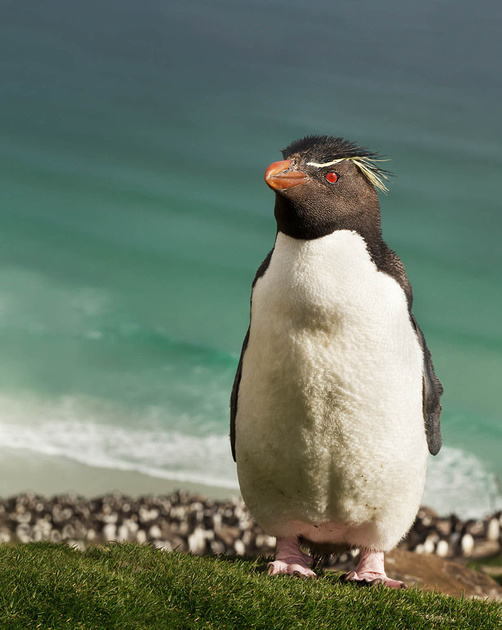 In the Falkland islands one of the best places to photograph Rockhoppers is Saunders island. We've stayed in two locations:  the Neck (three nights) and  Rookery (two nights).

The Neck is a sandy narrow strip which divides two large peaks. 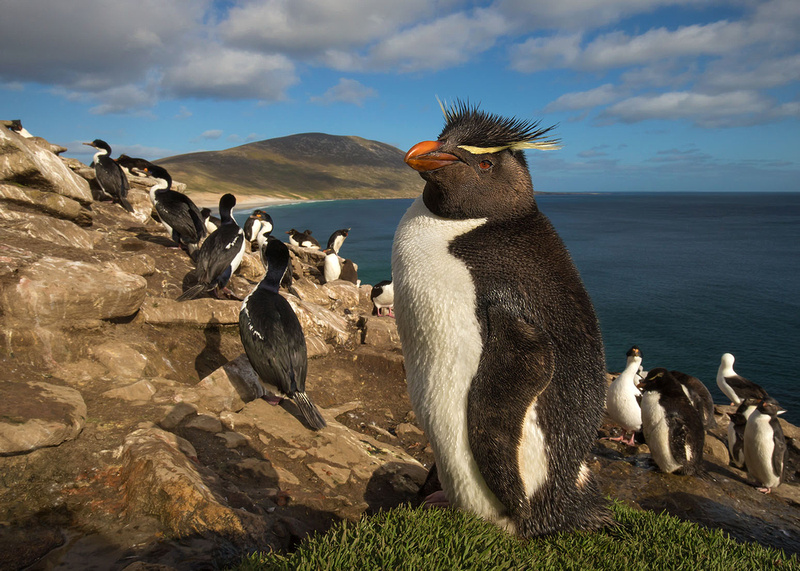 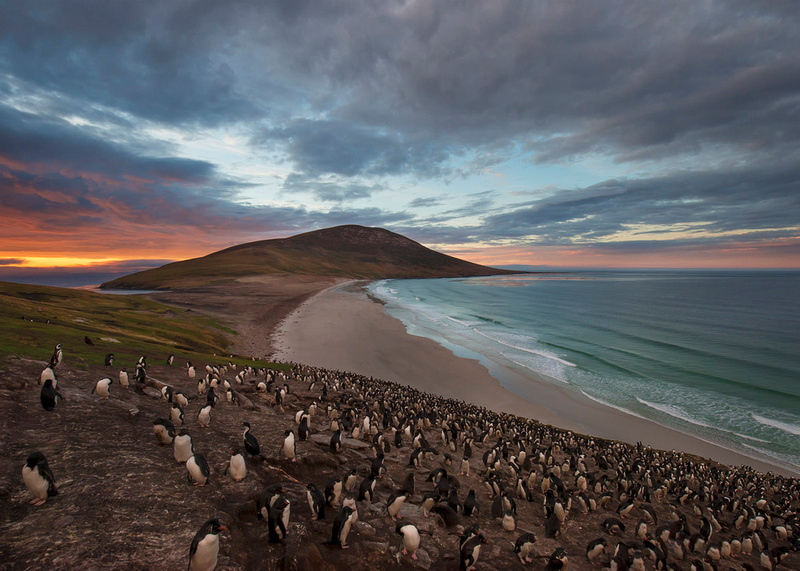 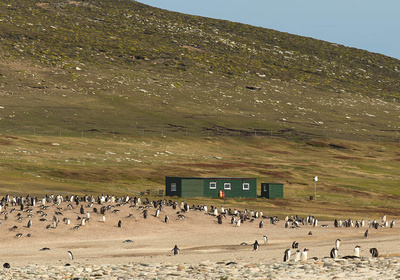 We stayed there in a small, very basic self-catering cabin close to Gentoo penguin colonies. There are no other places to stay.
The cabin has two rooms with two bunk beds in a room.
Rockhopper penguins can be reached on foot (roughly a 10 minute walk).
Rockhopper penguins are recognized by their yellow eyebrow above a red eye and yellow plumes at sides of head. 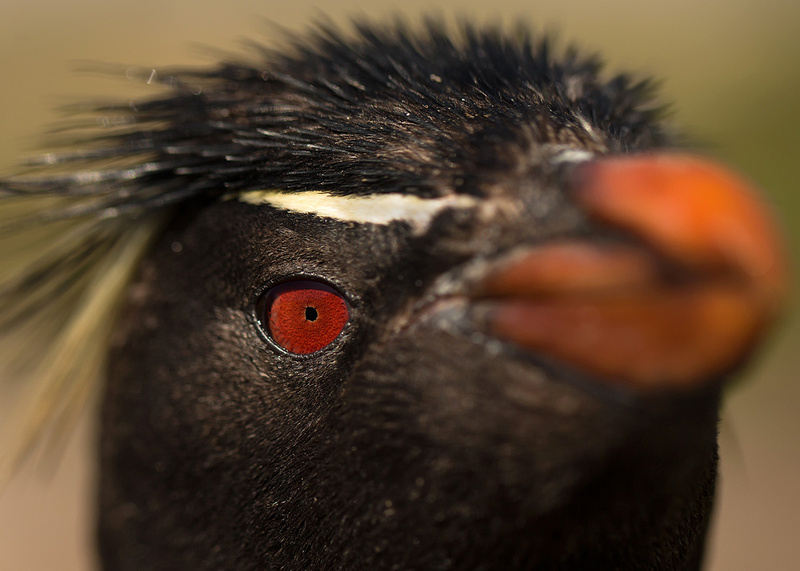 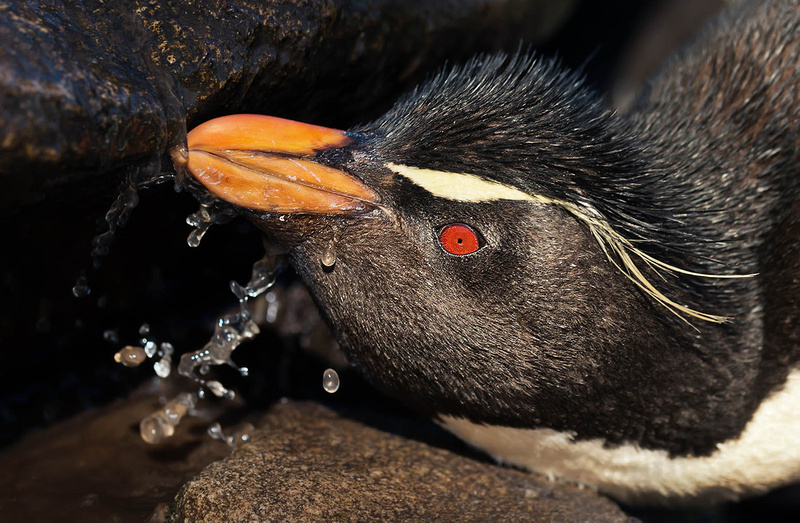 Close up of a Southern rockhopper penguin drinking water from a stream, Falkland Islands. 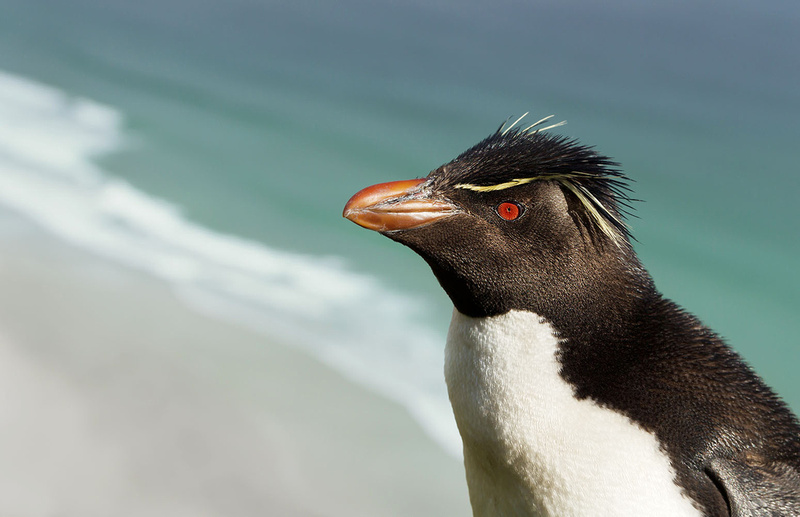 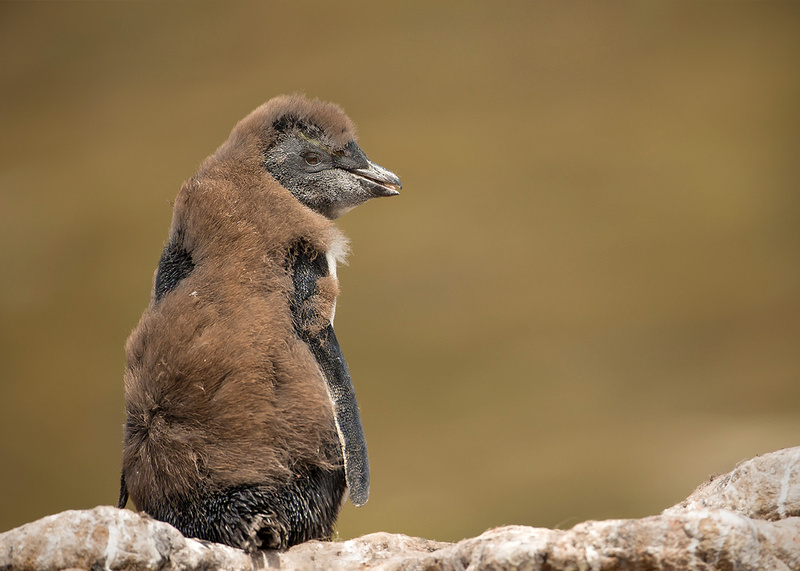 Rockhoppers who are part way through the moulting process look a bit funny.

Southern Rockhoppers are small penguins (average length of around 52 cm) but they have super strong little bodies. They hop great distances to their nesting sites up steep cliffs and incredibly easy get around rocky and dangerous places. 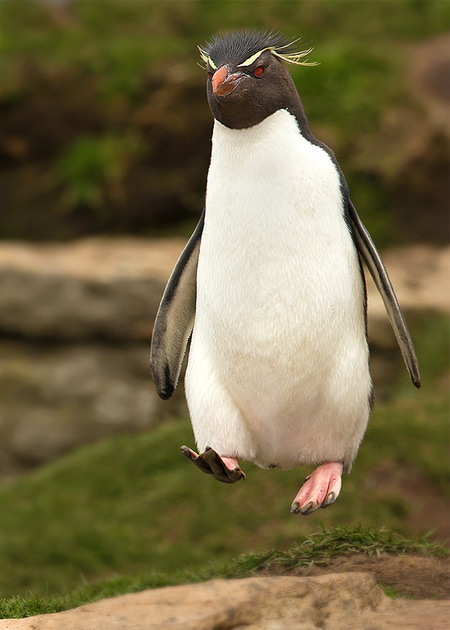 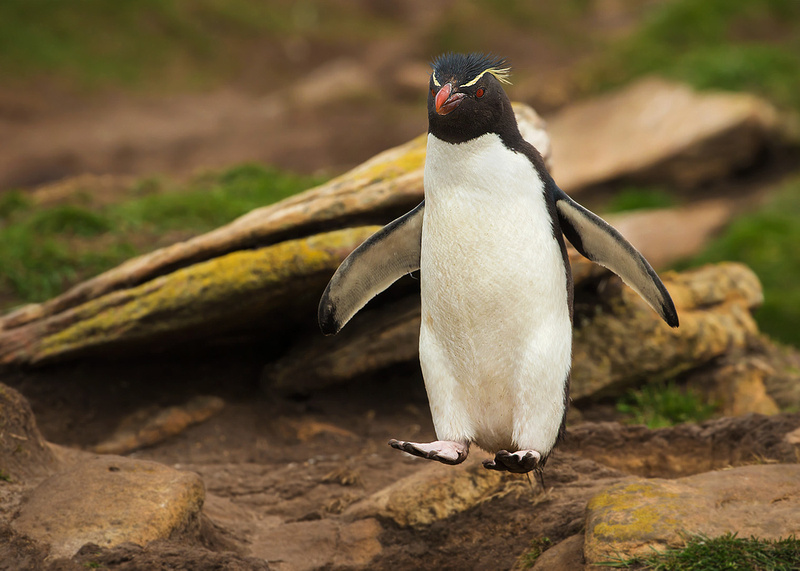 The ones who are not very confident in jumping are encouraged by others... 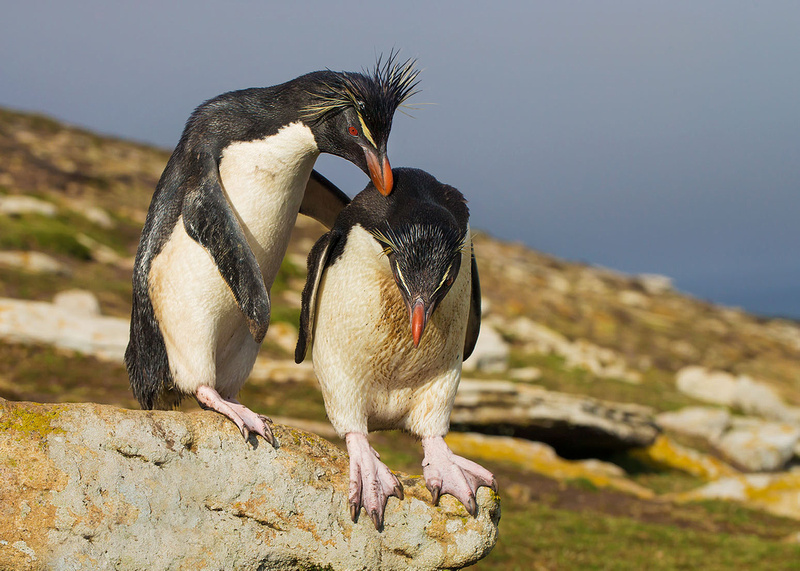 As we visited the Falkland Islands in late January, penguins already had their chicks. Nevertheless the birds carried on "refurbishing" their nests with stones and sticks. 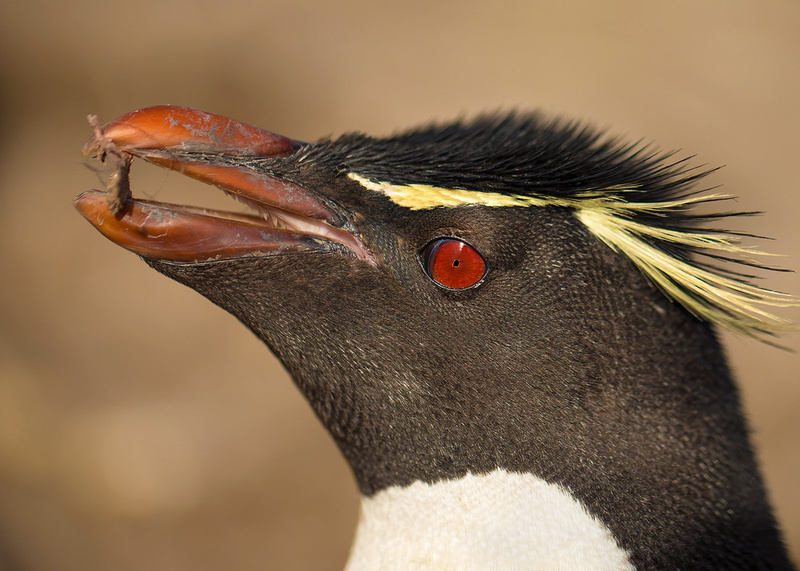 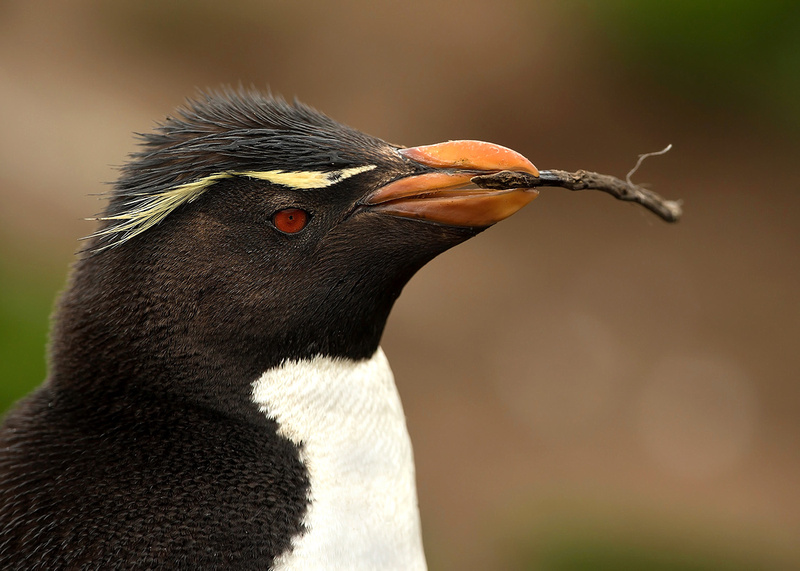 In general Rockhopper is quite an aggressive bird. Conflicts between the penguins are very common. 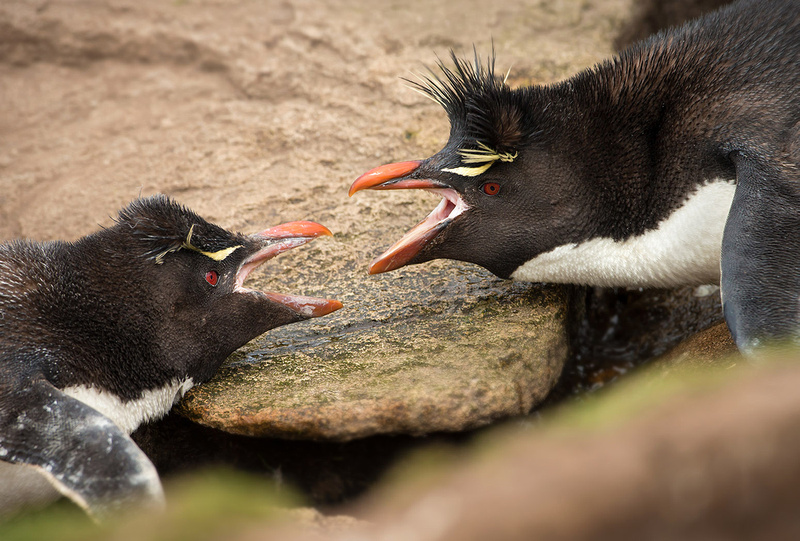 But we noticed some romantic moments as well. 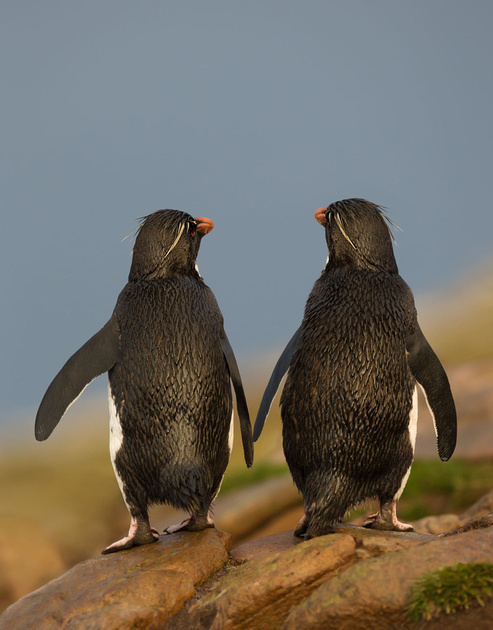 With hungry chicks to feed adult Rockhopper penguins head out to the sea to forage daily. It's a highly dangerous activity. Predators are not only in water but also on land. Southern Giant Petrels wait for a right moment to attack Rockhoppers. 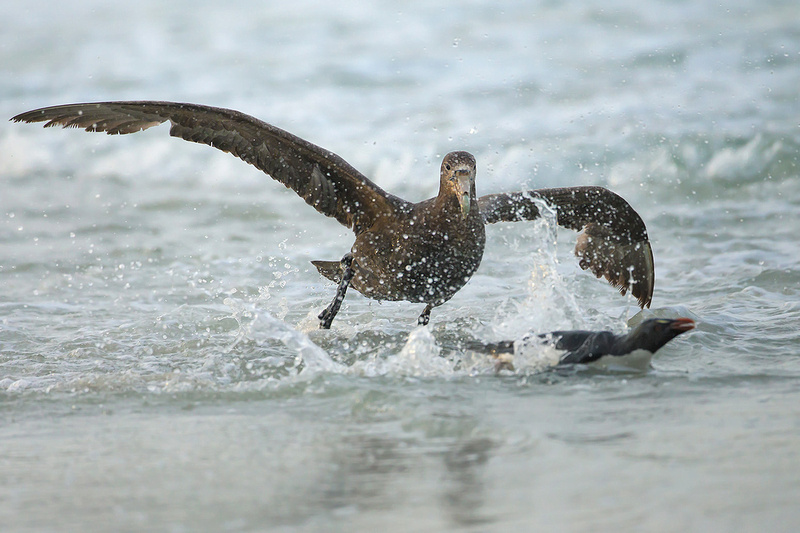 At the end of the day penguins return from the sea back to their colonies. 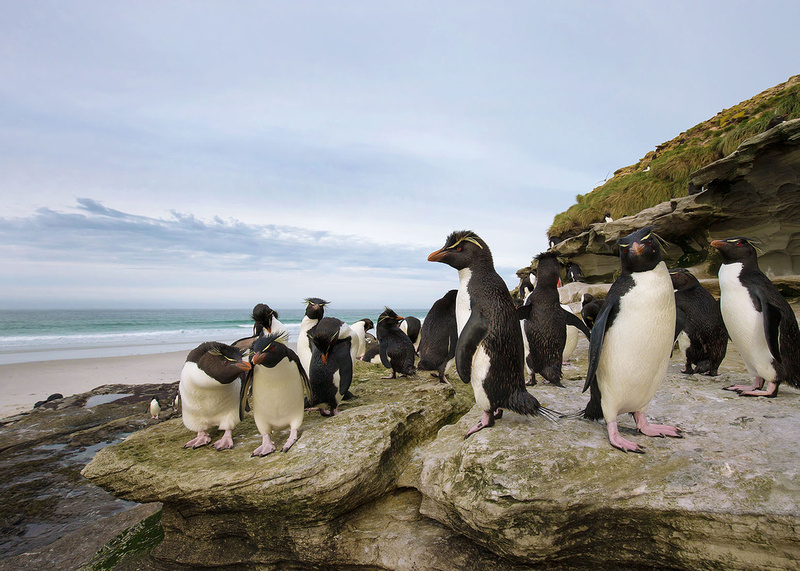 Unfortunately some come back with injuries. This Rockhopper got away from danger but may not survive. 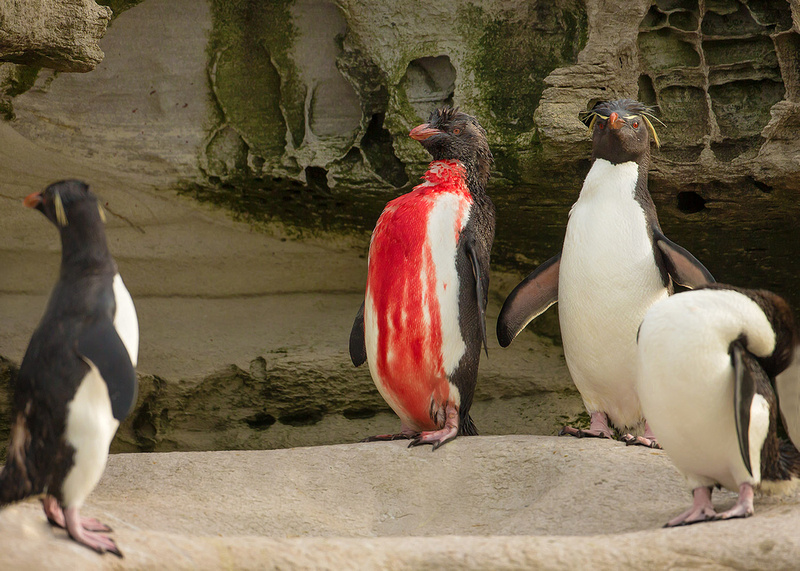 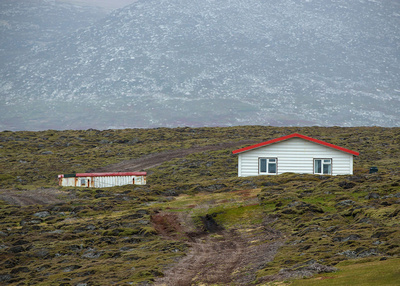 On the Saunders island The Rookery was our next destination.
There we've stayed in a cosy self-catering cabin.
Rockhopper “shower”- a stream running off the mountains - is the main sight of the island.
Admittedly upon reaching the Rockhopper colony we had a bit of a shock because we could not see the “shower”. Only later when we started climbing down the cliffs following the penguin highway we spotted a stream where penguins were taking a refreshing shower. These little chaps sometimes need to wash their bodies not only from salt but also from smelly guano. 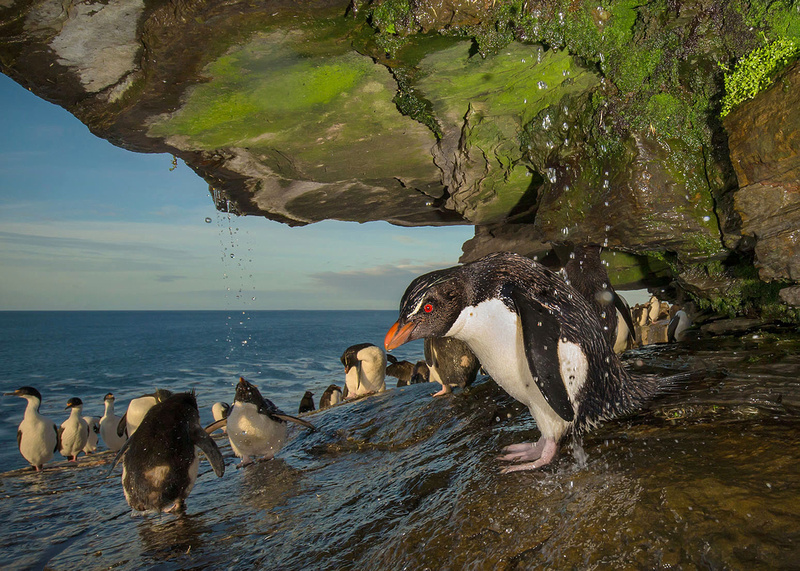 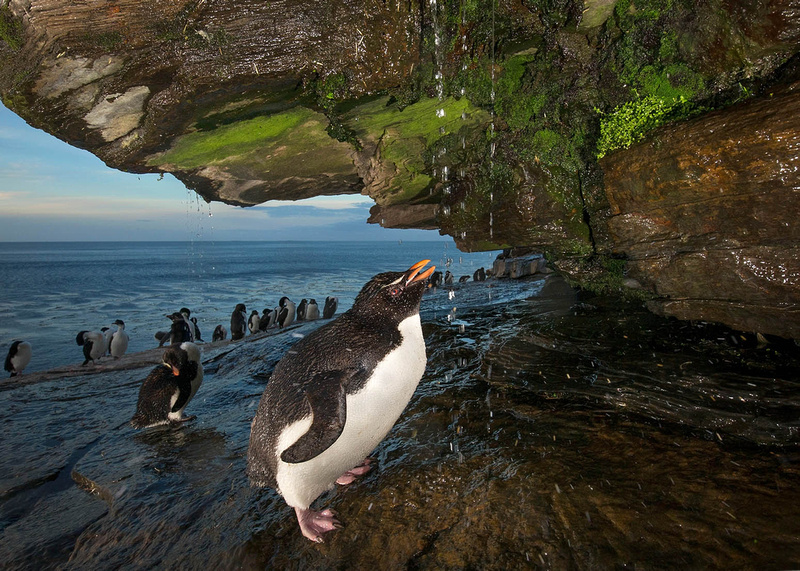 Up the cliff there is a healthy Rockhopper population where cute chicks provide hours of enjoyment. 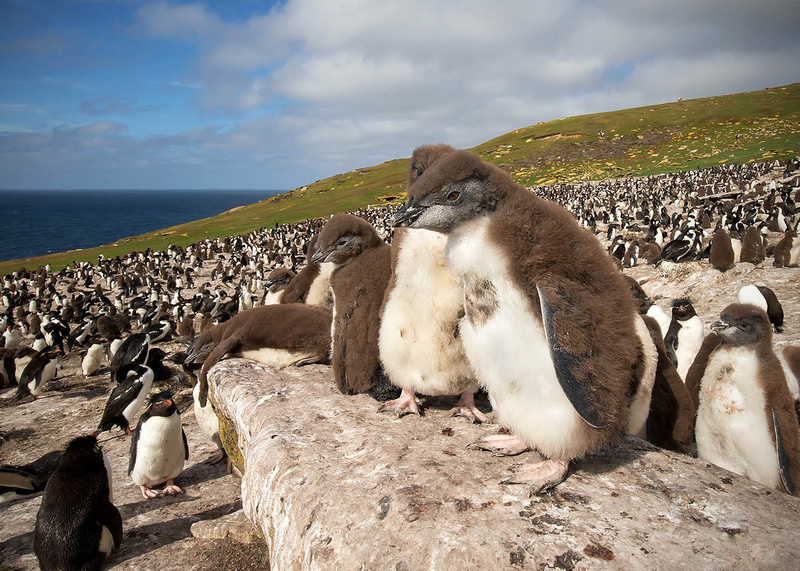 King Cormorants nest tightly in the neighbourhood of Rockhoppers. 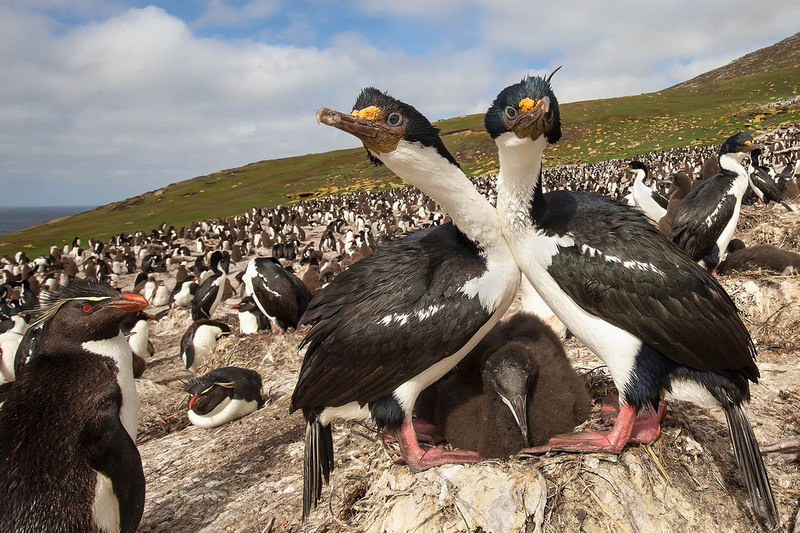 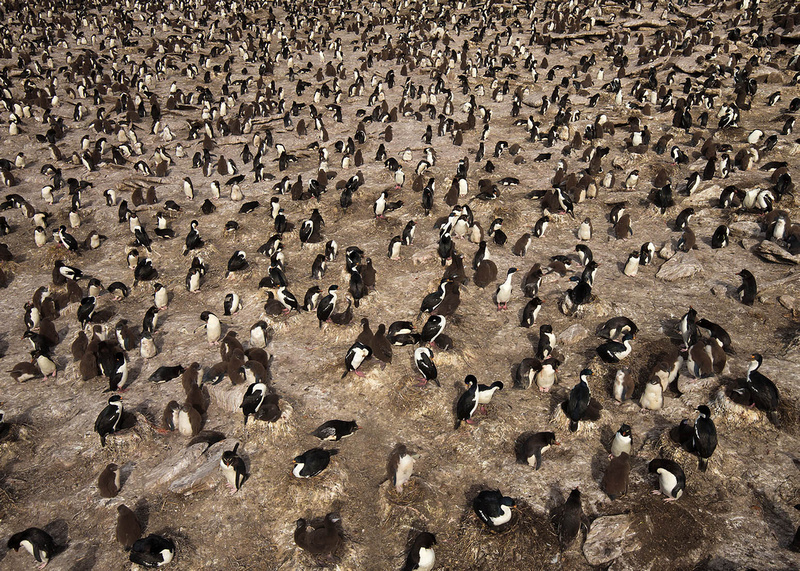 Such colonies provide not only interesting observations but also super strong smells from guano, urine and regurgitated baby food. After couple hours of photography admittedly we smelt similar to Rockhoppers. 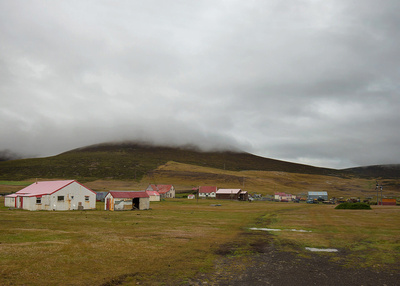 On the Saunders we've planned to stay 5 nights but on the departure day our flight was cancelled due to poor weather and thick fog.
We were accommodated in the Settlement - a place were the owners of the island live.
The following day the fog cleared away and we were on the way to Stanley airport. There we were picked up by a 4x4 vehicle to the Volunteer point to photograph King Penguins.
Information about travel arrangements and wildlife photography in the Falkland islands  you can find in this blog.